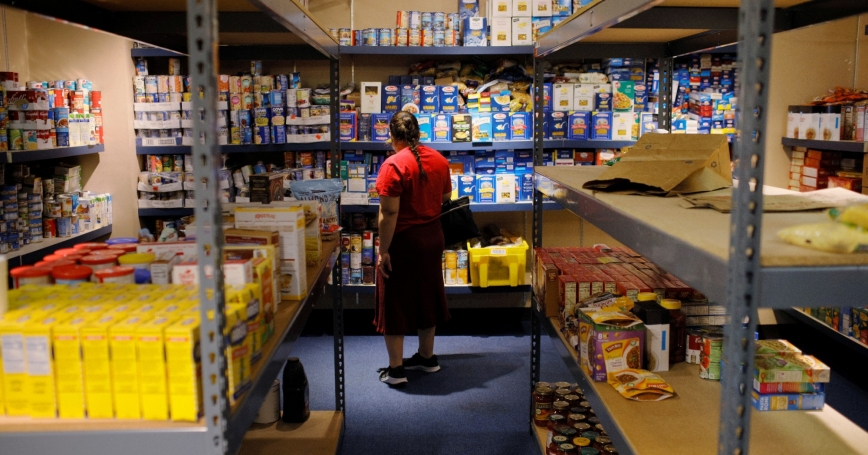 For more than a quarter century, the U.S. government has been sending an unmistakable message to poor, single mothers: Get married. If America genuinely wants to address poverty and achieve gender equality, this has to change.

Readers can be forgiven for missing last year's 25th anniversary of the Personal Responsibility and Work Opportunity Reconciliation Act, which proclaimed that “marriage is the foundation of a successful society” and fulfilled then-President Bill Clinton's earlier campaign promise to “end welfare as we know it.” There wasn't much to celebrate. A full generation later, the share of children in single-parent homes has increased, child poverty is mostly unchanged, and employment among unmarried (and married) mothers has plateaued.

In hindsight, one shouldn't have expected better from legislation so steeped in cultural myths. Single mothers had been labeled a social problem since the 1960s, even though their portrayal—as welfare queens and teen moms who didn't want to work—never matched the statistical reality. Just before reform, the median benefit (PDF) for a typical welfare family (a mother and two children) was a miserly $366 a month (or $658 including the value of food stamps), 70 percent of female recipients were older (PDF) than 25, and about half (PDF) stayed on welfare no more than a year—most commonly leaving the program for a job. In the three decades before 1996 (PDF) (and the quarter century that followed) unmarried mothers worked more than married mothers. Welfare rolls were increasing in the early 1990s, but that was in no small part because the United States had just been through a deep recession.

Single mothers had been labeled a social problem since the 1960s, even though their portrayal—as welfare queens and teen moms who didn't want to work—never matched the statistical reality.

True, families headed by unmarried mothers were very likely to be poor. (This is still the case: More than 30 percent of them are below the poverty line today.) This wasn't for lack of effort. Many jobs in the United States didn't (and still don't) pay enough to support a family on a single income. The inflation-adjusted hourly wage for the bottom 10 percent of female earners has hardly budged in 50 years: It was $8.24 in 1973, and it reached $10.52 just before the pandemic hit. At that rate, someone who works 35 hours a week, the national average, earns just over $19,000 a year. Worse, such low-wage jobs offer little security, with fluctuating, insufficient hours or frequent layoffs.

Instead of addressing this economic problem head on, Congress chose to address the social phenomenon—the unmarried part, rather than the poor part. The 1996 legislation turned welfare into block grants to states, which had broad discretion. The money could be given as a temporary cash benefit to women and children, but the other three specified uses were: promoting work and marriage, ending out-of-wedlock pregnancy, and encouraging two-parent families. Congress averred that mothers should be married, then gave states money to support the effort.

States have treated the block grants (called Temporary Assistance to Needy Families, or TANF) as a slush fund, to support things as varied as childcare subsidies, drug courts, college scholarships, textbooks, preschool, free marriage classes, and pregnancy crisis centers that counsel against abortion. Sometimes the money simply plugs holes in the state budget. In at least one case, the funds have been grossly embezzled.

The two most important policies to encourage women to work are mandatory paid family leave and broadly subsidized childcare.

Some would argue that the references to marriage in the 1996 law were merely rhetorical, not intended as an anti-poverty policy. Maybe. But Congress soon clarified in the Defense of Marriage Act that marriage was between a man and a woman, and reformed the tax code to be more pro-marriage. Follow-on proposals included earmarking TANF spending for marriage counseling. Marriage promotion remains prominent in anti-child-poverty agendas today.

Others would argue that the legislation was about promoting work, and should be viewed in the context of other congressional action, such as the increase in the Earned Income Tax Credit, which subsidizes single mothers' low wages. But if lawmakers want to encourage women to work, there are much better ways: Research unambiguously demonstrates that the two most important policies are mandatory paid family leave and broadly subsidized childcare. The United States remains the only developed country with neither.

Congress enshrined into law the opinion that mothers should be married. However hollow that 1996 avowal to marriage was, Congress has not, in the 25 years since, said that mothers should have paid family leave, or affordable childcare, or a wage that lifts a family out of poverty. The persistence of poverty among unmarried mothers offers a reminder that economic problems need economic solutions.

This commentary originally appeared on Bloomberg on April 4, 2022. Commentary gives RAND researchers a platform to convey insights based on their professional expertise and often on their peer-reviewed research and analysis.