Why Most of the Indo-Pacific Tiptoes Around Russia 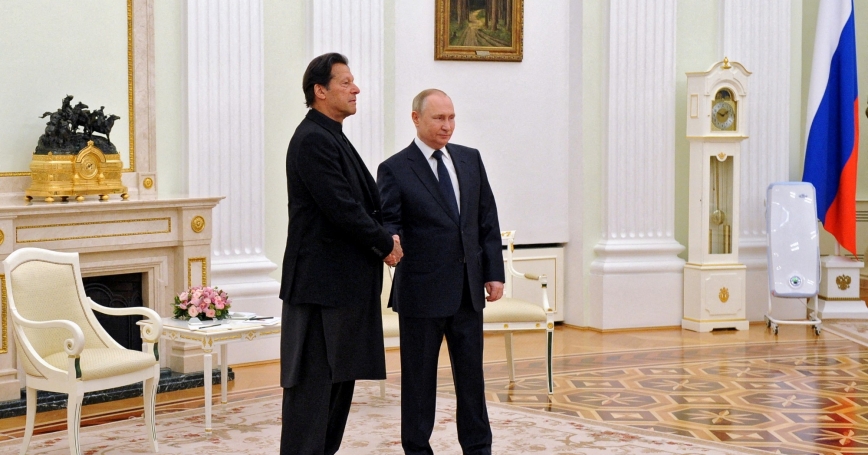 Since the start of Russia's increasingly brutal war in Ukraine, the West has ramped up pressure on the rest of the world to condemn Moscow's belligerence and join sanctions against Russia and its regime. In the vast Indo-Pacific region, however, the West's message has fallen flat. Only six staunch U.S. allies and partners there—Australia, Japan, New Zealand, Singapore, South Korea, and Taiwan—have joined Western sanctions or initiated their own. The rest of the region has refused to join the West thus far. That's in large part because most of these countries are already struggling to position themselves in the intensifying competition between the United States and China—and the emergence of an additional superpower conflict between the United States and Russia increases the perceived risks of aligning with the West, especially when Moscow and Beijing are working so closely together.

The most notable of the region's abstainers, of course, are the two heavyweights: India and China. From a grand strategy perspective, they are leveraging the crisis to hasten the transition from a unipolar to a multipolar international order to reduce the West's ability to dominate the system. Despite edging closer to Washington in recent years, New Delhi has notably refused to condemn Moscow, mainly because India continues to be highly dependent on Russian weapons to maintain its military—a close relationship that dates back to the Cold War and one that India doesn't want to put at risk. Shortly before the Russian invasion, Chinese President Xi Jinping promised Russian President Vladimir Putin friendship with “no limits,” a manifestation of the two leaders' common vision of pushing back against what they perceive as encroachment by the West. Both India and China have exploited the crisis to buy up Russian oil and other commodities at a heavy discount now that some Western countries are cutting imports (though Russian supplies still make up only a small share of their imports compared to most European countries). To facilitate these purchases and help Russia reduce its dependence on U.S. dollars, India is even reportedly devising a rupee-to-rubles currency swap arrangement.

The benefits of siding with the West simply do not outweigh the tangible national security benefits of healthy bilateral ties with Russia.

India and China's positions are therefore no surprise. What's more remarkable is how few other countries in the region have joined efforts to punish Russia. To be sure, many Indo-Pacific governments have voiced their concerns at the United Nations, where the Security Council and General Assembly have voted on nine resolutions related to Russia and Ukraine since the start of the war. But all of these were nonbinding resolutions, which require nothing of supporters and thereby remain relatively easy and low-risk. Even then, key countries including Vietnam—an emerging U.S. partner—have consistently abstained from Russia-related votes.

One reason so many countries in the region are doing their best to lie low is that the benefits of siding with the West simply do not outweigh the tangible national security benefits of healthy bilateral ties with Russia. It's by no means just India that benefits from Russia's role as a major supplier of arms, energy, and commodities to the region. Vietnam is similarly dependent on Russian weapons for the modernization of its military and would not want to risk losing access to its main supplier. Indonesia may also decide to purchase Russian oil at a discounted price.

Even more importantly, for most of the region's small and medium-sized countries, the current standoff between Russia and the West could exacerbate what is already a very intense U.S.-China competition throughout the Indo-Pacific. With Moscow and Beijing openly and closely coordinating their opposition to the West, smaller countries are probably inclined to stay out of the fight for fear of reprisals from both nations. From the smaller countries' perspective, balancing great powers and staying out of their conflicts is a survival mechanism—hence they remain on the sidelines over Ukraine. Only if Russia's war in Ukraine sparks a major global conflagration would they consider overtly taking sides—but even then, many would likely try and stay neutral to avoid being on the wrong side of the victors.

In Southeast Asia, countries staying out include not just Brunei, Indonesia, Malaysia, and Vietnam but two U.S. treaty allies: the Philippines and Thailand. Even as Western nations strive to kick Russia out of various international forums, Indonesia is planning to allow Putin to attend the G-20 summit it is hosting in Bali in late 2022—over Western objections. The same basic story is true in South Asia, where not a single state has endorsed sanctions.

In Oceania, several Pacific island states have condemned Moscow and threatened punitive measures, but none has followed through. The Marshall Islands, for example, is considering a ban on Russian-owned yachts and other ships from entering its waters; with one of the largest ship registries for private and commercial shipping worldwide, the country would play a key role in restricting Russian-owned shipping. The Federated States of Micronesia—a former U.S. trust territory that generally aligns with Washington—severed diplomatic relations with Russia, landing it on Moscow's “unfriendly countries” list, but has not supported sanctions. The Solomon Islands condemned Russian aggression against Ukraine but also refrained from further action. The acting prime minister of Fiji, which chairs the Pacific Islands Forum this year, refused to condemn Russia by name on behalf of all Pacific island states.

Another driver of Russia policy in the Indo-Pacific is ideology. Laos and Vietnam abstained from recent Russia votes at the United Nations, presumably in part because they share Russia's authoritarian system of government and distrust for the democratic West. Myanmar, which has been under military rule since last year, supports Russia outright. Authoritarian Cambodia, surprisingly, voted with the West to condemn Russia at the United Nations—perhaps because it holds the rotating chair of the Association of Southeast Asian Nations this year and wants to look like a responsible steward. North Korea has predictably cast its lot with Putin and has exploited the distraction provided by the war to prepare a new long-range ballistic missile test, its first since 2017.

If Moscow ramps up the carnage and if the atrocities committed in the liberated Kyiv suburbs are just harbingers of worse to come, it might become easier to convince several nations to do more.

Finally, several Indo-Pacific states have their own particular reasons for their Russia policy. Pakistan, leery of U.S.-Indian rapprochement, is just beginning its partnership with Moscow and does not want to ruin the good momentum. Pakistani Prime Minister Imran Khan was the first foreign leader to visit Putin in Moscow after Russia launched its war—and rather than avoiding that awkwardness by postponing the trip, Khan showed up anyway, underscoring how intent he is to cement ties. Mongolia, while leaning pro-Western in many ways, also abstained at the United Nations on Russia-related matters, not least because it borders Russia and is highly dependent on it politically and economically.

Clearly the West will struggle to receive additional support in the Indo-Pacific for sanctions against Russia. That said, if Moscow ramps up the carnage and if the atrocities committed in the liberated Kyiv suburbs are just harbingers of worse to come, it might become easier to convince several nations to do more. But the reality is that most countries will likely continue to resist Western pressure due to a combination of distrust of Western motives and desire to preserve the benefits that come with healthy Russia ties. Concerns that any open alignment with the West might cause blowback from not only Russia, but China, too, likely play a significant role for most smaller Indo-Pacific nations as well. In the future, Western capitals should keep these factors in mind—and be realistic about the extent to which they'll have the Indo-Pacific in their corner when punishing Moscow.

This commentary originally appeared on Foreign Policy on April 6, 2022. Commentary gives RAND researchers a platform to convey insights based on their professional expertise and often on their peer-reviewed research and analysis.