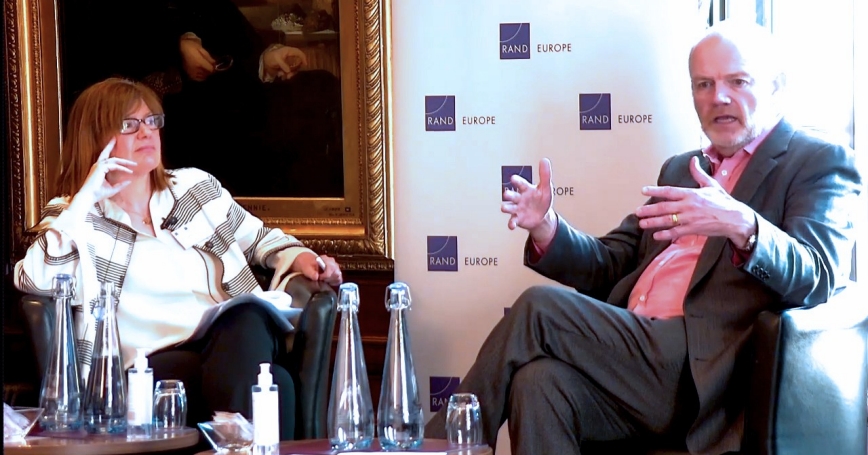 Mark Thompson (r) discusses disinformation with Jessica Cecil at the RAND Europe Council of Advisors meeting in London, UK, May 6, 2022

As former head of the New York Times and the BBC, Mark Thompson has tackled disinformation on both sides of the Atlantic. One of his big takeaways: It's not as easy as you might think to sustain a successful disinformation campaign.

“That's a powerful message, but it's the kind of diagnosis I find inadequate—as if the public are innocent victims of disinformation and the only policy challenge we face is dealing with the bad actors who either create or distribute it.”

Thompson suggested paying more attention to the “demand side” of disinformation. Many members of the public go out and actively look for it,” he said.

On the plus side, Thompson reckons lessons must have been learned from the “wholly inadequate” messaging around Afghanistan withdrawal. “We get to early 2022 and now we're seeing highly effective, proactive, and sometimes preemptive Western messaging” about Russia's designs on Ukraine.

Those messages, particularly from U.S. and British government spokespeople, were more proactive and transparent. “Western messaging indicated what would happen—and then it happened. That reinforces trust in government messaging,” Thompson said.

That's not what emanated from the U.S. government at the beginning of the COVID-19 pandemic in 2020, in Thompson's view.

Once you start lying to the public, then the public says, well, why should we believe you now. Even quite small, well-intentioned mistakes like that can really impair public trust.

“We saw well-intentioned disinformation,” he said. “Essentially, we were lied to about actual knowledge of use of masks, which we knew from SARS worked. It's hard to overestimate how damaging that was. It poisoned the water right at the beginning of the pandemic. Once you start lying to the public, then the public says, well, why should we believe you now. Even quite small, well-intentioned mistakes like that can really impair public trust.”

When it comes to freedom of speech, Thompson, perhaps not surprisingly from the perspective of a journalist, sees the biggest danger as coming from government. “The more zeal and passion I see for government to 'do something' about disinformation, the more nervous I get.”

Potential solutions? Thompson has a few.

“One good premise is to think of people we're addressing not as helpless sheep but as people as smart and savvy as we are,” he said, referring to fellow journalists.

Another: “The government should start telling the truth—painful though it can be, all the time without fail—to the public.”

Regarding social media, Thompson cautioned people to carefully consider where and how they engage. “I don't tweet because I don't trust myself not to say something crazy when the red mist descends!”

Thompson offered some reassurance. In the 1600s, he noted, easily hidden printing presses led to a proliferation of pamphlets which some say helped create the conditions for the English civil war. Yet by the 1700s pamphlets were ubiquitous and less divisive.

“These things are socialized,” Thompson said, “and become part of the landscape.”