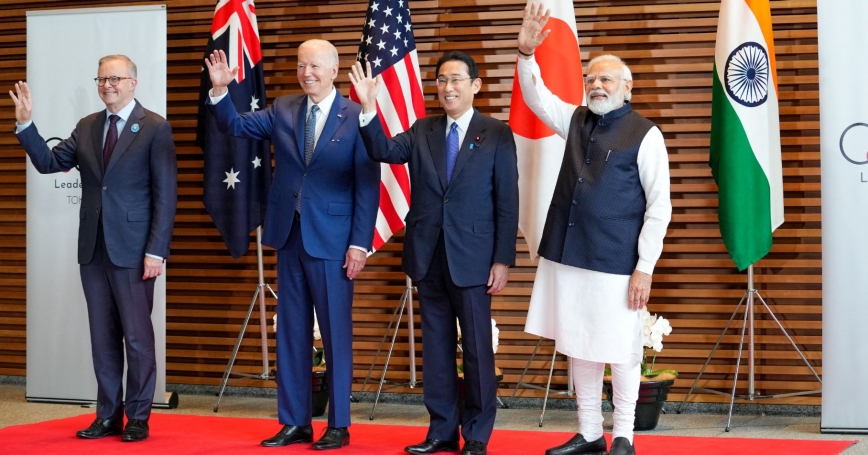 Photo by Zhang Xiaoyu/Pool via Reuters

Russia's war against Ukraine has upended decades of entrenched defense policy in Europe. The effects of the war stretch worldwide as countries monitor Ukraine's unfolding tragedy to glean possible lessons for their own security. Halfway around the world, two of America's staunchest allies, Australia and Japan, are closely watching the situation, actively supporting Ukraine and the West's efforts to stop Russian aggression.

At the same time, Russia's actions may serve as a warning to U.S. allies in the region, which see a possible future crisis in the Indo-Pacific brought on by China. Understanding how Australia and Japan are perceiving the Ukraine conflict could be critical for allied strategy in the region going forward.

Consider first Australia. Leading into the recent federal election, Australia's response to Russia's invasion had been partly influenced by a conservative government seeking to look tough on national security and take a leadership role in foreign affairs. Australia has applied sanctions against Russian enterprises, agreed to send a modest number of armored troop carriers to Ukraine and pledged around $65 million in humanitarian aid.

Australia also provided temporary humanitarian visas to Ukrainian citizens. With Russia and Australia on opposite geographic poles and virtually no trade to speak of, Australia has felt freer to criticize Moscow with impunity—unlike China, where its criticism carries a much greater cost. Australia is likely to maintain its political and practical support to Ukraine and its current hardline approach to Russia.

Understanding how Australia and Japan are perceiving the Ukraine conflict could be critical for allied strategy in the region going forward.

Compared to Australia, Japan has more skin in the game with Russia, but has adopted a similar approach regarding Ukraine. Despite being relatively new to office, Japan's prime minister, Kishida Fumio, has been tough and resolute in his response. For a country that historically does not rely on economic sanctions, Kishida surprised many by imposing harsh financial and economic sanctions against Russia, a sharp contrast to Japan's tepid response to Russia's annexation of Crimea in 2014.

Kishida's decision came at a cost, promptinging Russia to declare it was abandoning peace treaty talks over disputed territory with Japan (that were not really going anywhere anyway). The Kishida government also recently released its annual Diplomatic Bluebook (PDF) that, for the first time in almost two decades, declared the Southern Kuril island chain (northern territories in Japan) as “illegally occupied by Russia.” And, like Australia, Japan provided limited defense assistance to Ukraine: bulletproof vests, helmets, protective masks and clothing against chemical weapons, and other nonlethal equipment.

In addition to similar responses, the conflict has affected security discussions in these countries in common ways. In Japan, it has not led to a fundamental rethink in Japan's defense priorities. For example, discussions on issues such as “counterstrike capabilities” and increased defense spending have precedents that predate Russia's attack. Even the recent debate about “nuclear-sharing” is not new. But the war has made discussions on Japan's security a more widely public one, arguably leading to advancements in the public discourse on ways the government should defend Japan and involve itself in regional security.

Importantly, Japan's contribution of nonlethal military aid represented a change, marking the first of such type of assistance from Japan. What is unclear is how the war will impact the revisions taking place to Japan's National Security Strategy and National Defense Program Guidelines. With the first war in Europe in decades, along with fears of how this could manifest in the Indo-Pacific, it is unclear what lessons Japanese policymakers are drawing on to inform their new strategy.

In Australia, an unprovoked, conventional war in Europe, overlaid with China's creeping defense presence in the Indo-Pacific, have given greater public justification to the government's hard security push—whether it's the AUKUS agreement, accelerated defense acquisitions, or public admonishing of China. Although AUKUS attracted both supporters and detractors when announced (and continues to do so), criticism of Australia's large increase in defense spending and its potential to provoke China and others has abated as the harsh realities of conventional war sink in. While Australia's trend towards building more-robust defense capabilities predates Russia's invasion, instability in Europe, and Chinese coercion across domains are raising public threat perceptions more in line with government policy.

Russia's invasion of Ukraine has hardened Australia and Japan's defense trajectories and resolve. Although far outside of the European theater and from different defense, strategic, and military experiences, Australia and Japan have a shared concern that what they are witnessing in Europe could set a precedent elsewhere, including the Indo-Pacific.

Russia's invasion of Ukraine has hardened Australia and Japan's defense trajectories and resolve.

Should allied nations fail to punish a powerful neighbor like Russia for attempting to change the status quo through force, it could send the wrong signals to autocratic countries elsewhere, which may be tempted to use force as a viable means of obtaining a national security objective. In both their cases, the overriding concern is China being tempted to use force to obtain Taiwan. It is through this lens that their active support of Ukraine can be better understood. It also might explain more-vigorous defense debates and both allies advocating for enhanced alliances with the United States and their strategic ties with each other.

While Russia's invasion of Ukraine drove both Canberra and Tokyo to recalibrate their foreign policy priorities, it has confirmed the defense trajectories they have been following for some time. Both countries responded to the crisis through close coordination with the United States and their European partners. Similarly, both countries sought policies to support the international status quo. While it remains unknown what lessons Beijing is drawing from Russia's invasion, it seems to have already galvanized two of the United States' closest allies in their commitment to bolster their defenses and work closely with like-minded allies.

Now, Australia and Japan will likely weigh the potential merits of maintaining course in order to work to ensure the Indo-Pacific avoids further comparisons with Europe.

Jeffrey Hornung is a senior political scientist at the nonprofit, nonpartisan RAND Corporation. Hayley Channer is a senior policy fellow with the Perth USAsia Centre and a Fulbright Scholar with the Hudson Institute.

This commentary originally appeared on The Hill on May 26, 2022. Commentary gives RAND researchers a platform to convey insights based on their professional expertise and often on their peer-reviewed research and analysis.