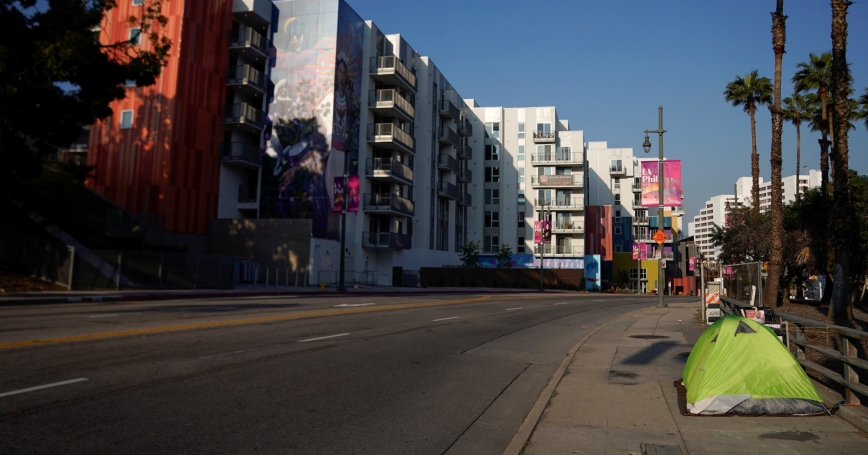 A tent on the sidewalk next to newly constructed apartment buildings in downtown Los Angeles, California, January 22, 2020

The state recently ordered cities across Southern California to plan for the construction of 1.3 million more housing units in the next eight years, including 8,874 in Santa Monica and more than  450,000 in the City of Los Angeles. Converting commercial buildings into housing is one approach that has been seized upon by local policymakers, current L.A. mayoral candidates, the county, and civic groups (PDF).

Recent research conducted by the RAND Center on Housing and Homelessness in Los Angeles suggests that such adaptive reuse of buildings can play a meaningful role: Conversion of a mix of hotel/motel, office, and retail properties could provide 9 percent to 14 percent of the needed additional housing countywide. But this outcome would likely only occur under optimal conditions. Numerous financial and regulatory barriers stand in the way of this potential yield.

At current market prices for commercial real estate and apartment buildings, the financial feasibility of adaptive reuse projects varies widely. For example, the average price per room of economy hotel/motel properties in the Los Angeles region is substantially lower that of studio apartments. This positive gap ranges from $125,000 to $250,000. So hotel/motel conversions could consistently “pencil,” or be a financially attractive proposition, to developers.

Office properties, on the other hand, generally command higher prices. The average market price of a two-bedroom apartment is significantly lower than that of a similar-sized office space. This size of this negative financial gap ranges from $100,000 to $400,000 per unit, suggesting that converting office properties to family housing may rarely pencil out for developers.

Unfortunately, the less-expensive hotel/motel properties are often in lower-income areas that are remote from many jobs. Areas such as West LA, where proximity to jobs and other factors would make additional housing a socially beneficial proposition, have a concentration of higher-priced office space. Subsidies or incentives might be needed to make adaptive reuse work financially in these higher-resource areas.

It is also possible for existing owners of commercial properties to convert their own buildings to residential use. The attractiveness of this proposition may increase if, for example, persistently high vacancy rates and the growth of permanent remote work policies continue to reduce demand for office space.

Adaptive reuse can be incredibly effective. In the early 2000s, for instance, L.A.'s Downtown Adaptive Reuse Ordinance reduced regulatory barriers and created a host of incentives. It was credited with spurring the production of thousands of units of housing in old office buildings and disused hotels.

Cities might be able to speed some projects along by streamlining approvals for adaptive reuse of commercial buildings that have dual zoning for residential use. Such conversions currently endure a cumbersome discretionary approval process triggered by the change of use.

Cities might be able to speed some projects along by streamlining approvals for adaptive reuse of commercial buildings that have dual zoning for residential use.

Additionally, creating a dedicated funding stream for adaptive reuse projects that include affordable units and are sited in areas where new housing could yield large social benefits may incentivize new projects where they are needed most.

Project Homekey, a state-funded program, led to the conversion of scores of hotel/motel properties into housing for people experiencing homelessness during the pandemic. That success showed how quickly adaptive reuse can provide desperately needed housing—and how affordably. Early evidence suggests that Homekey developments are 30 percent to 40 percent cheaper than constructing new permanent supportive housing projects.

Adaptive reuse has tremendous promise for making a dent in Southern California's housing shortage, but realizing its full potential will require thoughtful and timely policymaking.

Jason Ward is an associate economist at the nonprofit, nonpartisan RAND Corporation and associate director of the RAND Center on Housing and Homelessness in Los Angeles.

This commentary originally appeared on Santa Monica Daily Press on June 6, 2022. Commentary gives RAND researchers a platform to convey insights based on their professional expertise and often on their peer-reviewed research and analysis.