Science and Security: Setting the Direction for the UK's Research Relationship with China 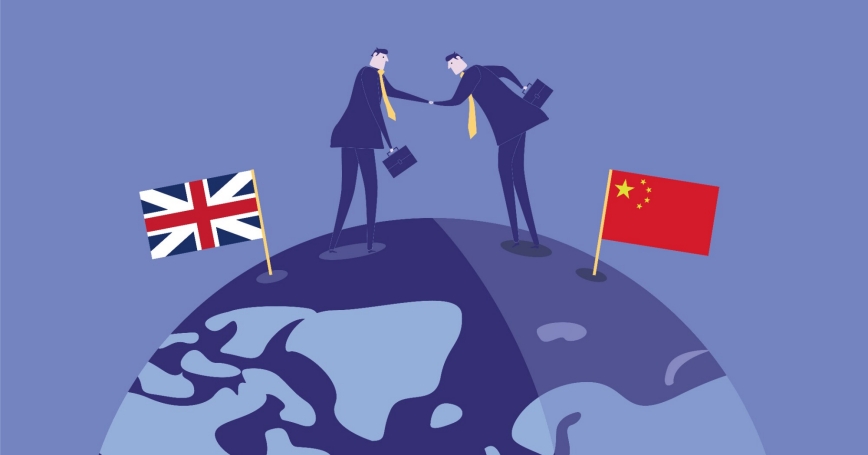 The United Kingdom's relationship with China has undergone remarkable transformation in recent times. After enjoying a mutually proclaimed 'golden era' of collaboration throughout the 2010s, concerns over China's ambitions and its threat to UK security have infused the bond between the two nations with suspicion. The idea of decoupling from China, at least in certain aspects, has been raised frequently in the early 2020s—most recently following Russia's invasion of Ukraine, which prompted Liz Truss to announce to China in April 2022 that 'we have shown with Russia the kind of choices we're prepared to make when international rules are violated.'

One form of UK-China cooperation which is particularly fraught is academic collaboration. Research conducted by RAND Europe reveals the two countries' research systems are deeply entwined: in January 2022 the United Kingdom and China shared 156 joint research centres, involving 106 UK and 184 Chinese institutions. Academic papers involving researchers based in both the United Kingdom and China constitute roughly 11 percent of the UK's research output.

To some, such extensive academic collaboration undermines UK security. Concerns over dual-use technologies, intellectual property theft, and the geopolitical implications of a technologically emboldened China are leading influential figures to question the value of UK-China research collaboration. Tom Tugendhat, Chairman of the Foreign Affairs Committee, has argued that the United Kingdom should consider curtailing academic collaboration in science and technology on the basis that 'competitive advantage is being handed to a strategic adversary.'

Of course, it is crucial to consider the security implications of the United Kingdom's international academic collaborations. China's policy of civil-military fusion means that institutions like universities can supplement the Chinese Military. Wuhan University hosts a joint research institute with the Guangdong Military Region Air Force Engineering and Construction Bureau, for instance, meaning that collaborating with Wuhan University on certain Engineering topics could develop the Chinese military. China's human rights record is also dreadful, as the recently leaked Xinjang police files show in grim detail with regard to China's treatment of its Uyghur population.

These dangers are serious and well documented. Yet there are other, more-nuanced risks involved that are often lost in discussions of UK-China collaboration. One of the core findings of RAND Europe's research paper on UK-China collaboration, published in June 2022, was that the UK research community highly valued working with Chinese researchers. Across numerous different disciplines, experienced researchers emphasised the expertise and rigour of their Chinese counterparts. Collaborating with leading researchers in China allows UK researchers to find innovative solutions to shared problems, such as those in health sciences, food security, and climate change. Alongside the stark dangers of connecting UK and Chinese academics, therefore, there is another risk to consider: that of not collaborating at all.

Alongside the stark dangers of connecting UK and Chinese academics there is another risk to consider: that of not collaborating at all.

Isolating the United Kingdom from China academically could reduce the UK's capacity to deliver innovative science, and to work on common issues that cannot be tackled alone. The danger of cutting China loose is in depriving our research communities of valuable partners—partners with whom engagement can sustain the United Kingdom's academic excellence—and in isolating a growing technological superpower which the United Kingdom may to some extent have to work with over the coming decades in order to tackle global challenges.

So, when discussing the security implications of UK-China collaboration it is crucial to consider all the available perspectives. The positivity of UK academics should not be seen as an uncritical argument for open collaboration. Rather, such views highlight the need for nuance and detail when treading the fine line between benefits and challenges regarding academic collaboration.

The Need for Knowledge

The problem is that such nuanced debates on China policy are difficult when the United Kingdom knows so little of its counterpart. As explained in both 2020 (PDF) and 2022 (PDF) HEPI reports on UK-China collaboration, the United Kingdom is hamstrung by its limited understanding of Chinese culture, language, and strategy. The United Kingdom produces just 250 China studies graduates a year, and many of the interviewees spoken to by RAND Europe felt there was little informed guidance on how to engage.

UK-China research has the potential to sustain the very forms of academic excellence that a more-isolationist approach sets out to protect.

Having a strong level of knowledge of China is vital to ensuring a coherent strategy for international partnerships. The United Kingdom's China policy of 'strategic ambiguity' was criticised by academics who spoke to RAND Europe and HEPI on separate projects for the lack of guidance it offers academics navigating a complex research environment. In contrast, China's policy towards UK partnerships appears more developed. It involves prioritising research areas of strategic significance and funnelling funding and partnership deals towards them, giving rise to large numbers of UK-China partnerships on specialised STEM subjects. The United Kingdom could therefore learn from this targeted and strategic approach to partnering with China. It could also form and communicate far clearer ideas on how to engage, for instance through the formation of centralised strategy groups (PDF).

So, it is clear that certain forms of research engagement with China pose security threats. Yet so, too, does the heavy-handed response of cutting research ties that some suggest, only in different ways. UK-China research has the potential to sustain the very forms of academic excellence that a more-isolationist approach sets out to protect, while also raising the possibility of bridge-building and tackling shared problems. For this to become a reality, knowledge and understanding of China in the United Kingdom must improve.

Peter Carlyon is a research assistant at RAND Europe.

This commentary originally appeared on Higher Education Policy Institute on June 27, 2022. Commentary gives RAND researchers a platform to convey insights based on their professional expertise and often on their peer-reviewed research and analysis.