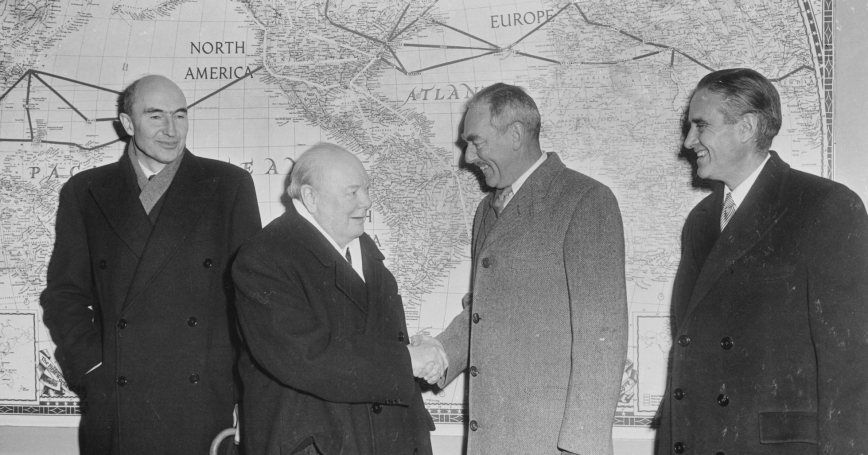 by Christopher Paul and Matt Armstrong

“There is no question today that the policies and actions of the US are often misunderstood and misrepresented abroad.” Secretary of State George C. Marshall spoke those words before Congress in 1947, and yet they are just as true—possibly even truer—today, as major U.S.-competitors have built up well-funded and organized entities that constantly mislead audiences about U.S. policies and motives. Russia, for example, uses its global state-run media, such as RT and Sputnik, as well as hordes of paid internet trolls; it leverages ideological and profit-minded fellow travelers to unleash a “firehose of falsehood” that undermines the credibility of all news sources; all while promoting narratives that favor the Russian state. China has the equivalent of an entire military service—the strategic support force—devoted to information warfare, and a huge government entity, the United Front Works Department, that coordinates China's international exchanges and outreach, it also works to shape international public opinion of China.

Unlike these competitors, the United States government has failed to institutionalize the importance of information in foreign policy. The United States lacks formalized leadership structures to tackle these information issues head on, just as it lacks a central organization to coordinate activities to understand, inform, and influence foreign audiences. These are longstanding gaps, readily acknowledged in the policy analytic community since at least 2001 (PDF), and discussed at length throughout the first decade of the 21st century. And yet, these gaps persist today.

Among the persistent calls for improvement in U.S. information efforts is one to bring back the U.S. Information Agency (USIA), which was dismantled in 1999. But these calls miss an important point—USIA was disestablished for a reason: it was a marginalized agency, limited by design, separated from foreign policy, denied access to the National Security Council in 1969 by then-National Security Advisor Henry Kissinger, relentlessly attacked by Sen. J. William Fulbright for years (he opposed its creation and tried to kill the agency in 1972), and, thus hobbled, proved itself of questionable effectiveness as it limped into its final decades.

USIA never had the leadership role or the level of integration with American foreign policy that modern proponents imagine it did, and that contemporary levels of information competition and conflict demand. Further, the agency was not charged with countering foreign propaganda, the mission which motivates many of the demands for a new USIA; the best, and mostly forgotten example of such an effort was the short-lived Active Measures Working Group (PDF), which was formed in 1981 to counter Soviet propaganda.

What about the U.S. Agency for Global Media (USAGM), formerly the Broadcasting Board of Governors, which operated under USIA until 1999, when it became an independent agency? Is that the right model for integrating information in foreign policy? The USAGM's operations target countries relevant to U.S. national security and that lack a free press due to censorship (such as North Korea, Russia, and China), that are historically vulnerable (like Ukraine), or lack a foundation of professional news media (like Indonesia) or resources (like much of Latin America). USAGM's networks—Voice of America, Radio Free Europe / Radio Liberty, and others—do not, by law and on purpose, operate in or target democratic countries with a vibrant commercial press, which is the case for most of Europe. The USAGM is a surrogate news and information service to information-poor audiences providing content not just in the local vernacular, but based on their perspective, often with reporters from the area, often risking their lives in the pursuit of local journalism to inform and empower audiences. But the USAGM's power, its credibility—the backbone of which is its relationship with its audiences—would be at real risk if it were no longer operating separate from policy, if it were suddenly subject to micromanagement from policymakers and operatives across the other international information and engagement portfolios.

A better historical model for an agency that could fulfil the needs of our information-starved foreign policy space is USIA's short-lived predecessor, the IIA.

A better historical model for an agency that could fulfil the needs of our information-starved foreign policy space is USIA's short-lived predecessor, the International Information Administration (IIA). Formed in 1952 by Secretary of State Dean Acheson as a semi-autonomous operation within the State Department, the purpose of IIA was to streamline the management, budgeting, integration, and accountability of the government's overseas information and engagement programs. To give an idea of the scale, it was considerable: IIA included half of the State Department's personnel and more than 40% of the department's budget. During its short existence, IIA benefited from being integrated with the foreign policy apparatus. IIA chaired an interagency coordinating committee that included the State Department, CIA, the Defense Department, and the Mutual Security Agency, positioning it to help an increasingly complex government with consistency between words and deeds. The IIA Administrator reported directly to a Secretary of State who appreciated the importance of information to policy. The Administrator managed a portfolio broader than USIA's and with direct lines of authority into the State Department and across the field, owned the department's relevant relationships with interagency partners, and operated with a broader interpretation of “information” that included personal interactions abroad.

In addition to the educational and cultural exchanges that were under IIA—but were prevented from moving to USIA—the agency was charged with direct and indirect support for building local civil capacity abroad, facilitating foreign engagements with U.S. experts in diverse fields such as agriculture and census taking, public health and transportation, virtually none of which were later included in USIA's portfolio. One such IIA engagement saw a rural education expert sent to Turkey, resulting in the Turkish government sending 50 of its teachers to the U.S. for training. IIA also actively supported private foundations, community groups, and book and music publishers to tell America's story abroad. Overseas, the IIA empowered and protected staff in the field, so they could be agile while maintaining unity of policy, objectives, and voice with Washington across programs.

Though the agency met little resistance within the State Department, and its efforts appeared to be working, the IIA project ended after little more than a year, with the arrival of new administration that did not believe in its mission. The department's “lack of enthusiasm and imagination” and the “bureaucratic elephantiasis” that led Acheson to create IIA now motivated the Eisenhower administration to move some— but not all— of the IIA out of the State Department and form USIA, resulting in a 40% reduction of the State Department's personnel. Instead of fixing the State Department, the White House created a new agency. Eisenhower's Secretary of State, John Foster Dulles, was all too happy to be rid of the broader information and engagement mission he considered a distraction from the department's focus on traditional diplomacy. As if to underline its quiet demise, information about the IIA and its brief but largely successful history has never been organized and made available by the U.S. government.

Ultimately, what formed in its wake—the USIA—was the result of bureaucratic reshuffling and unfulfilled promises that resulted in an organization with fewer authorities and less integration than what it replaced. The Rockefeller Committee on Government Organization urged consolidation based on what IIA already was; the Jackson committee largely restated IIA's current structure and focus to push out ownership of local programs to the field and recommending elevating IIA within the State Department; the Advisory Commission on Information reversed its support for keeping the broad programs within the State Department and instead recommended a Cabinet-level agency largely based on inaction by both the White House and Congress in addressing leadership issues.

The unkept promise underpinning the USIA model was the intent to forge “a closer link between operations and strategy planning” with a cabinet-level position. In actual execution, USIA fell out of step with the original proposals with a portfolio smaller than IIA's, a smaller toolbox, and no longer having a seat at the tables of policy planning, execution, or coordination. Whereas IIA's role was integrated with the State Department, the proposed leadership role for USIA teed up a conflict with the department that was never resolved and later produced the fuzzy term “public diplomacy” in an attempt to elevate and distinguish the mission of a struggling USIA from the State Department's responsibility for diplomacy. The reality was that USIA never gained a cabinet seat, and it did not have institutionalized reach across foreign policy making and execution at the State Department nor among its interagency partners. The USIA never owned, managed, or directed the breadth and depth of programs or had control in the field abroad that IIA had. The result was the formalized segregation of information from policy.

The U.S. could choose to establish an independent cabinet-level agency with the same vision and mission as the International Information Administration.

Based on this history, we might offer two possible solutions. First, the United States could choose to fix some of the cultural and bureaucratic problems in the State Department and resurrect an organization similar to the former IIA headed by a renamed Under Secretary for Public Diplomacy and Public Affairs. As a second alternative, the U.S. could choose to establish an independent cabinet-level agency with the same vision and mission.

The same core ideas that brought the IIA into being might serve as inspiration for this new organization or agency, structured to coordinate the U.S. government's information efforts. This organization or agency could have a clearly defined mission of conducting and integrating informational activities supporting foreign policy—including perhaps identifying, anticipating, and responding to foreign malign influence, disinformation, and gaps in the availability of information. The new organization or agency might also be the operational and organizational home for information capabilities not well integrated elsewhere, for instance, such as the functions of the office of the Under Secretary for Public Diplomacy, the Global Engagement Center, the Bureau of Educational and Cultural Affairs, the Bureau of Democracy, Human Rights, and Labor, and have direct access to the State Department's public affairs staff on the ground as both USIA and IIA did.

The United States stands to learn from the failures of the USIA—which was ultimately an agency born out of trying to work around, rather than through, how it conducts foreign affairs. To be successful, a new organization or agency would have the backing of a supportive White House and engaged Secretary of State, which would grant it the necessary authority to conduct activities, coordinate across government agencies, and foster private initiatives big and small, just as IIA did during its short life.

Christopher Paul is a senior social scientist at the nonprofit, nonpartisan RAND Corporation. Matt Armstrong is a former Governor on the Broadcasting Board of Governors, now the US Agency for Global Media, and is pursuing a PhD on political warfare at King's College London (and was recently sanctioned by Russia). Both have studied public diplomacy, strategic communication, information operations, and other terms for topics related to leveraging information power as part of foreign policy for almost 20 years. The views expressed here are their own.

This commentary originally appeared on 1945 on July 6, 2022. Commentary gives RAND researchers a platform to convey insights based on their professional expertise and often on their peer-reviewed research and analysis.