The Mutual Rewards of Hiring a Veteran: Q&A with Kyleanne Hunter and Kayla Williams 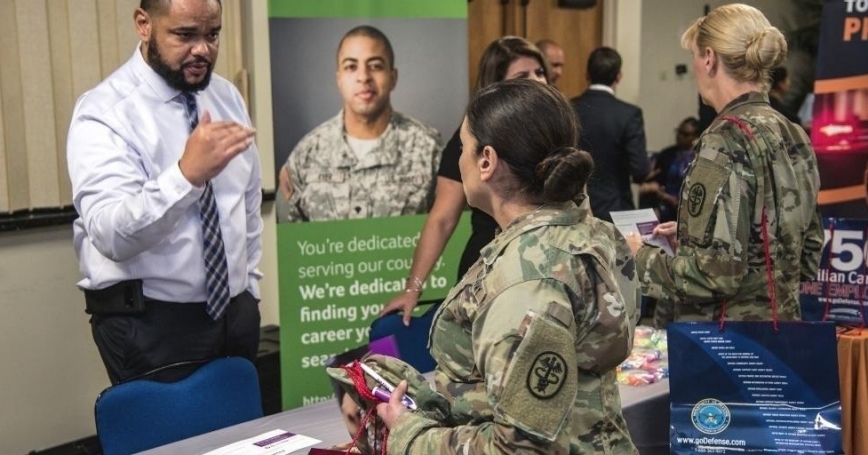 Around 200,000 service members retire or separate from the U.S. military each year, and they are often still in their prime working years. July 25 is National Hire a Veteran Day, and its purpose is to encourage employers to look to this diverse pool of workers to fill open positions. Employers stand to benefit from the experience and skills that veterans acquire during military service. For veterans, a fulfilling career can ease the transition to civilian life and improve well-being over the long term.

Kyleanne Hunter and Kayla Williams are two recent hires, joining the many veterans who work at the nonprofit, nonpartisan RAND Corporation. Both conduct research through the RAND Epstein Family Veterans Policy Research Institute to improve support and resources for veterans.

Hunter is a senior political scientist who came to RAND from the United States Air Force Academy, where she directed the Strategy and Warfare Center. She has served on the Independent Review Commission on Military Sexual Assault and on the Employment and Integration Subcommittee of the Defense Advisory Committee on Women in the Services. She is a U.S. Marine Corps combat veteran with several deployments to Iraq and Afghanistan as an AH-1W Super Cobra attack pilot.

Williams is a senior policy researcher who returned to RAND after leadership roles at the U.S. Department of Veterans Affairs, most recently as Assistant Secretary of Public and Intergovernmental Affairs. She has served on the Department of Labor Advisory Committee on Veterans' Employment, Training, and Employer Outreach and the VA Advisory Committee on Women Veterans. She was an enlisted Arabic linguist in the U.S. Army and has written two memoirs about her experiences during and after deploying to Iraq.

What kinds of projects are you working on? Does your military experience inform your research and help you communicate with decisionmakers?

Kyleanne Hunter: I am working on projects on military sexual harassment and assault and on military and veteran suicide prevention. My background helps me ensure that service members relate to interview and survey questions and that findings and recommendations are worded in ways that senior leaders will respond to. I am also working on projects that challenge my knowledge base. The flexibility I learned in the Marine Corps helps me adapt to new challenges and take on leadership roles on research teams.

My experience as an enlisted soldier allows me to bring a valuable perspective that is often underrepresented.

Kayla Williams: Over my time at RAND, I began focusing my research on the challenges that service members and veterans face. Given that approximately 80 percent of the force is enlisted, my experience as an enlisted soldier allows me to bring a valuable perspective that is often underrepresented, and being a woman veteran has helped me gain the trust of those who have often felt that their voice is not heard.

Hunter: When they transition out of the military, women often go from being the “most visible” service members to “invisible” veterans. People still commonly equate veteran status with men, leaving women to continually explain or prove themselves to access benefits they've earned. Continued visibility of veteran women—in the workplace and elsewhere in civilian life—is important in breaking these stereotypes.

Williams: They certainly have challenges in common with veteran men and with nonveteran women. Veterans and veteran women are thriving overall, but I'd love to see a greater focus on addressing challenges that are shared by working people with families, like unaffordable child care and housing.

Retaining employees is a challenge in many sectors right now. What could employers do to improve retention among veterans, specifically?

Veterans tend to punch above their weight… Employers could benefit by making sure veterans' work is both meaningful and challenging.

Hunter: Veterans tend to punch above their weight. As service members, we are put in leadership positions and have to make tough decisions at an early point in our careers. Employers could benefit by making sure veterans' work is both meaningful and challenging. Beyond that, providing schedule flexibility so that veterans can participate in VA programs and other activities could help them feel supported in the workplace.

Williams: Retention-related problems can arise before a veteran even gets hired. Employment assistance programs sometimes force veterans into an onboarding track based on whether they were officers or enlisted. This division reflects antiquated thinking. Both groups often enter the civilian workforce with similar skills and education.

What advice would you give to new veterans and to those who are about to leave military service?

Hunter: The civilian world is very different! First, you get to choose where you want to work and live. It can be both exciting and unnerving. Also, in the civilian world, career progression is much less transparent and linear; don't be afraid to seek out mentors. There are services that help you tailor your resume and translate your military experience. If you are going to school, student veterans' offices are fantastic resources. Starting a civilian job is a time to reflect on how you want your service to impact your life. There are so many ways that military service is applicable to civilian work—and you get to craft that story now.

Williams: The “acculturation” process is extremely formalized in military basic training. Veterans should bring some humility and openness when they transition to a civilian workplace. For example, I found it challenging to adapt to RAND's relatively flat hierarchy when I first started, but eventually the benefits of that structure became clear. There are also so many resources out there to help veterans pivot to civilian careers in all types of industries, including entrepreneurship. Research these options, and you might find that your military experience translates in unexpected ways.