The Indo-Pacific Mostly Backs 'One China,' but Taiwan Gets Some Love, Too 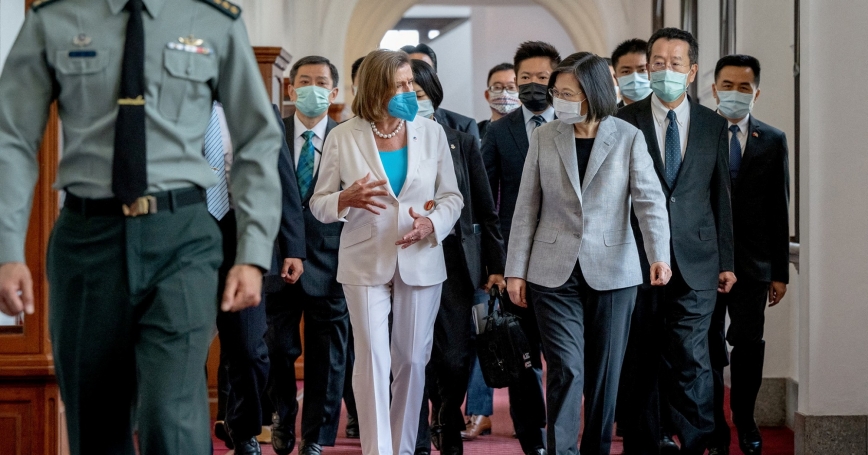 U.S. House Speaker Nancy Pelosi's visit to Taiwan this month prompted China to conduct unprecedented military drills that included surrounding the island on all sides, firing missiles over it, and taking other highly aggressive steps. Heightened tensions in the Taiwan Strait also elicited responses from other nations in the Indo-Pacific that predictably and overwhelmingly upheld Beijing's “One China” principle—that Taiwan is part of mainland China. Pelosi's trip made it equally clear, however, that key U.S. allies strongly support Taiwan's cause as well, particularly in the face of a potential war over the island, suggesting that Beijing's assertive behavior is steadily alienating nations that otherwise may have minded their own business.

At the very forefront of support for Taiwan are Japan and Australia. Along with the United States, they issued a joint statement on the sidelines of the Association of Southeast Asian Nations (ASEAN) Foreign Ministers' Meeting, expressing their “concern about [China's] recent actions that gravely affect international peace and stability” and urging Beijing “to immediately cease the military exercises.” Their statement also noted “there is no change in the respective [O]ne China policies” of Australia, Japan, and the United States, though this was clearly not the focus.

Another important U.S. ally, South Korea, played its cards very differently. Pelosi's next stop after Taipei was to Seoul, where South Korean President Yoon Suk-yeol claimed to be on a staycation and opted for a phone call with her instead—which some interpreted as a snub. There was no official South Korean statement on Taiwan. When asked to comment, a South Korean official from the president's office urged “close communication with relevant parties” without mentioning China or Taiwan—essentially a non-statement that favors Beijing because it refrains from supporting Taipei.

Likewise, South Korean Foreign Minister Park Jin stuck to anodyne talking points, noting that “intensifying geopolitical conflict in the Taiwan Strait could hamper political and economic stability in the region” and have a “negative ripple effect on the Korean Peninsula.” The week after Pelosi's visit to Taiwan and South Korea, Park visited China for the first time, suggesting that Seoul did not want to rock the boat with Beijing just before this crucial engagement.

Beijing's assertive behavior is steadily alienating nations that otherwise may have minded their own business.

Because the Pelosi visit to Taiwan occurred during the ASEAN Foreign Ministers' Meeting in Cambodia, the group was able to quickly release a statement (PDF) to “reiterate ASEAN Member States' support for their respective One-China Policy.” Taiwan went entirely unmentioned.

Many ASEAN members also released individual statements, none of which supported Taiwan's plight. For example, Indonesia called on all parties “to refrain from provocative actions,” adding that it continued to “respect the One China policy.” Singapore hoped “the United States and China can work out a modus vivendi, exercise self-restraint and refrain from actions that will further escalate tensions.” Vietnam, a fast-emerging key regional partner of the United States, hewed closely to its past statements, noting, “Vietnam persists in implementing the 'One China' principle and hopes relevant parties exercise restraint, refrain from escalating the situation in the Taiwan Strait, and actively contribute to the maintenance of peace and stability.” Malaysia and Thailand made similar statements that refrained from supporting Taiwan.

One clear exception to Southeast Asian hedging was the response of the Philippines, a U.S. treaty ally in open conflict with China over the latter's maritime claims. When U.S. Secretary of State Antony Blinken visited Manila in early August following the ASEAN meeting, he met with the new president, Ferdinand Marcos Jr., who remarked that the Taiwan crisis “just points to the fact of the importance of the relationship between the United States and the Philippines. I hope that we will continue to evolve that relationship in the face of all the changes we have been seeing.”

India, meanwhile, has proven to be a very intriguing case. Indian External Affairs Minister S. Jaishankar said New Delhi will “assess and monitor” the situation for potential impacts on India. But New Delhi has refused to utter the phrase “One China” and instead only stated that “India's relevant policies are well known and consistent. They do not require reiteration.” New Delhi's verbal dodginess is probably because India has its own beef with China along their disputed land border—known as the Line of Actual Control—which in May 2020 saw some of the deadliest clashes in decades. Moreover, in recent years, India's unofficial relationship with Taiwan has grown, particularly on the economic front, suggesting that New Delhi is seeking to play hardball with Beijing. However, and significantly, India also chose not to sign the Australia-Japan-U.S. trilateral statement, even though the four nations are joined in the Quadrilateral Security Dialogue, whose unofficial aim is to counter China. It would appear New Delhi still wants to preserve some goodwill with Beijing.

Across the rest of South Asia, there was no sign of support for Taiwan, only China. Beijing's “iron brother” Pakistan, for example, spouted Chinese talking points on the importance of “non-interference in internal affairs” of sovereign nations—well-worn code for letting China decide on its plans for Taiwan. Bangladesh, Maldives, Nepal, and Sri Lanka similarly upheld Beijing's rights in the crisis.

Out in the Pacific Islands, an eerie silence has reigned. At least one exception to the rule is Vanuatu, which noted that “Vanuatu reiterates Taiwan is an inalienable part of China's territory.” Perhaps worryingly, only one of Taiwan's four remaining diplomatic partners in the region—the Marshall Islands, Nauru, Palau, and Tuvalu—has expressed its support for Taipei so far. The Marshall Islands said it remains “a true friend and ally” of Taiwan, and it condemned “recent military actions in the Taiwan Strait” without specifically naming China. Taiwanese Foreign Minister Joseph Wu, however, claimed that all of Taiwan's 14 remaining diplomatic partnerships, four of which are in the Pacific, are sticking with Taiwan over China. Taiwan lost two Pacific Island states—the Solomon Islands and Kiribati—to China in 2019 alone, making further diplomatic shifts a real concern.

New Zealand, a close partner of the United States in the Pacific that has, at times, been viewed as being soft on China, also weighed in—though ambiguously at best. When Foreign Minister Nanaia Mahuta met with Chinese Foreign Minister Wang Yi on the sidelines of the ASEAN meeting, she emphasized “the importance of de-escalation, diplomacy, and dialogue” but without reiterating “One China” or support for Taiwan. A few days earlier, before the crisis, New Zealand's prime minister, Jacinda Ardern, gave a speech on China, in which she said cooperation would continue even with a “more-assertive” Beijing. Her future travel plans to China may be playing a role in Wellington's forgiving message.

Finally, there are several Indo-Pacific nations that have offered either no statement or doubled-down on their support of Beijing. Mongolia has yet to address heightened U.S.-China tensions over Taiwan, though Beijing claims that its northern neighbor re-endorsed “One China.” Unsurprisingly, North Korea and the ruling military junta in Myanmar—both stalwart Chinese allies—staunchly expressed their backing of China and blamed the United States for stirring up trouble in the region.

There are several countries that have become increasingly concerned over Beijing's behavior and are thus directly or indirectly backing Taiwan.

Although China is finding most of the Indo-Pacific supportive of its cause, there are several countries—certainly Australia and Japan and perhaps to a lesser extent India—that have become increasingly concerned over Beijing's behavior and are thus directly or indirectly backing Taiwan. Normally, Beijing could simply write this group off as a few objectors in a sea of loyalty. But the problem is that these three nations, along with the United States, make up not only the Quadrilateral Security Dialogue but also the key powers in the region besides China itself. They can hardly be ignored, and Beijing might want to consider tweaking its strategy going forward. If anything, Beijing would want to avoid the establishment of an overt democratic coalition to support Taiwan. Rather, getting one or multiple of these powerful countries to dilute their support to Taiwan would be a major victory and a sign that Chinese ambitions for what it calls reunification cannot be denied. Fortunately, opposition among them persists and is only growing louder.

This commentary originally appeared on Foreign Policy on August 22, 2022. Commentary gives RAND researchers a platform to convey insights based on their professional expertise and often on their peer-reviewed research and analysis.