Got a Labor Shortage? Make It Easier to Work 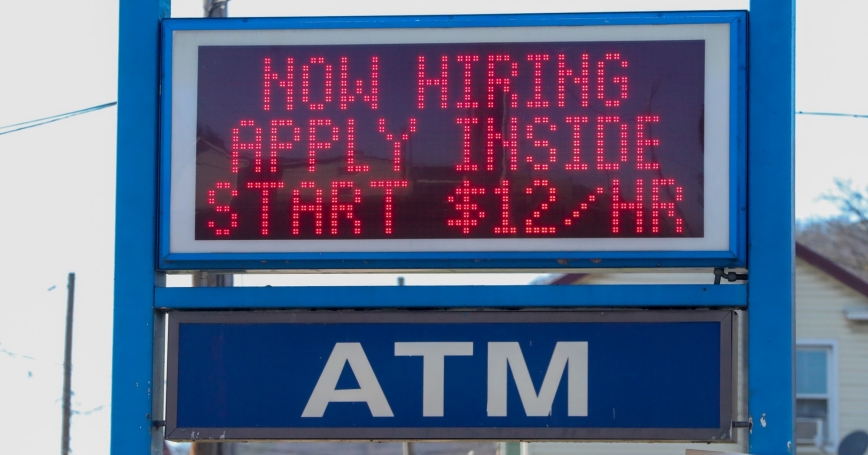 A sign advertising for workers outside of a gas station in Danville, Pennsylvania, March 29, 2022

Federal Reserve Chair Jerome Powell insists that the tight U.S. labor market isn't primarily to blame for today's high inflation, pointing instead to other culprits such as commodity prices, supply chain problems, and the war in Ukraine. Rather than a weakness, he argues, the demand for scarce workers is instead a sign that a recession is still not upon us. Right as he might be on both accounts, a persistent worker shortage could still be a very big problem in the longer run.

For a full two years before the pandemic hit, and for the past 11 months, job openings have exceeded the number of people looking for work—a phenomenon not seen in data going back to 2000. In the short term, this can be healthy, providing a rare and much-needed boost to wages and coaxing people such as the long-term unemployed back into the labor market. By reviving the supply of workers, the excess demand can ultimately satisfy itself.

This time around, however, the healthy scenario isn't quite playing out. Wages are rising, but not enough people are rejoining the workforce. As of June, the adult labor force participation rate stood at about 62 percent, down from 67 percent in 2000 and equivalent to the level of the mid-1970s. This raises the question of whether the United States faces a long-term dearth of workers, which if true could undermine the country's productive potential.

The labor force struggles with self-inflicted structural weaknesses. Many people face barriers to employment that they can't remove on their own.

The United States prides itself on its work ethic, a cultural zeal reflected in social policies such as employment requirements for food stamps and tax bonuses for working single mothers. Last year, Congress ended the expanded child tax credit—which lifted an estimated 3.7 million children out of poverty—out of the concern that it might lead a small fraction of parents to work less. So why aren't more people working?

A key headwind is demographics: Baby boomers are aging out of the workforce, and will keep doing so at least until the last of them turn 65 in 2029. A lopsided generational composition of the labor force is beyond policy influence; even if some boomers delay retirement, that won't halt the overall slide.

But the labor force also struggles with self-inflicted structural weaknesses. Many people face barriers to employment that they can't remove on their own.

Women, for example, could participate more if the United States adopted policies—such as paid family leave, free childcare, and the right to work part time—that most industrialized nations did a quarter-century ago. Black men face well-documented obstacles, such as hiring discrimination, disproportionate disciplining in school, and disproportionate (PDF) incarceration. Disabled individuals often need employers to provide the reasonable accommodations that the Americans with Disabilities Act requires.

And let's not forget immigrants. There are nearly 45 million in the United States, comprising 17 percent of the labor force. Yet in the 36 years since Congress adopted the Immigration Reform and Control Act of 1986, legislators have failed to address barriers faced by would-be immigrants who want to work, visa rules that limit current immigrants' ability to work, and the legal limbo of large groups such as those in the Deferred Action for Childhood Arrivals program.

It's easy to blame the pandemic for today's worker shortage, but it can't explain long-term participation issues.

It's easy to blame the pandemic for today's worker shortage, but it can't explain long-term participation issues. The headwinds of evolving demographics can explain it, but don't offer a tenable solution.

If the United States wants to avoid a long-term worker shortage, it should look to what policy can but has failed to fully address. We have a long history using carrots and sticks, but this is a problem we may not be able to cajole or punish our way out of. Finding workers can be as simple as giving more people a chance to work.

This commentary originally appeared on Bloomberg on August 2, 2022. Commentary gives RAND researchers a platform to convey insights based on their professional expertise and often on their peer-reviewed research and analysis.