Reduce Friction in Space by Amending the 1967 Outer Space Treaty 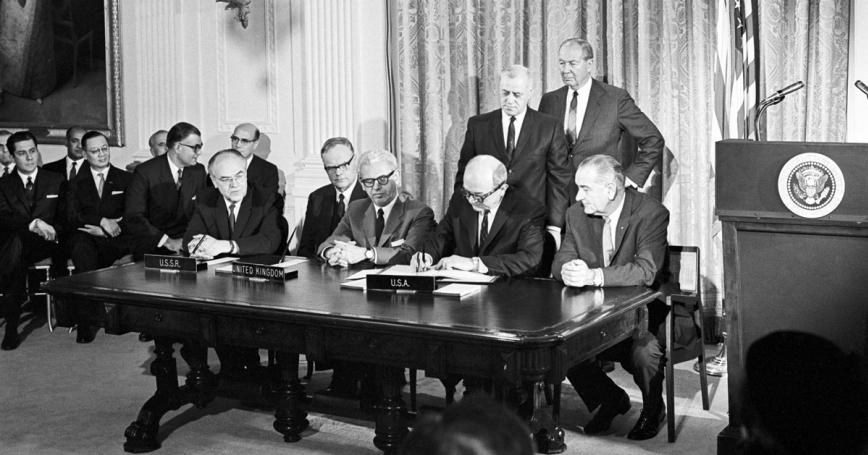 Signing of Treaty on Outer Space in May 1964

Is space becoming the “wild, wild west” that some, including top U.S. national security officials, fear? Or does the fact that we have several international treaties on space provide the necessary rule of law framework to maintain peace in space? The answer likely lies somewhere in the middle. If so, the international community might consider updating the existing space legal regime to ensure it meets current political, economic, social, and technical challenges.

Of significant concern is the fact that the increasing great-power competition between the United States, the People's Republic of China, and the Russian Federation is making space more dangerous. This danger is exacerbated by the lack of binding international rules, governance regimes, and institutions that would induce or compel coordination and collaboration between allies and adversaries alike, and constrain the aberrant behavior of malicious or negligent actors through the imposition of both soft and hard enforcement mechanisms. This article posits that our existing means of space governance—a framework reliant on treaties from the 1960s and 1970s, nonbinding voluntary guidelines, and underdeveloped norms of behavior—is failing. It further posits that international consensus decisionmaking, and the institutions that support such decisionmaking (e.g., the United Nations and its Committee on the Peaceful Uses of Outer Space), may well offer some of the best and most immediate solutions to preserving a peaceful and sustainable space. In particular, and despite the significant political and diplomatic challenges, amending and updating the 1967 Outer Space Treaty to establish more detailed binding rules could be a crucial and productive first step. This could be in addition to the current U.N. open-ended working group on space threats, as well as the current efforts to develop norms of behavior for space.…

Douglas Ligor is a senior behavioral/social scientist at the nonprofit, nonpartisan RAND Corporation, and a member of RAND's Space Enterprise Initiative. Formerly, he was an attorney for the Departments of Commerce, Justice, and Homeland Security. This article is a product of a 2022 workshop on “Challenges and Opportunities at the Dawn of the New Space Age,” hosted by the University of Pennsylvania's Perry World House.

This commentary originally appeared on War on the Rocks on August 26, 2022. Commentary gives RAND researchers a platform to convey insights based on their professional expertise and often on their peer-reviewed research and analysis.