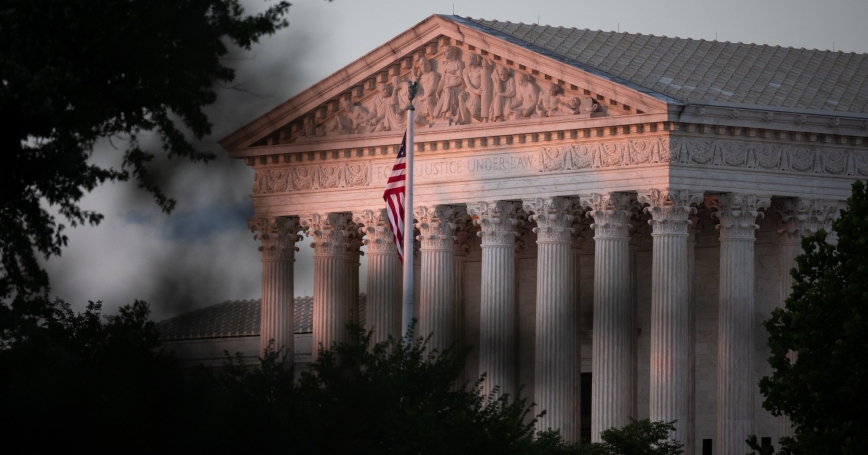 And yet, as states are already proving, the truth is likely to be more complicated. Rather than an abrupt change to American gun laws, the Bruen opinion may accelerate existing political and legal trends, driving state laws toward more-permissive and more-restrictive gun regulations.

Red-state legislatures will likely continue their efforts to make it easier to own and carry guns—citing Bruen as a reason to relax their gun laws, repeal existing laws, or vote against gun regulation. Blue states, by contrast, will likely continue to expand restrictions, citing passages in Bruen that bless gun licensing, the designation of sensitive places unsuitable for the presence of firearms, the prohibition of dangerous and unusual weapons, and the restriction of gun ownership to those who are “law abiding, responsible citizens.”

Rather than an abrupt change to American gun laws, the Bruen opinion may accelerate existing political and legal trends, driving state laws toward more-permissive and more-restrictive gun regulations.

The Bruen decision, then, may not actually narrow the policy gap between states sharply divided over their approach to regulating guns. Rather, its result may not look very different than what we have today—a patchwork of laws that often reflect political and policy demands of individual states. That is, until the court accepts new cases and clarifies some of the significant ambiguities that Bruen has left lower courts to sort out.

Bruen concerned New York's “may issue” concealed carry law, which required that a person seeking a license to carry a concealed weapon show “proper cause” to obtain a license. “Proper cause,” under New York law, was defined as a special need, separate from a generalized need for self-defense, which is shared by everyone. In its ruling, the court indicated that gun regulations must be analyzed to see if they comport with traditional American practices of gun ownership and regulation. If not, they must be struck down.

All of this would seem to open the floodgates for guns. And yet, in concurring opinions by Justices Samuel Alito, Brett Kavanaugh, and Chief Justice John Roberts—whose three votes were essential for the six-justice majority ruling—the court indicated that licensing laws for concealed carry that use more-objective metrics than “proper cause” are presumptively constitutional. Gun ownership may be, in the court's view, a fundamental and historical American right, but so is the regulation and licensing around gun ownership and public carrying. States with so-called “shall-issue” laws—with less-subjective and discretionary considerations about who may own and carry a firearm—would seem to comply with the Second Amendment after Bruen.

The presumptive constitutionality of these “shall issue” jurisdictions should provide ample room for states to ensure that firearms are not carried by the violent and the reckless—the people the now unconstitutional “may issue” laws were meant to screen out.

For example, some “suitability” permitting standards that deny licenses to persons who are a potential hazard to themselves and others seem to still be on the table. Some states, like Connecticut, deny permits to persons “whose conduct has shown them to be lacking the essential character o[r] temperament necessary to be entrusted with a weapon.” Others, like Colorado and Oregon, enforce standards that prohibit the carrying of firearms to those with documented histories of drinking or drug problems, violence, or emotional instability. Still other states, like Delaware (PDF) (a state with a “may issue” law that the court considered constitutional), require that an applicant submit five character references from “respectable citizens” of the county, and have notice of the application published in a newspaper of general circulation.

Such “good moral character” standards may allow license issuing authorities to consider applicants' public statements, such as their social media posts, in making licensing determinations (although, depending on their breadth, this may raise some First Amendment issues).

Indeed, both California (PDF) and New York have already included such “social media checks” in their application processes. By allowing states to determine suitability conditions for licenses to carry or even possess a firearm, Bruen may invite states interested in keeping guns out of the hands of high-risk citizens to develop more targeted, effective, and consistent licensing rules than the “may issue” laws they replace.

Training standards provide another mechanism for ensuring safe gun carrying. Some of the presumptively constitutional “shall issue” states, like Florida and Michigan, require minimum levels of training, including live fire. Similar tests could be used in other states. Such regulations could be defended under Bruen by noting their historical analogues in the training standards required of militias in the early days of the republic.

Civilian training requirements could also include de-escalation and implicit bias training to reduce the erroneous use of deadly force against racial minorities, which is a common occurrence (PDF) among the police. And suitability requirements could be graduated, much like driver licenses, to reflect the dangerousness of the weapon to be carried or the places a gun is allowed to be carried.

Tennessee, for instance, has a graduated licensing system that allows those who receive more training and who meet other criteria to obtain enhanced permits allowing them to carry concealed weapons in more places than those who obtain standard permits.

Finally, the court's opinion was quite vague on what places states can legitimately describe as “sensitive,” where guns could be prohibited. Instead, the court again looked back in time, suggesting that historical analogues should guide these decisions. Yet, if history is to guide us, early America was filled with examples of gun carriage restrictions, going back to the early common law. Restrictions of guns at fairs, markets, polling places, places of public assembly, and public education are well documented in the historical record. States will almost certainly expand the list to cover places where modern educational, civic, and political activity occurs.

Restrictions of guns at fairs, markets, polling places, places of public assembly, and public education are well documented in the historical record.

That said, red-state legislatures are likely to see Bruen less as an invitation to regulate than as permission to further deregulate guns and gun ownership. Bruen's defense of public carry will be cited by gun rights advocates as a justification to repeal or relax what limited licensing remains in those states in favor of so-called “constitutional carry.” The court's “history and analogy” approach to constitutionality will potentially be used by red-state legislatures to sift through their existing laws and purge all those that have no clear legislative equivalent in the founding era.

Almost certainly, some legislators will use the Bruen ruling as reason to vote down any kind of modern regulation—such as emergency risk protection orders (“red flag laws”)—they deem as limiting gun rights. Bruen doesn't command this result; but it offers a legal justification for such policy choices.

The result of this, in all likelihood, is that, unless the court clarifies its Bruen holding, we'll see for the foreseeable future what we've seen for the last decade: Blue states regulating within the ambiguities and interstices of the Supreme Court's decisions on guns; red states articulating their political and policy preferences as a matter of constitutional right and requirement.

Thus, we'll see a continuing separation between blue states and red states (blue urban areas and red rural areas)—about how, state by state, region by region, we understand our fundamental, constitutional framework surrounding the right to keep and bear arms.

Andrew Morral is a senior scientist at the nonprofit, nonpartisan RAND Corporation and director of its Gun Policy in America initiative. Rosanna Smart is an economist at RAND. Darrell Miller is the Melvin G. Shimm Professor of Law at Duke University.

This commentary originally appeared on The Hill on August 20, 2022. Commentary gives RAND researchers a platform to convey insights based on their professional expertise and often on their peer-reviewed research and analysis.