Can South Korea Help the World Beat the Next Pandemic? 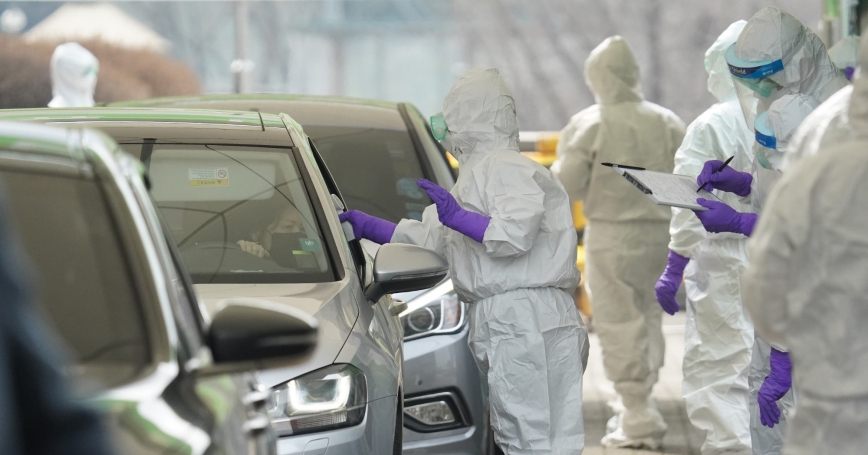 Medical staff conducting COVID-19 tests for drivers in their vehicles at a clinic in Gwangju, near Seoul, South Korea, March 2, 2020

From March 2020 to October 2021, COVID-19 accounted for one in eight deaths in the United States, killed more people than stroke and accidents combined, and was a top five cause of death in every age group 15 years and up. Meanwhile, everyday Americans are confronted with news about outbreaks of viruses old (e.g. Monkeypox, Polio) and new (e.g. Longya). Clearly, the country's pandemics responses could be improved.

As the United States considers ways to respond to future health emergencies, consideration of South Korea's experience could prove useful. COVID-19 hit the country early and hard. In February 2020, South Korea had the highest number of COVID-19 cases outside China. The World Health Organization (WHO) had yet to announce a pandemic, global public health experts were debating whether people without severe symptoms could transmit the disease, vaccines were still a concept on paper, and a severe shortage of basic testing kits and personal protective equipment plagued even the most technologically advanced countries.

Nations around the world could look to South Korea's near-perfect response as a model for dealing with future public health crises.

Despite an initial high burden of disease at this early stage of the pandemic due to its proximity and high trade and tourist volume with China, South Korea was able to maintain a low case-fatality rate of 1.2 percent during the first outbreak, compared with 9.3 percent in Italy, 7.8 percent in Iran, 4.3 percent in France, and 9.2 percent in New York City in the first outbreak. More significantly, the ROK flattened the curve without a large-scale and strict lockdown, which could have led to economic paralysis or social despair. In 2020, the nation's gross domestic product contracted by only 1 percent, compared with 5.3 percent in Japan, 3.7 percent in the United States, and 11.2 percent in the United Kingdom.

How did South Korea do it? A new RAND report on public health and soft power summarizes six features of South Korea's COVID-19 responses, including the development of an early alert system and a centralized pandemic response system, the use of information sharing and communications technology, the creation of a public-private partnership in biomedical products production, and the existence of a large public health workforce for case tracing and isolation and a multiple-track hospital triage system.

For example, the government initiated the first national infectious disease alert on Jan. 3, 2020, 10 days before the novel virus was identified, 20 days before China's national alert, and months before WHO declared COVID-19 a pandemic on March 11. As one South Korean scholar noted: “The early initiation of the infectious disease alert system gave the government a few precious weeks to establish the national pandemic command center and release emergency funding to build testing and contact tracing capacity before the first outbreak hit.”

The report also summarizes experts' consensus on foundations that supported South Korea's success. One of them was an outcome of the relatively recent MERS pandemic in 2015. At that time, in response to the MERS pandemic, the government overhauled its public health agencies and updated its infectious disease law to maintain funding for the public health workforce and budget. It also passed a law to allow the government to use private credit card data for contact tracing during a pandemic. Most importantly, the South Korean government built these foundations in a democratic system where citizens shared the responsibility to reshape the pandemic strategies through voting.

South Korea's successful response to COVID-19 may provide a level of hope amid the persistent bad news involving viruses globally and in the United States.

Will countries learn from South Korea's model? South Korea is probably better known for its K-Pop, TV shows, and technology than its public health capabilities, so translating its COVID-19 success into soft power gains could be a challenge. For years it has lagged behind its neighbors, such as Japan and China, in building diplomacy through health-assistance programs.

The report found South Korea's soft power assets from the COVID-19 response span multiple domains, including digital resources and technological advancement; private enterprise resources; education, and labor market resources; cultural resources; engagement activities; and government capacity. If it is to leverage these assets, though, South Korea may need to consider developing a proactive strategy to address areas of potential limitations and risks. These may include cultural and language barriers, suspicion of political and economic motivation, and questions about the assistance's sustainability.

South Korea's successful response to COVID-19 may provide a level of hope amid the persistent bad news involving viruses globally and in the United States.

Jennifer Bouey is Tang Chair for China Policy Studies, a senior policy researcher, and an epidemiologist at the nonprofit, nonpartisan RAND Corporation.