Is Our Response to the Pandemic a Preview of How We May Deal with Climate Change? 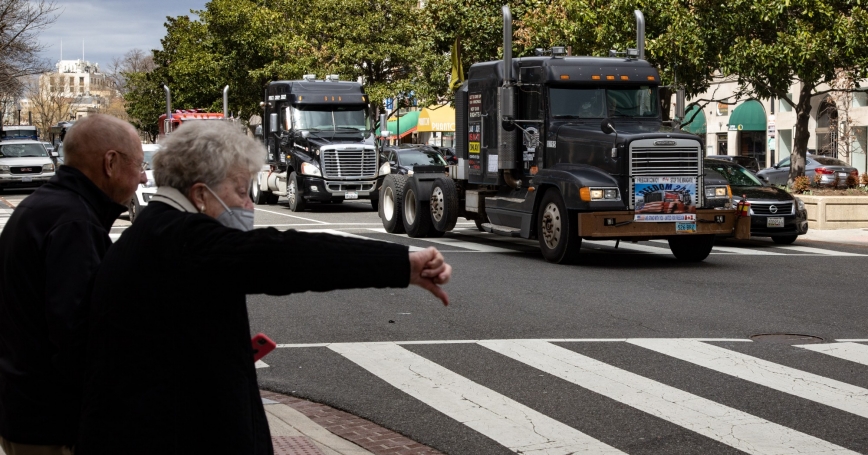 A convoy of trucks and people protesting against COVID-19 mandates drives through Washington, D.C. as people walking on the sidewalk react, March 20, 2022

The COVID-19 pandemic did not see bodies pile high or mass graves. The numbers being reported in the press are just that—abstract numbers. In the absence of visible evidence of imminent doom, the risk to human life can be weighed against the risk to economic well-being, individual freedom, or potential social disorder—and people come to different conclusions. Some have gone so far as to claim that the COVID-19 pandemic is a hoax conjured by government authorities to impose tyrannical controls over the population.

Pandemics test the ability of societies to act collectively, either within nations or internationally. To do so effectively requires social capital—the notion of a community sharing values, norms, trust in institutions and each other, and a sense of shared purpose that is not imposed but freely agreed upon. It does not mean the absence of difference or debate but rather relationships that are marked by mutual respect and goodwill. That would hardly describe contemporary America—or indeed many countries today. Even countries many would consider as rating high on a “social capital” index, have experienced violence in response to COVID-19 restrictions and requirements.

Climate change is already a contentious issue, with some claiming that global warming is a hoax being promoted for political or financial reasons. They see proposed guidelines aimed at reducing the use of fossil fuels, encouraging the use of electric vehicles, or potential changes in diet as further examples of imminent tyranny. The arguments apparent in the response to COVID-19 will be replayed.

Climate change is already a contentious issue, with some claiming that global warming is a hoax being promoted for political or financial reasons.

Public hostility toward scientific authority and government-imposed measures to slow the spread of the virus were evident in attitudes toward Dr. Anthony Fauci, the director of the National Institute of Allergy and Infectious Diseases and the Chief Medical Adviser to the President. Never had a single individual seemed to have the power to affect the personal behavior of so many people.

While his plain speech helped to persuade millions of Americans to go along with onerous rules to “flatten the curve” so that hospitals would not be overwhelmed with coronavirus patients, and to get the shot when a vaccine became available, an increasingly ill-tempered audience saw him as a symbol of government oppression. Many despised him as a dangerous man. Some threatened his life.

In America's deeply divided society, attitudes toward masks have, like everything else, reflected political views and party affiliations. Mask wearers had greater trust in scientists. Those who resisted mask-wearing trusted leaders who scoffed at the reality of the virus or downplayed its seriousness and disparaged health officials for overreacting.

Resistance to mask and vaccination mandates during the COVID-19 pandemic has provided a forum for mobilization and is also creating new political partnerships and new models for mass resistance—armed protests and takeovers at state capitals, assaults on vaccination centers, truckers' convoys.

Far-right groups portrayed the mandates as another example of government tyranny, anti-vaxxers as an assault on bodily autonomy. Requirements to carry proof of vaccination to travel, enter certain premises, or work in certain professions prompted widespread protests. To those who already felt disparaged and besieged, vaccine passports raised the specter of yet another form of second-class status. Opponents quickly compared it to the phrase uttered by sneering, jackbooted officers in a hundred Hollywood films: “Your papers, please.”

An overlap between right wingers and anti-vaxxers was evident in the early spring of 2020, when anti-vaxxers appeared in front of state capitols at armed protests opposing COVID-19 shutdowns.…

Brian Michael Jenkins is the author of Plagues and Their Aftermath: How Societies Recover From Pandemics. He is a senior adviser to the president of the RAND Corporation. He served in the U.S. Army's Special Forces in during the war in Vietnam, before joining RAND in 1972. In 1996, President Bill Clinton appointed Jenkins to the White House Commission on Aviation Safety and Security. Jenkins has also served as adviser to the National Commission on Terrorism.