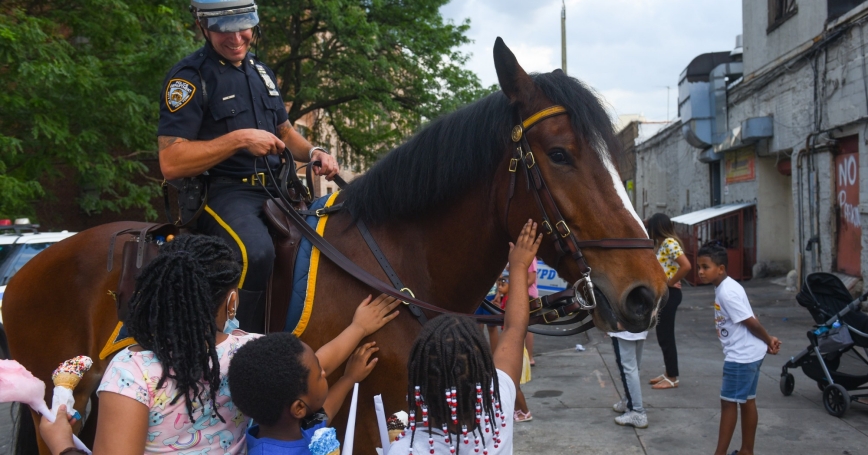 Children pet a police horse during the 46th Precinct’s National Night Out in the Bronx, New York, Tuesday, August 3, 2021

Community policing is often held up as an instrumental part of reforms to make policing less harmful, particularly in low-income communities that have high rates of violence. But building collaborative relationships between communities and police is hard. Writing in Nature, Shah and LaForest[1] describe a large field experiment revealing that giving residents cards and letters with basic information about local police officers can prevent crime. Combining these results with those from Internet-based experiments, the authors attribute the observed reduction in crime to perceived “information symmetry.”

Known strangers are individuals whom we've never met but still know something about, such as celebrities. We tend to assume, erroneously, that known strangers know as much about us as we do about them. This tendency to see information symmetry when there is none is referred to as a social heuristic—a shortcut in our mental processing.

Shah and LaForest used a series of Internet-based conceptual experiments to evaluate how this heuristic manifests in judgments about known strangers. The authors conducted the experiments on a U.S. crowdsourcing platform called Amazon Mechanical Turk. Research participants on this platform are not representative of the U.S. adult population, tending to skew towards white, liberal, and younger people relative to the population in general. Nonetheless, research indicates[2] that there are considerable similarities between treatment effects in experiments run on convenience samples (for example, students or online opt-in sampling) and on representative population-based samples.

We tend to assume, erroneously, that known strangers know as much about us as we do about them.

In each experiment, participants thought they were exchanging basic information with another person (a known stranger), although, in fact, no such person existed—instead, participants received pre-programmed answers to set questions.

Each experiment tested, in a different way, how much the information received by the participant affected their perception of how much the known stranger knew about them. The final two experiments then showed that this perceived information symmetry lessened the likelihood that a participant would be dishonest when they thought the known stranger would be responsible for catching them cheating.

Next, Shah and LaForest applied these findings to a real-world setting—community policing. Collaborating with the New York Police Department, the authors sent letters and cards to residents of 39 public-housing developments, providing information about the developments' local community police officers, called neighborhood coordination officers. These flyers included personal details, such as the officers' favorite food, sports team, or superhero. Thirty control developments had neighborhood coordination officers, but did not receive flyers.

This field experiment provided convincing evidence that a simple intervention can reduce crime. Indeed, in the three months after the intervention, the researchers observed a 5–7 percent drop in crime in the developments that received the information compared with neighborhoods that did not. This level of reduction is similar to that of more-aggressive policing policies[3]. The drop in crime lessened after three months, which the authors suggest is due to the light touch and limited duration of the intervention. Interventions designed to keep officers' information at the top of residents' minds (such as flyers sent over a longer period at a greater frequency) might therefore result in longer-term effects.

The authors attribute the reduction in crime to a heightened perception among residents receiving flyers that the officer would find out if they committed a crime. The possibilities of such findings are potentially exciting, because the work implies that a police officer who is perceived as a real person can prevent crime without tactics such as the New York City police department's “stop, question, and frisk” policy, which tended to create animosity between community members and the police.

The authors rule out several of these possible alternative factors. For instance, they show that the intervention did not affect how people viewed their local officers' familiarity with the area. It also had no effect on residents' trust in the police or perceived levels of police presence. However, other psychological phenomena could still be at play.

Indirect social control—ideally, that created by the community itself—is less costly and intrusive than surveillance or direct control by outside agents.

These include similarity judgments (the fact that knowing more about a stranger can make them feel more similar to you) and psychological closeness (the fact that feelings of similarity can increase emotional connectedness, leading to transformative behavior)[4] [5] [6]. Indeed, these phenomena have previously been used to develop interventions aimed at reducing delinquency[7]. In Shah and LaForest's field experiment, feeling more psychologically close to a known stranger (the police officer) might serve as a deterrent from engaging in negative behavior that would damage one's relationship with the stranger. In that case, the change in behavior would be driven by a greater emotional connection, not by perceived information symmetry. Finally, the intervention could plausibly lead residents to think that police surveillance of their community is greater than it actually is—something not evaluated in this study.

Indirect social control—ideally, that created by the community itself—is less costly and intrusive than surveillance or direct control by outside agents[8]. The current study cannot show us how to deter crime without relying on surveillance by outsiders. But until such policies are developed, Shah and LaForest's work might highlight one valuable way in which police forces could get more bang for their buck when deploying officers in a community.