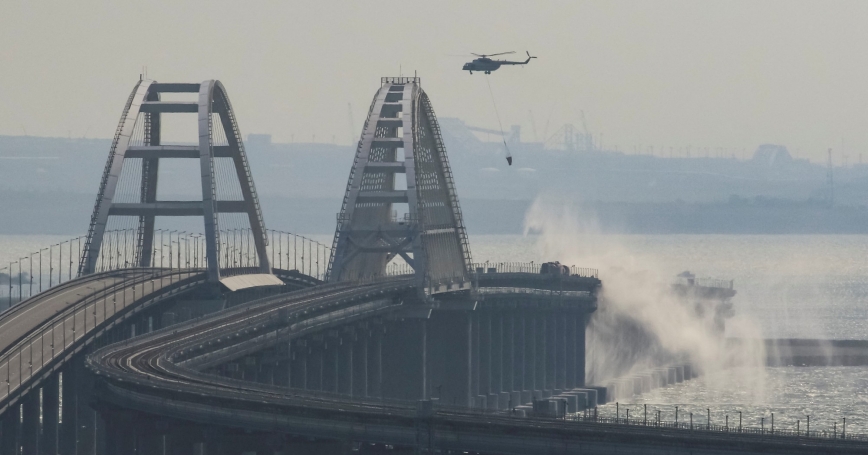 A helicopter drops water to extinguish fuel tanks ablaze on the Kerch bridge in the Kerch Strait, Crimea, October 8, 2022

By damaging the Kerch Strait Bridge between Crimea and Russia, Ukraine has not only attenuated the flow of Russian logistics, but also achieved a great symbolic victory. The longest bridge in Europe was Putin's pet project, and a tangible symbol of his desire to permanently bind Crimea to its new Russian overlords. Ukrainians swiftly mocked the despoilers of their country, having put on a dramatic “fireworks show” that damaged a large swath of the bridge for Putin's 70th birthday. Despite Russian attempts to remediate the bridge, which have restored some movement, its reduced capacity and its increased vulnerability to follow-on attacks demonstrate the effectiveness of Ukrainian attacks well behind Russian lines.

The cause of the initial explosion—which also ignited fuel-filled tanks on a nearby train—has not been definitively determined. Russian authorities were suspiciously swift to attribute the attack to a truck bomb, and rapidly arrested alleged perpetrators. Ukrainian authorities have not acknowledged responsibility for the attack, much less provided comments on how it was conducted. However, some expert reviews of video and photographic evidence suggest that the initial explosion might have come from below.

One possible cause of the explosion from below is an uncrewed surface vehicle (USV)—a vessel without people. Divers' payloads are inherently limited, so having them plant enough explosives to damage the bridge would have required numerous clandestine trips. Uncrewed undersea vehicles (UUVs) could conceivably have been used, but readily available UUVs have limited payloads and ranges. Moreover, there is evidence that Ukraine is already using explosive-laden USVs: One ran aground in Crimea last month.

Low-visibility explosive USVs, or USVs that appear innocuous until they detonate, could target infrastructure in a wide range of military contexts.

The concept of using explosive USVs as weapons is not new. A RAND report from 2013 described how the U.S. Navy could conduct such attacks, referring to such USVs as “surface torpedoes.” In recent years, Yemen's Houthi rebels have used explosive USVs to attack ships. However, assuming this could have been a USV attack, this might have been the first instance of such an attack against infrastructure. It may not be the last. Low-visibility explosive USVs, or USVs that appear innocuous until they detonate, could target infrastructure in a wide range of military contexts.

Bridges, dams, and other large-scale infrastructure are hard to seriously damage via missile strikes or bombardment from aircraft. Having been designed to withstand a variety of environmental stresses and the rigors of regular usage, these structures are relatively durable. However, a vessel can deliver a large enough quantity of explosives to inflict substantial damage. This principle guided one of the greatest raids of World War II, in which British forces rammed a vessel into a critical facility for ship repair in occupied France, then attempted to flee (with some success) before tons of timer-controlled explosives detonated. They successfully incapacitated the facility until well after the war.

A USV that has been designed for stealth, with only a limited surface profile, may be able to slip through even a well-watched area. Normal vessel traffic can obscure it, and even once it has been detected, the process of identifying it as a threat and authorizing the use of force against it can give it time to strike its target. Swarms of USVs could also be used, with a greater risk of early identification, but also a high probability that at least some of them get through due to saturation of defenses. Software developed by the U.S. Office of Naval Research already enables swarms of USVs to autonomously coordinate their actions.

Alternatively, a cargo vessel could have software installed to enable remotely controlled or autonomous navigation, then have concealed explosives detonate in the vicinity of key infrastructure. Even if anomalous behavior is detected moments before it detonates, its sheer momentum may enable it to approach the target despite countermeasures. Given the scale of modern cargo ships, it may not need to be very close to the target to inflict massive damage, so premature detonation may still enable it to have a devastating effect. Accidents involving even much smaller ships laden with explosives reveal the potential impact involved. For example, when a ship filled with explosives bound for Europe during World War I collided with another vessel in Halifax Harbor in 1917 and caught fire, the resulting explosion obliterated everything within a half-mile radius, inflicted copious damage at greater distances, and created a 60-foot tsunami that wiped out whole communities. That vessel had about 2 percent of the cargo capacity of today's largest cargo ships.

The growing availability and capabilities of USVs enable vessels to be guided weapons without the assured sacrifice of personnel.

The idea of using expendable vessels as weapons is not new; for centuries, navies set old ships aflame and allowed them to drift down current to burn their enemies. More recently, self-sacrificing individuals have driven vessels into targets and detonated them, as in the attack against the USS Cole in 2000. The growing availability and capabilities of USVs, however, enable vessels to be guided weapons without the assured sacrifice of personnel. The U.S. Navy could use such capabilities in wartime; for example, by collapsing a key bridge used by opposing forces, it could forestall ground-vehicle traffic while also blocking a waterway. At the same time, military and homeland security authorities may need to anticipate the possibility that USVs could be used against them, either by adversary nations or by terrorist groups. The attack on the Kerch Strait Bridge, if it was indeed caused by an explosive USV, could be a portent of future warfare.

This commentary originally appeared on RealClearDefense on October 20, 2022. Commentary gives RAND researchers a platform to convey insights based on their professional expertise and often on their peer-reviewed research and analysis.