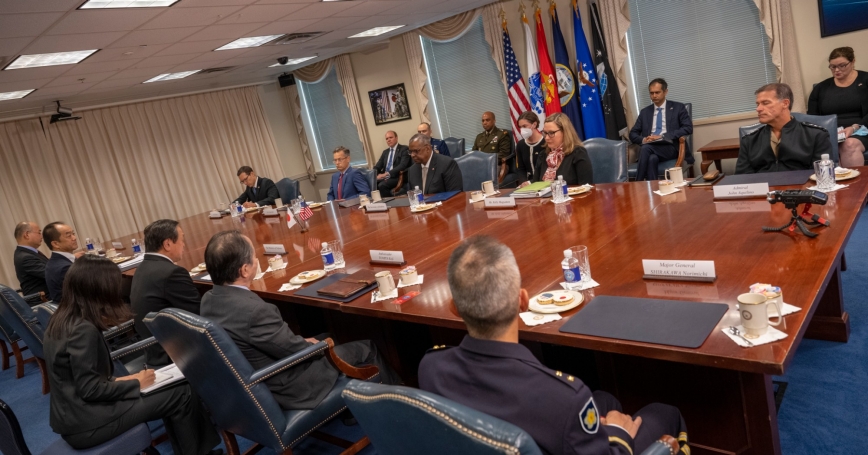 Allies and partners play a pivotal role in the Department of Defense's recently released National Defense Strategy (PDF) (NDS). The strategy is a “call to action…to incorporate Allies and partners at every stage of defense planning.” According to the strategy, “[a]lliances and partnerships are our greatest global strategic advantage” and a core element of how the United States hopes to compete with both Russia and China simultaneously. But for this cooperation to work—especially the combined planning, operations, and investments called for in the strategy—allies may require access to details of U.S. military plans and activities.

U.S. policies for foreign disclosure pose a challenge for the close coordination the strategy envisions. There are complex regulations and a developed bureaucracy in place to vet when and why the Defense Department may release classified information to foreign countries. To achieve the stated goal of leveraging ally and partner capabilities, while still protecting U.S. advantages, the Defense Department should rethink its disclosure policies.

National Security Decision Memo 119 (NSDM (PDF)), issued in 1971, remains the central document for today's Defense Department disclosure policies. As the Nixon administration put it at the time, “It is the policy of the U.S. Government to treat classified military information as a national security asset which must be conserved and protected and which may be disclosed to foreign governments and international organizations only where there is a clearly defined advantage to the United States.”

The first part of this policy is straightforward: Classified information needs to be protected from release or retransmission, and recipients need to have appropriate safeguards in place. The second part—limiting disclosure to when there is a “clearly defined advantage”—is where things get ambiguous. Does the need for a clearly defined advantage foreclose on the possibility of sharing information that may be more broadly in the U.S. interest? Who should evaluate this advantage, and at what level?

Current regulations, in aggregate, apply a relatively restrictive approach based on this overarching policy. Before providing documents or verbal information to any foreign counterparts, including close allies such as the United Kingdom or Australia, military officers must have approval from specifically designated foreign disclosure officers, even if the engagement is directed and approved by senior leadership. For partnerships or substantive areas where there are not prior approvals to disclose information, U.S. officials may face a catch-22 where they cannot reveal enough information to explain why greater cooperation is valuable.

Officials in the Defense Department often face greater hurdles in sharing information with allies and partners than the original policy statement may have intended.

Delving into some of the details of existing regulations shows how each layer of bureaucracy has added further restrictions as they seek to implement NSDM 119. Officials in the Defense Department often face greater hurdles in sharing information with allies and partners than the original policy statement may have intended, or than senior policymakers may prefer given the emphasis on closer cooperation with allies in top-level strategy documents, as well as domain- or region (PDF)-specific statements (PDF).

At the top of the regulatory chain is an interagency document called the National Disclosure Policy-1 (NDP-1). While NDP-1 itself is closely held, publicly (PDF) released (PDF) Defense Department documents specify the criteria and conditions from NDP-1 that must be met for disclosure, including that “disclosure is consistent with U.S. military and security objectives” and that “disclosures will result in benefits to the United States at least equivalent to the value of the information disclosed.” This second criteria implies a transactional logic to sharing classified information, but in many cases the value of sharing can be the maintenance and improvement of an overall relationship rather than a quid pro quo exchange.

Department regulations (PDF) replicate the guidelines from higher-level regulations and delegate disclosure decisions to a principal disclosure authority within each Defense Department component. Each component (such as the military departments, combatant commands, and Defense Department agencies) may only authorize the release of information originating within their component. This can create significant delays as disclosure decisions are routed through different offices, and it makes it difficult to share documents that contain information from a wide range of organizations.

Within the military (PDF) departments (PDF), disclosure decisions are further delegated to foreign disclosure officers (FDOs, or, for the Navy, delegated disclosure authorities). Regulations empower these officials to interpret the NDP-1 criteria and other regulations, or in some cases provide (PDF) a process for exceptions to be considered by an interagency body, the National Disclosure Policy Committee, which also administers the NDP-1. There is some variation in practice—for example, the Army seems to permit oral or visual disclosure without an explicit FDO decision (PDF) in some circumstances.

The FDO system has a pervasive impact on how Defense Department organizations think about foreign engagement across issues and activities. Because of the amount of bureaucratic process required to clear disclosures, a visit from a foreign counterpart requires substantial lead time, even if the topics on the agenda are relatively benign. Army regulations (PDF), for example, identify a 15-day time frame for an FDO decision even for controlled unclassified information. A foreign exchange officer welcomed into a headquarters may face limits on what can be disclosed, or be frustrated by delays in deciding what can be disclosed. Defense Department organizations have limited bandwidth, and the need to go through the foreign disclosure process may be a disincentive to an office that deters it from pursuing greater cooperation with allies and partners. Collaboration on acquisition-related efforts may be especially difficult, given sensitivities about compromising U.S. advantages, even in collaborations with technologically advanced allies.

The current regulations, and the delays or restrictions on disclosure they produce, seem to restrict cooperation in ways that do not take account of the overall benefits of the United States' international relationships. Increasing the number and efficiency of FDOs could help but would not address the underlying question of whether the process in place is appropriate given the priority of greater sharing. There are also reports of practical challenges for FDOs. As Capt. Lucas Thoma writes for the Modern War Institute, FDO skills are not tracked by military service personnel systems, which disincentivizes military personnel from investing effort in specializing in foreign disclosure. Disclosure processes also do not seem to be integrated into professional military education, raising questions about whether the broader force is aware of them.

Differing marking and release procedures between the Defense Department and the intelligence community is another challenge. The intelligence community marking regulations (PDF) require applying a NOFORN (not releasable to foreign nationals) or releasability marking that designates whether information may be shared, and if so, with which countries; its practice discourages the use of a simple “SECRET” marking. Defense Department regulations (PDF), though, state that (except for three exceptions) there is “no authorized DoD use for the NOFORN caveat on nonintelligence information” and encourage the use of a simple “SECRET” marking. Unlike the Defense Department, intelligence rules (PDF) permit the disclosure of documents by nonoriginating components unless a document has additional restrictive markings. Officials may be understandably confused by divergent practices, especially where intelligence and nonintelligence information are combined.

The current regulations seem to restrict cooperation in ways that do not take account of the overall benefits of the United States' international relationships.

The current regulatory system is not the only possible implementation of NSDM 119. Current Defense Department and service regulations are approved by the secretary of defense and other principals, and could be rescinded by them. These officials could issue broader exceptions on specific domains, such as space, about which allies and U.S. officials have expressed particular frustration about current classification procedures.

One place to look for a model on disclosure policies is multinational counterterrorism operations in Afghanistan, Iraq, and Syria. Defense Department regulations (PDF) contain a blanket exception for disclosure to an “actively participating allied force…under conditions of actual or imminent hostilities.” A redacted Department of Defense inspector general report (PDF) from 2016 notes that partners were granted approval of relevant information under NDP-1, although the report also identified “multiple gaps in time” between the start of operations and policies for sharing information with partners. For many allied officers, working with the United States in Afghanistan or the Middle East was a formative experience and could offer many lessons for current priorities. For example, a similar authorization could be expanded for space, which Chief of Space Operations Gen. John Raymond has described as a conflict zone where the United States will succeed only “if we find common cause with our allies and partners.”

To be sure, the United States must remain vigilant in protecting its secrets. While complaints from allies and partners are an important metric of current difficulties, they should not be sufficient to justify a change in U.S. policy—after all, allies may have different interests than the United States. But the process as it stands presents many obstacles and has frustrated U.S. policymakers as well. And despite the potential policy disagreements the United States might have with potential recipients of sensitive information, these countries include close and trusted treaty allies, many of which have received and protected U.S. classified information in the past.

The recently released (PDF) NDS acknowledges the need to “reduce institutional barriers” to sharing information, and proposes improving existing release processes and authorizations. But only a broader rethink, rather than these incremental changes, can address the restrictive conglomeration of regulations that make up the current system. The Defense Department should start by evaluating whether and how the existing disclosure process limits potential cooperation. It may make sense to grant greater disclosure authority to Defense Department personnel who are not FDOs, and explore the use of security classification guides to permit releasability for some information. Additional training may be required, and formal authority for FDOs would not cease, but there could be benefits from increasing the speed of cooperation. An overdue reexamination could ensure that regulations are not hindering broader U.S. strategic goals.

Andrew Radin is a political scientist at the nonprofit, nonpartisan RAND Corporation.

This commentary originally appeared on Lawfare on October 30, 2022. Commentary gives RAND researchers a platform to convey insights based on their professional expertise and often on their peer-reviewed research and analysis.