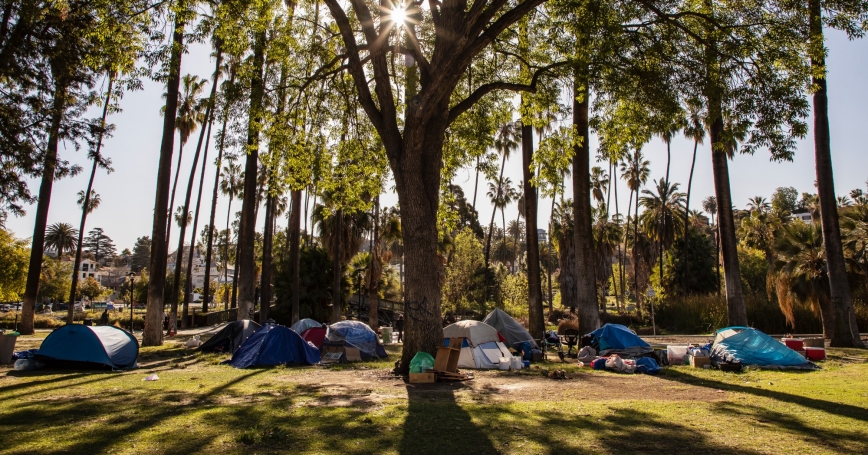 As a policy researcher focused on housing and homelessness, I tuned into the recent Los Angeles mayoral debate with great interest into what our future leaders' plans are to reduce this citywide crisis. What I heard was a discussion filled with the kind of misperceptions that fuel voters' misunderstanding and frustration.

One of the three moderators, perhaps trying to channel a frustrated taxpayer, suggested that “a cynic would say” that if someone pitched a tent on an L.A. sidewalk, that made them eligible for a free apartment—that was then described as costing $600,000 or $700,000 to build. This sentiment was wildly inaccurate in how the homeless service system works—and unfortunately, it went uncorrected by the candidates.

First, to qualify for what is called “permanent supportive housing” (aka a “free apartment”), a person must be deemed chronically homeless and have a documented disability. Those considered chronically homeless must have lived in a place “not fit for human habitation” for one continuous year or one year over a three-year period. Disability status must be provided by a recent diagnosis from a medical doctor.

Second, a unit in permanent supportive housing unit is not free. All individuals are required to pay up to 30 percent of their income in rent. Sure, if a person has zero income, they don't pay rent. But that's rare. Most residents are likely to qualify for some sort of disability benefits. While anyone familiar with the benefits system knows it can take months—sometimes years—to access benefits, the reality is that most unsheltered Angelenos wait just as long to be placed in supportive housing because there are far too few units.

Permanent supportive housing was also conflated with “housing-first” policies. “Housing First” is a much-studied model; its core idea is providing a place to live immediately and mental health or substance use treatment to follow if they're needed. The idea is that once an individual is stably housed, they are in a better position to engage in those other services. The evidence-based “Housing First” model, however, requires housing someone within four months and access to 24/7 psychiatric support. Those are elements that many communities, including Los Angeles, do not traditionally provide, again, due to backlog and lack of resources.

If people live on the streets for a year or more, they often develop chronic health conditions that leave them disabled in addition to being unhoused.

Permanent supportive housing is an independent living arrangement coupled with an assigned social worker. It is funded by the federal government to aid people with chronic homelessness and a documented disability. It is not, however, the intervention that people who are just falling into homelessness usually need. If people live on the streets for a year or more, however, they often do develop chronic health conditions that leave them disabled in addition to being unhoused.

But there are other important housing interventions, including ones the city and county are piloting, that provide shorter-term housing subsidies, and other supports, like employment assistance, to get folks back on their feet. Many people experiencing homelessness want to work, but their circumstances make it nearly impossible. Assistance with low-level legal challenges, which often prevent them from being hired or renting an apartment, is also needed.

Data from the Los Angeles Homeless Services Authority's latest demographic survey estimates that about one in four people on the street suffers from either a serious mental illness and/or substance use disorder—and that is likely an underestimate.

These individuals will need a higher level of care, at least initially, than even permanent supportive housing can provide. And yet the number of beds needed to treat these disorders falls greatly below the estimated needs in Los Angeles. As a result, those who want to enter treatment may wait months or sometimes years for an opening. Overburdened treatment centers then release patients after shorter and shorter stints—creating a revolving door with these and other more costly public systems, such as hospitals, emergency rooms, and county jail.

Homelessness is voters' top concern, polls and surveys find. Despite huge local taxpayer investments, the crisis continues to worsen, leaving many Angelenos skeptical not just of their politicians, but of the whole city's future.

They may not mean to, but Los Angeles politicians continue to imply that there is a primary “fix” for homelessness, be it temporary shelters or permanent supportive housing. But those are just pieces of a very complex puzzle. The region needs a robust continuum of care, ranging from, for example, a one-time cash payment to help prevent an eviction to 24/7 care for individuals with severe health conditions.

Although some efforts like this exist, they have not been scaled up to meet the need.

Sarah Hunter is director of the RAND Center on Housing and Homelessness in Los Angeles and a senior behavioral scientist at the nonprofit, nonpartisan RAND Corporation.

This commentary originally appeared on Los Angeles Daily News on October 26, 2022. Commentary gives RAND researchers a platform to convey insights based on their professional expertise and often on their peer-reviewed research and analysis.