Q&A with the Experts: Puerto Rico 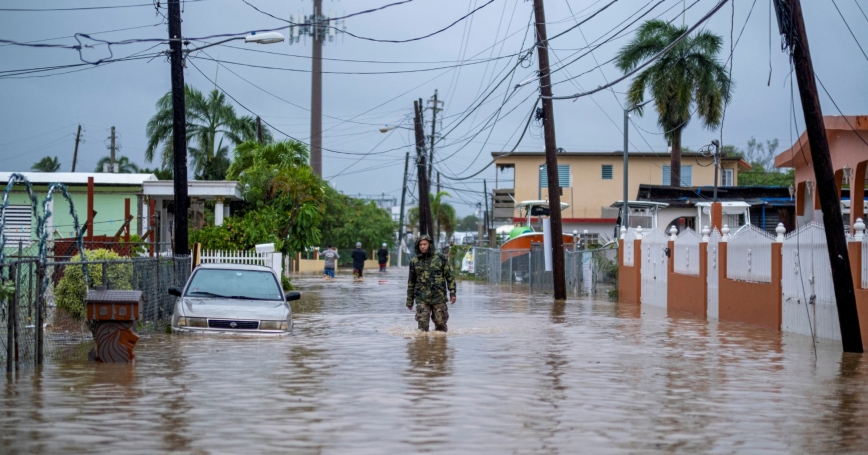 A member of the Puerto Rico National Guard wades through water in search for people to be rescued after Hurricane Fiona in Salinas, Puerto Rico, September 19, 2022

When Hurricane Fiona struck the U.S. territory of Puerto Rico on Sept. 18, electricity went out across the island. While nearly all service has since been restored, about 40,000 on the island remain without power. It was a reminder that recovery from 2017's Hurricane Maria is far from complete and is complicated by subsequent compound disasters that have also included major earthquakes in 2019 and 2020 and the COVID-19 pandemic.

RAND's Homeland Security Operational Analysis Center (HSOAC) was a major contributor to Puerto Rico's economic and disaster recovery plan (PDF) in 2018, which detailed 270 specific courses of action needed across infrastructure, communities, and natural systems. We asked some of those researchers about the difficulties Puerto Rico is still facing, from its power grid to increasingly powerful storms.

Five years after Hurricane Maria, should we have expected that there would still be such widespread power loss?

Ismael Arciniegas Rueda: Rebuilding the electric grid in Puerto Rico—but at the same time keeping the lights on—is very complex. As a data point, it takes, on average, 10 years to complete a high-voltage transmission line. So five years to have completed a completely new grid is too short. The critical metric now after Hurricane Fiona is going to be the time to recover power for everyone in Puerto Rico. That should be much faster this time because of multiple steps completed since 2017 to improve energy resilience.

Aimee Curtright: After Maria hit in 2017, despite the fact that many generation assets were old—many are oil-powered plants that are not only outdated but create a reliance on imported petroleum and cause air pollution—the generators themselves were able to function pretty quickly after the storm. The delays in getting the lights back on were mostly related to getting the electricity from the generators to the customers.

The power lines that took electricity from generators on one side of the island to energy users on the other couldn't be reached easily (poor roads), were damaged and difficult to repair (vegetation management was inadequate), and the right supplies weren't always there when the repair crews arrived.

On this last point, many people have been worried that “permanent” repairs done immediately post-Maria may not hold up—and this has worried me every hurricane season since Maria—despite ongoing investment and upgrades. The jury is still out on how those repairs did in this storm, although after 10 days it seems like power is back to all but about 500,000 residents. After Maria, it was about 11 months before everyone got electricity again.

What sort of solutions might improve the overall electric resilience on the island?

Curtright: At the simplest level there are two paths. One is to focus on repairing or replacing large-scale generation and keeping the grid as one single connected system. At the other extreme, you can divide the grid into many smaller “islands” or microgrids, and rely on smaller-scale distributed generation, such as rooftop solar and batteries. Puerto Rico is at a potential crossroads of which approach to take. The power companies LUMA and PREPA have been proceeding largely along a path of investments that keep the centralized grid architecture. Nonprofits and businesses and even individual homeowners have started to take matters into their own hands by installing rooftop solar and backup batteries.

There's no shortage of ideas. The issue is execution, which requires coordination, technical expertise, time, money, and making balanced decisions, because there are trade-offs with different choices.

Meantime, the U.S. Department of Energy is conducting an analysis of how to make Puerto Rico 100 percent renewable to meet the legislative mandate. But some of the department's own technical experts have argued that this is not the best approach anywhere, much less for Puerto Rico. This is because as you add more intermittent renewables (like solar) into any system, it becomes increasingly difficult and expensive to manage the hourly, daily, and seasonal variability.

So there's no shortage of ideas. The issue is execution, which requires coordination, technical expertise, time, money, and making balanced decisions, because there are trade-offs in cost and resilience with different choices.

Tom LaTourrette: There is a need for cheaper and faster interim solutions, too. Backup power systems are already required for some essential services, such as hospitals. However, given the unreliability of the grid in Puerto Rico, it may be time to mandate secondary power systems more widely to include emergency response, non-hospital medical services, criminal and civil justice, schools, relief centers, grocery stores, banking, and other essential services. There are several standards for backup power systems (e.g., IEEE 446-1995, NFPA 110, and NFPA 70) that could be incorporated into building codes. The building stock turns over very slowly, however, so such codes would need to apply both proactively and retroactively to ensure that current buildings are included.

Rahim Ali: After Maria, Puerto Rico made a great decision in adopting the latest edition of the 2018 International Building Code and 2018 International Residential Code. However, the government estimates that approximately half of Puerto Rico's housing stock was built without permits. This informal method of construction can make enforcement of codes and standards challenging. Communication and enforcement of these policy changes will be crucial to their effectiveness.

Arciniegas Rueda: Another way at that is to promote companies that offer resilience-as-a-service that Puerto Ricans who are interested would pay for. Resilience-as-a-service means that you pay someone to install some kind of backup power on your property. The company owns the equipment and can, for instance, sell power it generates back to the grid. But if for any reason there is a blackout, they are on the hook to provide you with electricity no matter what. States like Texas have companies that actively offer this now. But you might need market incentives so that providers of backup power can have decent economics to pay for the equipment with what they get from user fees and what they get from selling power to the grid.

One thing to add here is that Puerto Rico power generation still heavily depends on fossil fuels as fuel for electricity generators, as well as other needs. So, as an island, it needs to import such commodities—and that has been affected by the Ukrainian War shock to all commodities—not just oil but also food.

With climate change intensifying storms, what does that mean for rebuilding Puerto Rico's infrastructure?

Melissa Finucane: Puerto Rico is particularly vulnerable because climate warming means intense storms come with heavy rain, which causes landslides in its mountainous terrain. (Hurricane Maria triggered more than 70,000 landslides.) The landslides create sediment that fill the reservoirs, reduce capacity to store freshwater, and impair the quality of drinking water supplies. Landslides also damage transportation routes and the coastline ecosystem. The small size of the island means it has limited space to store fresh water, gas, or materials for rebuilding.

The compounding of multiple hurricanes (and their overlapping recovery periods), along with major earthquakes, also means that over time, it's hard for Puerto Rico to regain its socioeconomic functioning. There is a domino effect through the supply chain where the basic ingredients for the functioning of society—physical, human, or social capital—become increasingly strained.

The repeated disasters and other causes were already pushing Puerto Ricans to move away. From 2006 to 2016—in part because of an economic contraction—there was a net loss of 525,000 residents—or 14 percent of its population. And the recovery plan (PDF) notes that this trend was accelerated by Hurricane Maria. There's a shortage of professional workers in many sectors, especially health care. And hurricanes make it hard to predict future losses.

Ali: That said, experiences from previous recovery efforts may improve emergency response and preparedness efforts. While in San Juan in 2019, I recall when Hurricane Dorian was expected to make landfall. Days before the expected storm, businesses and residences took protective measures such as utilizing hurricane shutters, placing sandbags in front of entrances, and increasing redundancies in backup power generation. Although Hurricane Dorian did minor damage, I observed that experiences from previous recovery efforts made the community more vigilant and cautious.

LaTourette: A related challenge is that there's little point—or desire—to get things back to where they were, because that was in many ways inadequate. I think this partially stymies recovery, because the recommended actions require more resources and capacity than are currently easily available. The economic and disaster recovery plan (PDF) for Puerto Rico estimated that about $132 billion was needed. So “hurricane recovery” very quickly blurs into “economic recovery,” which is a much bigger and more daunting undertaking.