What's Next After Biden's Announcement on Cannabis and Racial Equity? 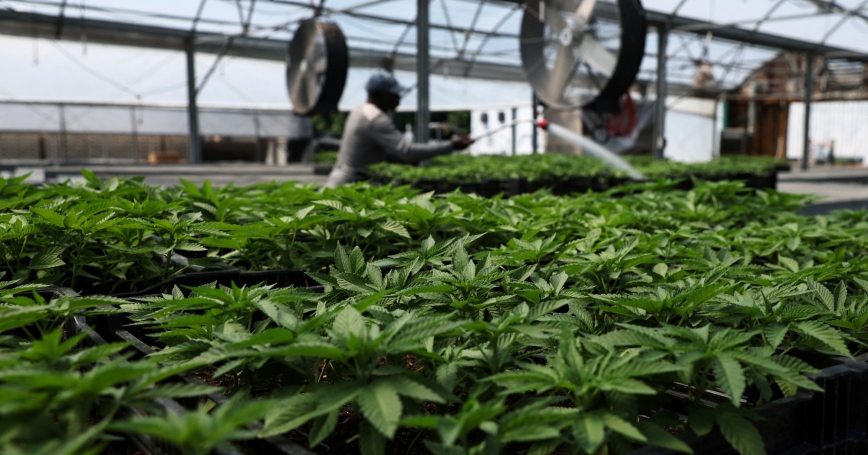 A worker waters marijuana plants for the adult recreational market inside a greenhouse at Hepworth Farms in Milton, New York, July 15, 2022

President Joe Biden's announcement about cannabis policy reform last week underscored how keeping it illegal disproportionately harms people of color. “Too many lives have been upended because of our failed approach to marijuana,” he said. “It's time that we right these wrongs.”

Biden is pardoning those convicted of simple cannabis possession under federal or Washington, D.C., laws. It's unclear how many people this will affect, but the figure is certainly in the thousands. He also urged states, where the vast majority of convictions for possession take place, to follow suit, which could have a significant impact. RAND Corporation research found that in Virginia alone, automatically expunging criminal records for adult cannabis possession offenses could affect more than 200,000 individuals, about half of them people of color.

Biden's move is an important step in changing the federal approach to cannabis. But governments need to be actively thinking of other ways to right the racial wrongs stemming from decades of prohibition. One approach is to use legalization as a vehicle to help build wealth in communities of color.

Other places are giving preferences for cannabis-related business licenses to groups who have been disproportionately harmed by prohibition.

But if the goal is to build wealth or invest tax revenue in communities of color, policymakers need to pay close attention to prices.

Governments need to be actively thinking of other ways to right the racial wrongs stemming from decades of cannabis prohibition.

Legalization dramatically reduces the cost of producing cannabis for several reasons. First, when someone buys cannabis, cocaine,or heroin in the illegal market, part of the cost is to compensate the drug dealer (and everyone else along the supply chain) for the risk of arrest and incarceration. With legalization, that risk disappears. Second, if large growers are allowed to enter the market, they can produce cannabis more efficiently than smaller businesses. Finally, it is easier for legal businesses to take advantage of changes in technology that increase yields or help with packaging.

All of that doesn't necessarily mean retail prices must drop, but that is how it's playing out because states allow profit-maximizing companies to sell cannabis. In Oregon, the median price for one gram of cannabis flower fell from $10.50 in October 2016 to $4.17 last month. And in Michigan, there were reports that the price for an ounce of cannabis fell about 40 percent from last January to January this year.

Prices matter when thinking about legalization and racial equity. As prices fall, it will become harder for smaller entrepreneurs to compete and many will go out of business. And if cannabis taxes are a percentage of the price (which is common in many legalization states), the tax revenues will decrease as prices fall—unless consumption soars. This could mean fewer resources for any related programs intended to support and build wealth in communities of color.

This is not an idle concern. If trends continue in Colorado, where cannabis taxes are largely a function of the price, this will be the first year the state sees a decline in cannabis tax revenues.

The price drops we've seen so far have happened despite cannabis still being prohibited at the federal level. If it were no longer illegal to move cannabis across state lines, prices could plummet even more because the market could quickly consolidate.

Indeed, RAND has estimated that all the cannabis that people in the U.S. consume could be produced on a few dozen industrial-size farms. Imagine if federal law changes allowed Amazon, for example, to sell cannabis. Or if cannabis starts to be sold at Walmart or every local supermarket. It will quickly become hard for small growers, producers, or dispensaries to compete.

There are multiple options to help prevent that. One would be to limit cannabis sales to government-run stores, which has been the approach in some parts of Canada. This would let the state control the retail price and the types of products that are sold. It would also allow the state to keep all the revenues and use some of them to support communities of color, instead of having the profits go to private cannabis businesses, which are largely controlled by white people. Some states still use this model for liquor.

States, as well as the federal government, could also implement tax regimes that aren't as sensitive to price drops. For example, New York and Connecticut (PDF) are planning to tax cannabis based on its delta-9-tetrahydrocannabinol content (THC, the main intoxicant in cannabis) instead of focusing exclusively on price. This is akin to how the federal government taxes alcohol. Another approach would be to set a minimum price (PDF) on cannabis products or THC.

Cannabis legalization isn't just a yes-or-no choice. There are many ways for state and federal policymakers to shape the market and tax it.

The cannabis policy landscape was shifting quickly even before Biden's announcement. Today, according to a 2021 Gallup poll, more than two-thirds of the country supports the legalization of cannabis use, and approximately 44 percent of the population lives in states that have passed legalization. Although the Senate didn't take it up, the House passed the MORE Act in April, which would have removed cannabis from the list of scheduled substances and eliminated federal criminal penalties for people who manufacture, distribute, or possess cannabis.

Cannabis legalization isn't just a yes-or-no choice. There are many ways for state and federal policymakers to shape the market and tax it. With deliberations in Washington, D.C., beginning and more states set to vote on the issue in November, now is the time for lawmakers to take stock of how potential changes will or won't help communities of color.

Beau Kilmer is the McCauley Chair in Drug Policy Innovation and codirector of the Drug Policy Research Center at the nonprofit, nonpartisan RAND Corporation.

This commentary originally appeared on NBC News THINK on October 10, 2022. Commentary gives RAND researchers a platform to convey insights based on their professional expertise and often on their peer-reviewed research and analysis.