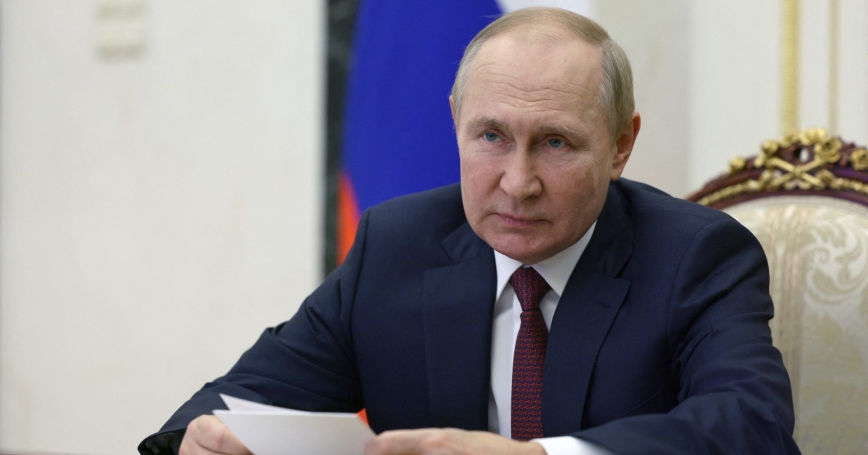 Russian President Putin attends a conference of heads of security and intelligence agencies of the Commonwealth of Independent States member countries remotely in Moscow, Russia, September 29, 2022

Photo by Gavriil Grigorov/Sputnik via Reuters

The notion that Russia, a nuclear superpower, could use its nuclear weapons in a war of choice against Ukraine—a country a fraction of Russia's size, population, and military and economic strength—seems absurd. And yet, while Russian propagandists regularly call for nuclear strikes, the Western predictions about whether Russia will use nuclear weapons range from “unlikely” to a near certainty that the United States and Russia will enter a direct nuclear exchange.

Russia has never used nuclear weapons in war before so there is no good benchmark, nothing to reliably measure the current risk against. Most arguments show that using nukes would not help Russia achieve its objectives at an acceptable cost. However, these arguments are implicitly predicated on the assumption that Russian President Vladimir Putin's decisions are motivated by a basic cost-benefit analysis, where the costs are adequately assessed and the benefits are security, stability, and development.

So far, the dominant view of the war, and of Putin's decisionmaking, has been that he is indeed acting rationally, albeit on inaccurate information. There is also the compelling evidence of Putin's wealth-maximizing rule for the past 20 years, even if the benefits of progress were not evenly distributed. In the same period, Russia has achieved many of its foreign policy objectives at a relatively low cost.

And yet, the mounting costs and mistakes of this war call the rational-actor assumption into question. If the initial miscalculations can be excused, the recent unlikely-to-pay-off-gambits (the chaotic mobilization and annexation of additional four regions of Ukraine) are increasingly hard to explain in the cost-benefit paradigm. After all, how long can one be misinformed? Why send untrained mobilized soldiers into battle if Russia's main problems are poor tactics, low morale, and persistent logistical issues? Why make negotiations impossible while losing ground?

If Russia is not fighting a war for security, but a war for its imperial identity, then a monetized cost-benefit analysis may not be entirely applicable.

Of course, Putin would not be the first leader to pour soldiers into a lost cause. And perhaps Russia's quantity will ultimately overtake the Ukrainian's quality and turn the tide. But there is another possible explanation. If Russia is not fighting a war for security, but a war for its imperial identity, then a monetized cost-benefit analysis may not be entirely applicable. Unfortunately, identity is not a negotiable issue where expected value calculations determine the bargaining space. In many ways, the more useful lens through which to view identity might be akin to religious belief.

This brings to mind a telling episode from the Red Square annexation rally, where an actor and a former Orthodox priest named Ivan Okhlobystin proclaimed that the “special military operation” should, in fact, be called a “holy war.” Okhlobystin went on to explain to the crowd that “jihad” meant both the fight against the enemies of Islam and one's own sins, and that in Ukraine, the stakes for Russia were similar—a battle for the very soul of his nation and its people.

Okhlobystin is not alone. His words were recently echoed by the leading Russian propagandist Vladimir Solovyov. Russian commanders have also repeatedly reminded their soldiers that they are fighting a “holy war” against the gay parades and Satan himself, an argument Putin also used during his annexation speech in the Kremlin. Indeed, Putin's proclamation of Moscow's jurisdiction over areas Russian troops don't even control was reminiscent of Abu Bakr al-Baghdadi's proclamation of the Islamic State's jurisdiction over the entire Muslim world.

As uncomfortable as it is to propose that Russia might be well on its way to becoming a nuclear equivalent of ISIS, Russian narratives about the war, and Russian troops' conduct within it, share many aspects to global jihad as a “movement of rage”; both seem to aim for apocalyptic ideology and nihilistic violence. If Putin personally subscribes to the “holy war” narrative, he may use nuclear weapons simply to show that he will stop at nothing to prevail in such an eternal struggle.

Even if Russia is waging its war for the nonnegotiable reasons of identity wrapped up in religious zealotry, this in no way justifies the West giving in to its nuclear blackmail.

Of course, it's impossible to know Putin's state of mind. But even if Russia is waging its war for the nonnegotiable reasons of identity wrapped up in religious zealotry, this in no way justifies the West giving in to its nuclear blackmail. As scary as it may be, supporting Ukraine is not, at this point, simply a matter of principle. Enabling Russia's blackmail doesn't prevent the catastrophic costs of nuclear escalation. It merely shifts those costs away from Russia and into the future, inviting other nuclear states to pull the same move for their conquests, which could well lead to further nuclear proliferation and conflict spirals.

Russia's nuclear saber-rattling has shifted the stakes of the war. Now, the survival of the global nuclear nonproliferation regime is at stake—something even most cynical realists cannot give up easily. To stave off the catastrophe, the United States could engage the nuclear powers Russia trusts. After all, the stability between China, India, and Pakistan rest, in part, on the nuclear taboo, too. They could help Putin understand that he still has time to spin a loss in such a way that he will be remembered by the Russian people as a visionary who was betrayed by his lying generals. But if he nukes Ukraine, he will likely be remembered as a madman, if there is still anyone left to remember.

Krystyna Marcinek is an assistant policy researcher at the nonprofit, nonpartisan RAND Corporation and a Ph.D. candidate at Pardee RAND Graduate School.

This commentary originally appeared on The Hill on November 1, 2022. Commentary gives RAND researchers a platform to convey insights based on their professional expertise and often on their peer-reviewed research and analysis.