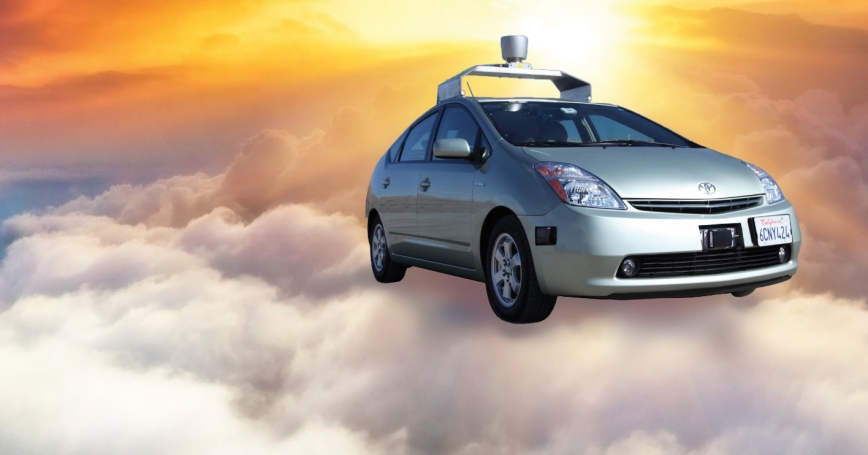 You’re sweating, exhausted, and stuck on a sultry afternoon in a major jam on the notorious 405 Freeway in Los Angeles, or you’re clutching the steering wheel as your teeth chatter during a morning Chicago snowstorm on a congested Dan Ryan Expressway. You may be swearing about the crawl caused by drizzle on Washington’s Beltway or by a fender-bender on New York’s FDR Drive.

Suddenly, an impatient driver from an adjacent lane swerves into yours. Or the motorist ahead of you jams on his brakes. Or both.

It’s sadly familiar across the United States, where drivers fume in stalled traffic, end up in tens of thousands of accidents, and lose to road congestion by some estimates billions of hours of productive time and billions of dollars for added fuel costs.

“The social benefits of autonomous vehicles will outweigh the likely disadvantages.”

In the next decade or so, a smoother path may open. If automotive technology continues some of its recent well-documented advances, motorists across America, and, indeed, the planet, may embark soon on a new era of dream driving. Some say we’re on the brink of a new day when cars drive themselves—and many other circumstances may change significantly, as a result.

“Our research finds that the social benefits of autonomous vehicles—including decreased crashes, increased mobility, and increases in fuel economy—will outweigh the likely disadvantages,” says James Anderson, a senior behavioral scientist who led a recent RAND study that explores the communications and regulatory challenges and liability issues raised when vehicles navigate on their own or with minimal human intervention. “This is an area where things are zooming along faster than many experts expected and we need to think through now what it might mean to society.”

Google, as of March 2013, had logged more than 500,000 miles of autonomous driving on public roads without a crash, though, to be fair, it also had highly trained operators aboard, ready to take over in challenging situations. Mercedes-Benz, Tesla, GM, and Nissan—big names in the auto industry—are racing to lead the pack to get smart, self-driving vehicles on the road.

The technological and mechanical components for self-driving cars already have leaped into existing models, some of which already park themselves, stay in designated lanes, warn of obstacles or objects in the driver’s blind spots, and even brake or improve stopping in certain emergencies.

Points to Consider with Autonomous Vehicles

If these kinds of features can be synched together and software and computing power can be stepped up to analyze and assess information provided by rapidly advancing, wirelessly communicating on-vehicle cameras and sensors, RAND researchers see an array of transportation benefits.

“People have proven to be generally poor at driving,” says Anderson, and statistics support his harsh judgment. If cars can drive themselves well, experts envision huge safety improvements, in both auto fatalities (there were 32,000 of those in the U.S. in 2011) and accidents (in which some element of human error was to blame in roughly two-thirds of cases).

Autonomous vehicles also likely will reduce energy use and fuel emissions, both through more efficient operation and because, with fewer crashes, cars may be made lighter. Because self-driving cars won’t get bored or distracted, and don’t need to make ego-dives in and out of lanes at alternately fast and slow speeds, experts like Anderson estimate that existing roads could accommodate twice or three times the number of cars, all moving faster and more safely.

Self-driving cars could present opportunities for those who don’t drive, such as seniors, younger people, the disabled, and the vision impaired.

Commuters, of course, could become more productive if they could take care of business—answering emails, making phone calls, reading and writing—while en route to their jobs in cars that handle all or most of the chore of driving, Anderson and his colleagues at RAND say. The productivity gain would be something to honk your horn about, considering that U.S. officials say 8.1 percent of Americans commute for an hour or longer.

As RAND researchers found, self-driving cars could open all kinds of new horizons for those who temporarily can’t drive—when cars are in the shop or injuries get in the way—or for those who don’t, including seniors, younger people, the disabled, and the vision impaired.

If cars can drive themselves, and if they could be linked into a transportation network, motorists might see even greater life changes: Cars might be programmed to pick them up and deliver them to workplaces, where there would be drastically reduced need, RAND researchers suggest, for what’s now a big, land-grabbing use: parking. By one estimate, 31 percent of the space in central business districts in 41 U.S. cities is gobbled up by parking; self-driving cars could drop off passengers, and then head to more distant, satellite lots to recharge or refuel. Or they might be dispatched to provide rides for seniors and moms to shop during the day.

California, Michigan, Florida, Washington, D.C., and Nevada lead the way in creating laws to regulate use of autonomous vehicle technology; the rest of the nation may soon follow. Will the U.S. have a regulatory patchwork, and what key points should policymakers keep in mind about self-driving cars? Here’s what RAND researchers recommend:

For motorists who are ready to rip their hair out by the roots in frustration with driving as it exists today, however, RAND researchers urge not only patience but awareness that the road ahead for self-driving vehicles may have significant speed bumps.

The technology for self-driving vehicles isn’t fully developed and ready for robust use—yet—and autonomous driving requires mastery of complexities, including varied weather, terrain, and road rules; whether an object in the road is a blowing brush or a child; if all onboard equipment, especially critical sensors and cameras, are operating fully and well; and how multiple self-driving vehicles might communicate and work together.

Cost, obviously, will be a driving issue. This could be challenging to resolve because many benefits of self-driving cars won’t accrue to their purchasers and their positive societal effects may justify some form of government subsidy to encourage their spread and use.

“The future holds promise for autonomous vehicles,” Anderson says, “but we’ll have to see—and policymaking will play a crucial role in how we advance, or don’t, in this area.”

But these conveniences also can help hacking, as recent incidents show: In 2010, a 20-year-old disgruntled employee in Austin, Texas, tampered with data on a web-based system used to remotely disable repossessed vehicles, leaving more than 100 drivers unable to start their cars or stop the horns from blaring. That same year, University of Washington researchers exposed flaws in onboard networks by embedding malicious code to disable a car’s braking system. Last year, two DARPA-funded researchers connected a laptop to a Ford Escape, and then programmed the vehicle to override driver commands to divert it remotely to a vacant field. Those researchers showed on a Toyota Prius that they could remotely control its acceleration, steering, brakes, horn, and even its seat belts.

Rudimentary vehicle-security measures have not kept pace with sophisticated new computer systems. Onboard networks likely will grow more attractive to hackers—whether their aim is to steal a car, eavesdrop on a conversation, stalk a potential victim, or cause a devastating traffic accident. A review and upgrade of vehicle security standards are long overdue.

Where Will Driving Accelerate?

The world knows that Americans are car-crazy, but which other countries are likely to see growth in driving in the 21st century? Recent RAND research suggests that, after the U.S., Australia, Brazil, and Russia (in that order) will see increases in driving; this will be less so for Germany, China, India, and Japan. Per capita income is not decisive in determining if nations likely will see more driving. Researchers examined nine factors, including the prevalence of a car-friendly infrastructure in a given nation, the age of its population, and how many of its people need to travel to work. In Australia, a sprawling geography encourages auto use, while in Japan, an aging and densely concentrated population and excellent mass transit will discourage it. Though both economically burgeoning, India and China have giant populations; both will need to make ongoing and substantial investments in roads and other infrastructure to curb existing traffic congestion and to encourage more use of cars and mass transit. Brazil’s growing working population and car industry both suggest driving will samba ahead, while an energy boom and infrastructure investments make it appear that more Russians will say ‘Da!’ to more driving. As has been shown by the Germans—legendary carmakers and high-speed drivers on their autobahns—public policies can influence whether driving increases. Since unification, Germany has discouraged driving with high costs for permits and parking.