Putting Health to the (Taste) Test 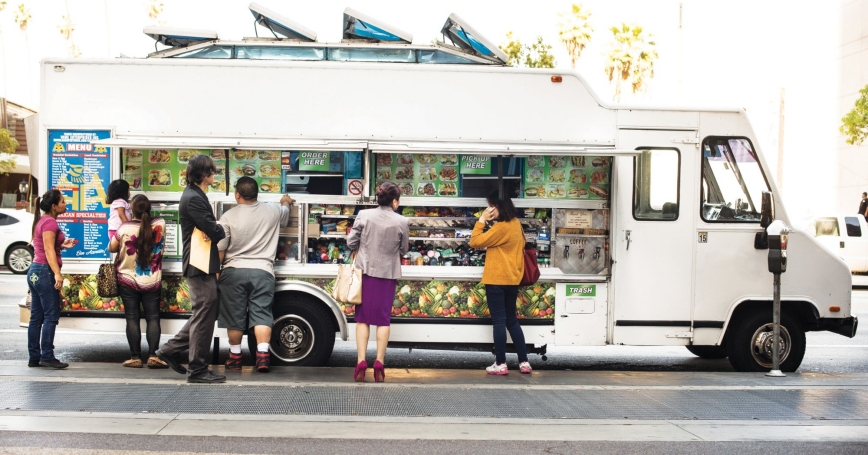 RAND partnered with a dozen Los Angeles-area food trucks to test whether healthier menu options would sell. The trucks, known as loncheras in the local Spanglish, have been a part of blue-collar Los Angeles for generations and often serve low-income neighborhoods where obesity rates are high.

Edwin Noguera had a few options as he considered lunch on a recent afternoon on a busy street corner near downtown Los Angeles. “Deep fried pork belly,” promised one nearby food truck; another offered a greasy vision of meat and white cheese oozing from a thick block of bread.

But Noguera stopped instead at a truck decorated on its side with a ribbon of ripe-red tomatoes and dark-green broccoli spears. “I have to watch what I'm eating,” he explained. “I'm trying to get my abs.” He ordered a plate of watermelon, salad, and grilled meat—and became an unwitting participant in an unusual RAND experiment.

In recent months, RAND researchers have teamed up with a dozen Los Angeles lunch trucks to test healthier menu items—chicken breasts and grilled fish alongside the usual tacos and hamburgers. The results have been modest but promising. The healthy meals were never best-sellers, but they did well enough that a majority of the truck owners plan to keep them on the menu. 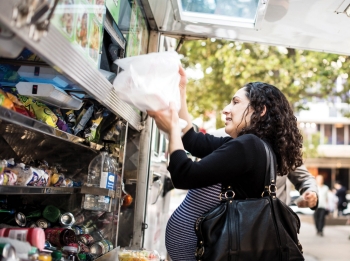 That's important, because the trucks tend to serve working-class Latino communities, where obesity rates are high and healthy food can be scarce, lead researcher Deborah Cohen said. “It's important that the providers are offering these meals,” she said. “I think what we showed is that it's completely feasible.”

Cohen has spent years arguing that restaurants, grocery stores, and other food outlets should take more responsibility for the nation's obesity epidemic, and more action to stop it. More than one-third of U.S. adults are obese, according to federal statistics, adding billions of dollars to the nation's health care costs each year.

A lunch truck may seem like an unlikely testing ground for healthy menu items, the four-wheel equivalent of a fast-food joint. But most are mom-and-pop operations where cooks make food by hand, using fresh ingredients, and often for underserved communities. Cohen called them a “good lab.”

These aren't the trendy food trucks that have started to sell fusion tacos and reimagined grilled cheese to hip, young urbanites. These have been part of blue-collar Los Angeles for generations, where they're known as loncheras, after the Spanglish word lonche, for lunch.

Working with a $275,000 grant from the National Institutes of Health, RAND researchers enlisted nearly 20 loncheras for a six-month trial they named “La Comida Perfecta,” or “The Perfect Meal.” About a third of the truck owners later dropped out, leaving 12 who worked with a nutritionist, created their own healthy meals, and then put them on the menu.

Their creations had to include a cup of vegetables, half a cup of fruit, two ounces of whole grains, three ounces of meat, a cup of milk or its equivalent in cheese—and they had to come in under 700 calories. Within those guidelines, truck operators came up with plates of ceviche ringed with avocados; meaty tacos stuffed with cabbage and peppers and served with salads; chicken sandwiches; shrimp tostadas; and one “Crazy Good Quesadilla.” 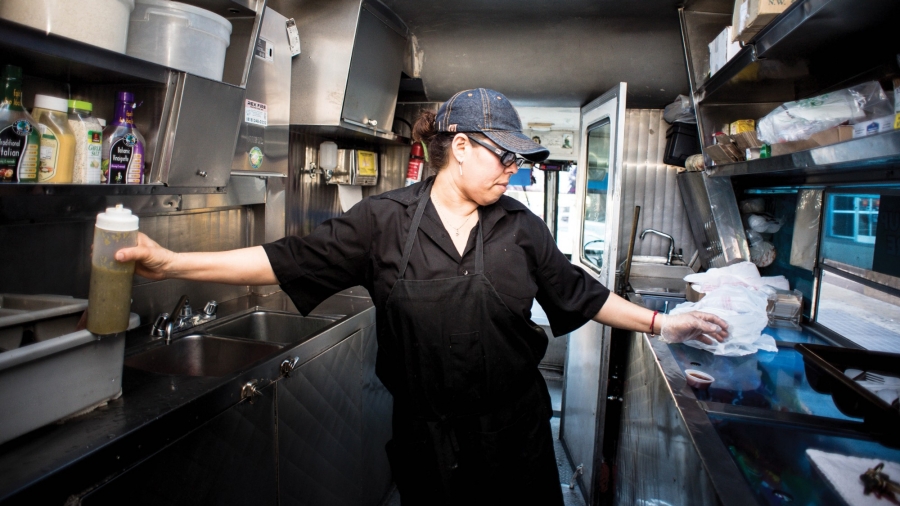 Elba Ramirez works the busy lunch crowd from inside her food truck. She added four healthy menu items, and has had enough success with the lunch-time crowd that she's considering adding two more.

Longtime truck owner Elba Ramirez added four healthy menu items, including a chicken salad and a “famous” turkey burger. She parks her truck in the shadow of a high-rise bank building not far from downtown Los Angeles and had enough success with the lunchtime crowd that she's considering adding a veggie burger and a chicken-and-rice bowl.

“It's been a good idea,” she said. “The people who try it keep buying it. The people are happy, then I'm happy.”

The six-month pilot program didn't yield big sales numbers at most trucks, but it did yield some valuable insight into the challenges, big and small, of changing food habits, the researchers said. Truck operators had trouble swapping out their corn tortillas for whole wheat, for example, and their Latino customers especially didn't care for the brown rice that replaced their traditional Mexican rice.

Nearly half of the truck customers were regulars, surveys found, and most knew what they wanted without even looking at the menu. In poorer neighborhoods and blue-collar work sites, that was usually a couple of $1 tacos, not a $7 plate with fruit and salad.

In all, the healthy menu items accounted for around 3.5 percent of all entrees sold from the lunch trucks during the six-month trial. The number was closer to 10 percent at the top-performing truck, which served a wealthier and more diverse business district; and closer to 2 percent for the lowest-performing trucks. 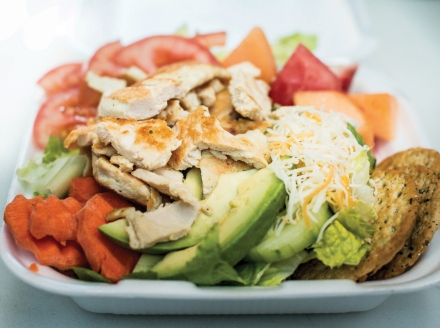 The study's recipe for a healthy meal:

“It may not seem like a lot, but the number of meals sold is on par with sales of new items at more popular franchise restaurants,” Cohen said. She pointed to another statistic as evidence that the program was at least a limited success: Two-thirds of the truck owners plan to keep the healthy meals on their menus. “If we can do it with loncheras, nobody has an excuse,” she said.

Her research partner at RAND, Ben Colaiaco, stopped by one of the food trucks on a recent afternoon to deliver a $250 check for participating in the program. He found Benjamin Hernandez and his wife, Yolanda, closing out another long day on the truck they have driven for 29 years.

Hernandez knows many of his customers by name at the work sites he frequents east of Los Angeles. He also knows which ones are diabetic, like he is. He said he joined the RAND program to offer them a healthier variety of food—grilled fish, ceviche, Yolanda's Famous Chicken Salad. And, he added, he wasn't shy about redirecting customers who needed it toward those healthier options.

“We didn't make much, but we didn't lose anything,” he told Colaiaco. “I think it was a good experience, really. Variety for the customers is a positive.”

“Are you going to continue to offer these dishes?” Colaiaco asked.

Hernandez seemed surprised at the question. “Yes,” he said. “Yes, of course.”

This essay was also published in Newsweek on July 3, 2015.