Opioid Rising: How to Stop the World's Growing Heroin Crisis 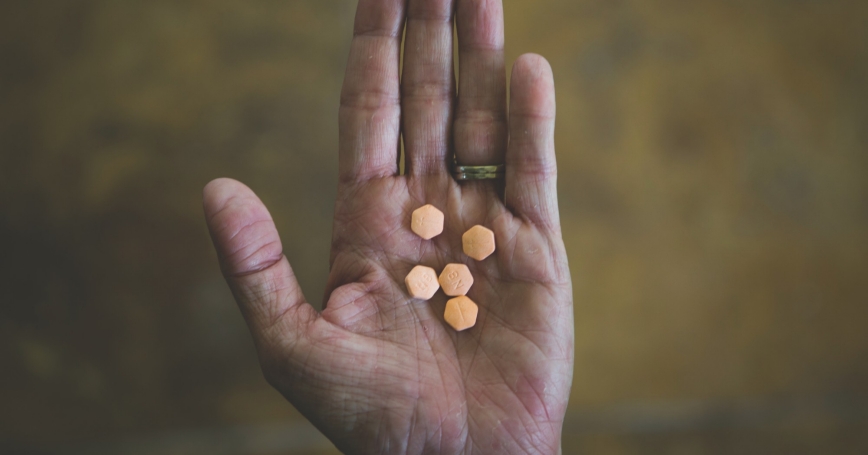 Buprenorphine, a physician-prescribed tablet, is used to treat opioid addiction

Sixty-seven people will die today in America because of heroin or narcotic painkillers, if recent overdose statistics are any guide.

A series of recent RAND reports has offered strategies to save those lives and thousands more around the world. One explored ways to combat the flourishing poppy fields in Afghanistan that supply 90 percent of the world's illicit opium. Another took a close look at a treatment for addicts meant to ease their relentless demand for the drug.

The timing of these reports was grimly appropriate. The Centers for Disease Control and Prevention now considers opioid drug abuse to be a full-fledged epidemic.

“We're in crisis. We have to do something,” said Michael DeLeon, a New Jersey filmmaker and former addict who has committed himself to documenting the street-level toll of heroin and painkiller abuse.

“We have a big hole full of quicksand,” he said, “and people are drowning in it.”

Buprenorphine: Within and Just out of Reach

Paul Yabor spent enough time with a needle in his arm to shake his head at the simple notion of ever really hitting rock bottom. He prefers to say he had a moment of sanity one afternoon in a Philadelphia flophouse, surrounded by the hollow-eyed faces of fellow heroin addicts.

He was 51 years old, with the beaten body of a lifelong hard-drug user. “When you're younger, you know you're going to live forever,” he thought. “I can no longer live with that illusion.”

His salvation came in the form of a little orange tablet that he could hold under his tongue to block the gnawing cravings of withdrawal. It's called buprenorphine—“bupe” on the street—and when it was approved in 2002 for widespread use against heroin and other opioid drugs, experts predicted it would change the face of addiction medicine.

Buprenorphine's uptake as a recovery drug has often been painstakingly slow, even as the abuse of heroin and prescription painkillers became a national crisis.

Instead, its uptake as a recovery drug has often been painstakingly slow, even as the abuse of heroin and prescription painkillers became a national crisis. A recent series of RAND reports found that the number of doctors certified to prescribe the drug still lags far behind the need in large areas of the country. In part, that reflects the double edge of buprenorphine, a wonder addiction drug that can itself become a drug of addiction.

There's no such debate for Paul Yabor. His daily dose allows him to keep walking when he hears the heroin touts in his neighborhood whispering, “Samples, samples.” He's been clean for two years.

“Without it, I'd be drug-seeking,” says Yabor, who works now as an overdose-prevention specialist and HIV educator. “It allows me to get up in the morning and have the strength and vitality and support to make it through my days.”

Buprenorphine works by plugging the same receptors in the brain that heroin and opioid painkillers use, sealing them off. It's similar to methadone, with one crucial difference: It can be taken at home, without the stigma of a daily trip to the methadone clinic. Most doctors can prescribe it after eight hours of special training.

That has “dramatically increased potential access” to treatment in recent years, according to RAND researchers—but not everywhere. Nearly 47 percent of U.S. counties still had a shortage of physicians waivered to prescribe buprenorphine in 2011, the researchers found, mostly in large swaths of the rural Midwest. The numbers were improving, they concluded, but access to the drug still “has not diffused as widely as hoped when the treatment was first introduced.”

One strong factor appears to be state drug policies, the researchers found. Several states leave buprenorphine off their Medicaid payment plans; those states tend to have the lowest numbers of prescribing physicians. Another holdup: Most clinical guidelines for buprenorphine haven't been updated in more than a decade, leaving doctors with more questions than answers on such basics as proper dosing and length of treatment. RAND recently led an effort to develop new guidelines to remedy that. 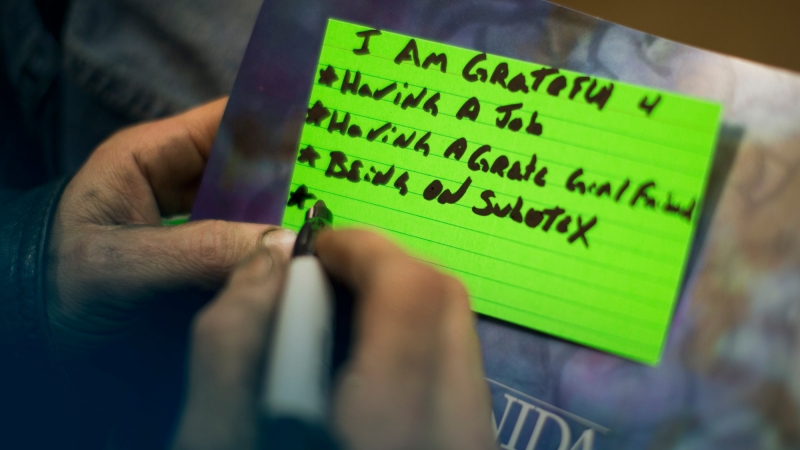 A patient recovering from drug addiction creates a list of things he's grateful for, including Subutex, a brand of buprenorphine

Buprenorphine has also made the transition from doctor's office to street corner. It's more of a novice's high; hardcore drug addicts often report little buzz from it, just a release from the cravings, body aches, and sweats of withdrawal. Nonetheless, illicit hits of buprenorphine helped send nearly 21,500 people to the emergency room in 2011, five times more than in 2006.

County jails have found papery strips of dissolvable buprenorphine tucked into love letters mailed to inmates; one Ohio jail had to start issuing its own underwear after discovering buprenorphine sewn into the seams of inmate t-shirts. The gunman who opened fire inside a historically black Charleston, South Carolina, church earlier this year had recently been arrested after police found strips of illicit buprenorphine in his jacket pocket; the FBI says that should have disqualified him from buying the gun.

“Buprenorphine can be used by an addict to get high. But that doesn't mean we throw out the baby with the bath water.”

“Clearly, it can be used by an addict to get high,” said Dr. Bradley D. Stein, a senior scientist at RAND with clinical experience treating addiction, who has led the research effort on buprenorphine. “But that doesn't mean we throw out the baby with the bath water. A tremendous number of medications have pros and cons.”

“For people who need it, for whom it's prescribed and used properly, it is an incredibly effective medication,” he added. “It can be a life changer.”

The Future of Buprenorphine Treatment

Surveys have found that as many as half of the roughly 30,000 U.S. physicians who have the federal waiver to prescribe buprenorphine never use it. Those who do are limited to treating up to 100 patients at a time; a congressional bill to lift that restriction in the hope of improving access to buprenorphine has been stalled in committee since last year.

The debate over the future of buprenorphine treatment has Congressman Tim Murphy, a psychologist by training, at one end: “I do not call this ‘treatment.' It is addiction maintenance.” And at the other, Dr. Daniel Bennett in Arkansas, whose family practice has a waiting list for buprenorphine treatment with more than 100 names on it: “I've seen people's lives saved, careers saved, marriages saved.”

And in the middle, people like Jamie H. She lives in small-town Maine, speaks with a voice as soft-edged as a whisper, and once spent a frenzied week smoking crystal meth. She asked that her full name not be used because of the stigma of addiction, which for her always orbited around prescription painkillers like Vicodin. She first found buprenorphine on the street; now, she pays $400 out of pocket for her monthly dose from a doctor who counts pills and tests urine to guard against abuse.

“It's made a world of difference, it really has,” she said. “Before, I would make sure that I had money for drugs before I had money for food. It's like I just dropped out of that world—which is wonderful.”

The poppies bloom in fields of brilliant red, pink, and white, giving the dusty badlands of southern Afghanistan their nickname: dasht-e-taryak. Desert of opium.

At least 90 percent of the world's opium comes from Afghanistan, where village economies can rise and fall with the sticky resin that farmers scrape from the poppy pods. In places scarred by a generation of war and grinding poverty, good poppy harvests are remembered as festival years.

Conventional wisdom says the international effort to stem the flow of Afghan opium faces impossible odds. Indeed, despite billions of dollars in global aid programs and eradication efforts, this past year saw more acres under poppy cultivation than ever before.

But a recent RAND report offers a glimpse at what may work. It surveyed years of international programs aimed not just at eradicating poppies, but also at strengthening the rural economy and improving the lives of Afghan farmers. The successes it found—programs that encourage more-traditional cash crops, for example, or make use of simple technologies—may hint at a way forward, given time. “Decades,” said Victoria A. Greenfield, a senior economist at RAND and the report's lead author.

“The economy has to look much better, in the long term, than it does today,” she added. 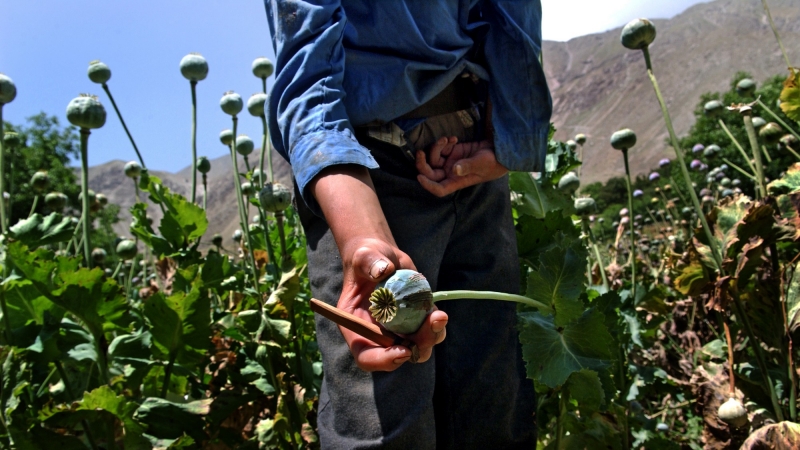 An opium poppy in Afghanistan

The opium from Afghan poppies seeps across well-traveled trade routes to feed the thriving drug markets of the Middle East, Europe, and Asia. The United States, however, gets most of its heroin from Mexico and Colombia.

As many as half of the families in rural parts of southern Afghanistan depend on the cash they make from poppies for at least some of their income. The opium they produce is compact and easy to store, and traders often come straight to their doors to collect it.

As many as half of the families in rural parts of southern Afghanistan depend on the cash they make from poppies for at least some of their income.

Opium poppies are so entwined with local economies in southern Afghanistan that shopkeepers, doctors, even barbers report seeing business boom when the crops come in. “Life improved with poppy,” one farmer told an Afghanistan-based survey team. In some places, the poppies—officially forbidden by Afghan law—are planted right up to the roadside like Midwest corn.

Efforts to combat those poppies face a catch-22, the RAND researchers concluded as they delved into the range of factors that pushed farmers to plant opium—and what might convince them to choose something else. Programs that made poppies less attractive for some farmers could make them more attractive for other farmers. A new road, for example, might make it easier for farmers to get alternative crops like grapes and pomegranates to market, but it also makes it that much easier for an opium middleman to make house calls at remote farms.

Even giving impoverished farmers better wheat seed could induce them to plant more poppy, the researchers found. More wheat means they may be less likely to go hungry, and can spare a little land for a cash crop like opium poppy.

“Few factors tilt in only one direction,” the researchers wrote. “That so many of the factors have indeterminate effects speaks to the challenges of designing successful counternarcotics programs.”

A Battle of Time

That underscores the central finding of the RAND report: It will take decades, not years, to elicit lasting reductions in opium poppy, and it will require changes far more fundamental than simply substituting crops.

Rural wages will need to increase several times over—through education, investment, and better job opportunities—to draw sharecroppers and field workers out of the opium business. Better education and opportunities for women would deprive labor-intensive poppy farms a vital source of unpaid labor. And any alternative crops will need access to stronger markets.

There are steps that can help along the way, the researchers found. One program doubled the yield of grapes—a traditional, high-value crop that can compete with opium poppy—just by teaching farmers to grow their vines on trellises, rather than leave them in the dirt. Another introduced simple hoop greenhouses, no electricity required, to allow farmers to grow winter vegetables for urban markets when they would otherwise plant poppies.

Such programs can help “shift the weight” against poppies, Greenfield said. But they're only a start.

This essay was also published in the Huffington Post on April 5, 2016.