The Surprising Ways That a Supermarket Changed a Food Desert 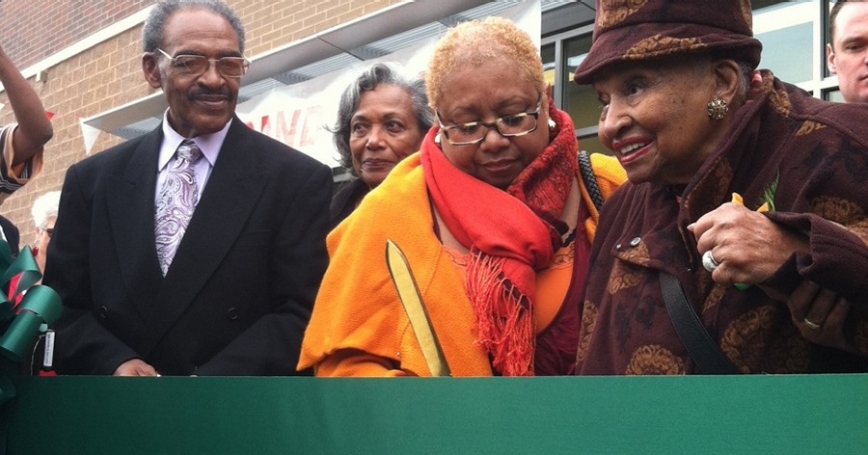 The opening of a supermarket in one battered Pittsburgh neighborhood gave RAND researchers an unprecedented opportunity to test—and, it turns out, upend—some core assumptions about food access and health in some of America's neediest communities.

More than 23 million Americans live in low-income neighborhoods more than a mile from any supermarket, so-called “food deserts” where chips and soda are easier to find than apples or oranges. A generation of public policy has linked such limited access to healthy food to a host of health problems, such as obesity and diabetes.

The community had spent years fighting to bring back a grocery as a matter of public health and social justice.

The federal government has spent half a billion dollars in recent years to entice markets and grocery stores into those food deserts. But the evidence that they improve diets or health outcomes was thin before RAND's years-long study of the impact one new supermarket had on one urban food-desert neighborhood.

The supermarket changed that neighborhood for the better, RAND found. But not quite the way anyone expected.

The neighborhood, known to residents as the Hill, had gone more than three decades without a supermarket of its own. Years of civic neglect and disastrous attempts at urban renewal had reduced thousands of its homes to vacant lots or parking lots. It was a place apart, a mostly poor, mostly black island severed from the rest of the city by a busy highway and the hill that gave the neighborhood its name. 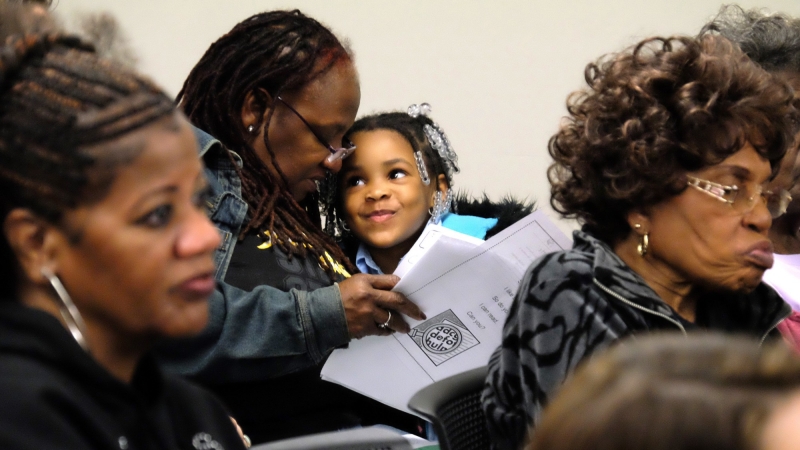 RAND researchers shared their findings in November 2015 during a community meeting in the Hill District that drew nearly 100 people.

It hadn't always been that way. The Hill once hummed with so much jazz and culture that a visiting Harlem Renaissance poet declared it the “crossroads of the world.” Its music halls drew the likes of Miles Davis and Duke Ellington; its Negro League baseball team starred a young Satchel Paige. Playwright August Wilson, eulogized in the New York Times as theater's “poet of black America,” introduced Broadway audiences to the characters he met growing up in the Hill.

“It's been beat up so much,” said Cheryl Hall-Russell, the president of the Hill House Association, a nonprofit community-service provider that partnered with RAND for the supermarket study. “It's a mix of pain and promise. If you're here, you can really feel that pain and promise, often in the same person.”

The Shop 'n Save supermarket that opened in late 2013 was unremarkable except for its address, on Centre Avenue in the commercial heart of the Hill District. It was a victory for the community, which had spent years fighting to bring back a grocery as a matter of public health and social justice. “This is our little garden of Eden,” one resident told the news crews who came for the grand opening. “Our paradise.”

The opening of the supermarket—with its chips and candy aisles, of course, but also fresh produce and a full dairy section—provided a unique opportunity for RAND researchers to track its impact on the neighborhood. They called their study PHRESH, for Pittsburgh Hill/Homewood Research on Eating, Shopping & Health. It followed more than 800 residents before and after the grand opening to see whether the arrival of the supermarket changed their health or habits. 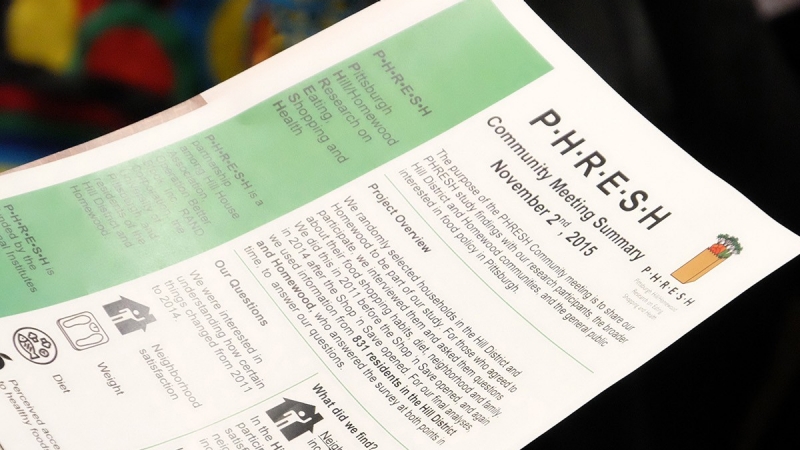 A summary of RAND's PHRESH study and its findings handed out during the community meeting.

The researchers found that people in the Hill District were not nearly so captive to neighborhood convenience stores before the supermarket opened as years of public policy had assumed. Most already shopped at a full-service grocery: They just had to drive or catch a bus to get there.

“You couldn't even get apples” close to home, said Phyllis D. Ghafoor, 61, a Hill District native and community leader. “Trying to build a meal out of a dollar store is torturous. Food desert is a good way to put it. You almost had to saddle up your camel to go the mile to get something.”

The arrival of the Shop 'n Save did deliver some obvious health benefits, the RAND study found. Neighborhood residents ate around 200 fewer calories a day, on average, after the supermarket opened. They also took in less added sugar and fewer empty or 'non-nutritious' calories from solid fats or alcohol. The overall quality of their diets stayed about the same, but that counted as a small success, since the diets in a nearly identical comparison neighborhood got worse.

But not everything worked as expected. Residents actually ate fewer fruits, vegetables, and whole grains after the supermarket opened. That may be because neither the new store nor any other market in the area paid any special attention to marketing healthier food, the researchers wrote.

The store improved not just the community's physical health, but its psychological health as well.

And there was an even bigger twist. The health benefits of the new store had nothing to do with whether people shopped there. The researchers found the same dietary changes in people who never set foot in the new store compared with those who used it every day.

“There was something that this grocery store did [to change] this neighborhood,” said Tamara Dubowitz, a senior policy researcher at RAND who led the study. “The mechanics may be difficult to explain and understand. But we saw that investing in this neighborhood caused positive change, and that's significant.”

What changed? The researchers found a likely answer in a survey question they had asked residents before and after the store opened: How satisfied are you with your neighborhood? About two-thirds of Hill District residents said they were happy with their neighborhood before the store opened. Afterward, the number shot to 80 percent.

The store, in other words—so long fought for—improved not just the community's physical health, but its psychological health as well. The fight itself also may have played a role, raising awareness of health and diet through the years of community meetings and rallies that brought the Shop 'n Save to the Hill. The end result was fundamental, a shift not just in diet but also in the community's perception of itself—“health in a much broader sense,” Dubowitz said.

The RAND study was by far the largest of its kind ever undertaken, and provided the first real evidence that the public-policy bet on supermarkets can pay off in food deserts like the Hill District. The return on those investments just isn't as simple or direct as once thought.

For residents of the Hill District, the opening of their first neighborhood supermarket in more than 30 years has come to represent a turning point. It coincided with a burst of new activity—a new community center just down the street, hundreds of new homes planned for construction. But it's the new supermarket that first greets people coming up the hill from downtown, a landmark symbol of progress in a community still fighting to reclaim some of its old jazz.

“It upgrades the community. You have the security of knowing that you have a store to go to,” said Bobbie Street, 68, a longtime Hill resident who, nonetheless, remains loyal to a Giant Eagle store across town. Still, she said, the new Shop 'n Save “is good for the neighborhood, it really is.”