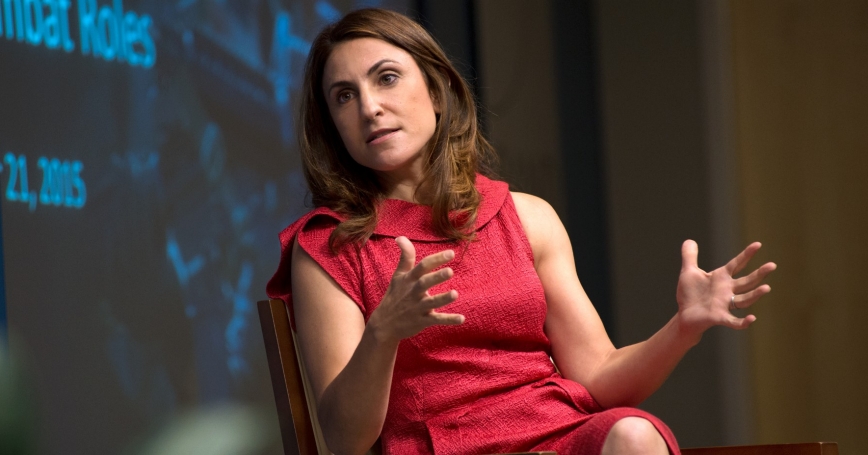 Gayle Tzemach Lemmon is a senior fellow at the Council on Foreign Relations; a contributor to Atlantic Media's Defense One; and author of the best-seller Ashley's War: The Untold Story of a Team of Women Soldiers on the Special Ops Battlefield. She spoke at RAND in 2015, just prior to the U.S. Secretary of Defense's decision to officially open all military occupations to women—including service in direct combat roles.

On How Recent Conflicts Changed the Role of Military Women

There was a security gap on the battlefield. In the most conservative and traditional parts of Afghanistan, where the insurgency was strongest, there was no way, culturally, that women were going to be able to talk to male soldiers. And you couldn't clear rooms that had women in them of weapons or explosives because you couldn't enter them. So Afghan women and everything they knew, everything they saw, everything they understood about their communities was being left behind and remained unknown.

Admiral [Eric T.] Olson, who was the first Navy SEAL to lead U.S. Special Operations Command, had a distinct view that we will never kill our way to the end of this war—what we will need is more knowledge. And if you want to get more knowledge, you want access to half the population. So this [opening of all military occupations to women] was never about a social program or political issue. It was always about purpose and patriotism and filling a security gap that was threatening the well-being and the mission of American soldiers in uniform—and the Afghans who were at that point transitioning to taking the lead in the Afghan war.

On “Being the Girl”

One woman, a military police officer, was on a ranger mission. Horrendous terrain. So steep that you'd be on hands and knees climbing up. Her legs were burning and [all she's thinking is,] “I cannot be the one who falls or breaks. Please, God, do not let it be the girl who falls. Because it won't just be me—it'll be all of us.” She felt this huge responsibility to all of these young women who were so ready and hungry to be out on these kinds of missions, and if she were to be the one, it would not be “a soldier fell out,” it would be “the girl fell out.”

On How We See Service Members

There's a story in North Carolina about a woman in the Air Force who parked in a veterans parking lot only to be scolded by somebody for taking a service member's spot. It's on all of us as a country to acknowledge what women have already been out there doing. Officially, the combat ban may have been in place, but the battlefield realities required their skill.

The missing story about women in uniform is valor. They've been out there for years with the American public barely noticing.

One study came out and people were shocked that the suicide rate among women service members was comparable to that of men. But in terms of what they've spent the last several years doing, these women have so much more in common with the men they were serving alongside than with the women in the civilian population. There is an enormous imagination gap, when it comes to imagining what a veteran is or what a hero is. I would tell people, “Oh, I'm doing a story on U.S. Special Operations.” And they'd say, “That's amazing!” … everybody had seen American Sniper and Lone Survivor. And then I'd say, “This story has women in it.” And their next question would be, “So is it about rape or PTSD?”

The missing story about women in uniform is valor. They've been out there for years with the American public barely noticing because they are a minority within a minority. I never set out to tell a story about women in uniform. I set out to tell a war story we hadn't heard about a group of Americans who answered a call to serve. But if I say, “Imagine a veteran,” my guess is, nine times out of ten, you don't see a woman.