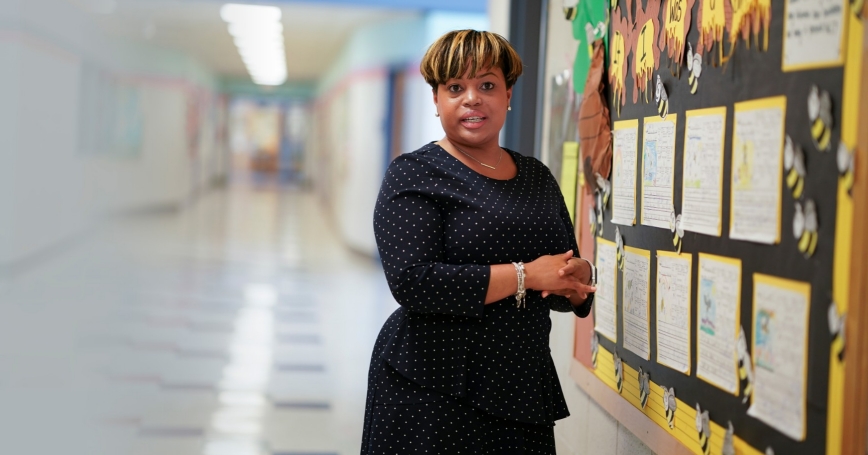 Jessica Coley, a principal-in-training in Prince George's County, Md., stands by some student project work in her school

It takes more than good teachers and textbooks to give students the education they deserve. A new RAND study shows just how important principals are, too.

Students in districts with carefully selected, prepared, and supported principals outperformed their peers by six percentage points on reading tests and nearly three points in math. Those are hard needles to move at the level of an entire district.

“We're not aware of any other districtwide initiatives with positive effects on student achievement of this magnitude,” said Susan Gates, a senior economist at RAND who led the study.

Jessica Coley arrives early, long before the doors of Samuel P. Massie Academy in suburban Maryland fly open and her 600 students pour through the halls. She likes to walk the building, looking at student projects pinned to the walls, paying special attention to the teacher comments. In a school where more than 80 percent of students don't meet state standards in reading or math, that has been a big push for her: making sure they get the feedback they need to improve.

“They know that I care,” said Coley, in her first year of a “resident principal” program that has her serve alongside a more experienced school leader. “And because they know that I care, they're willing to work extra hard to make me proud and to make their parents proud. Once you have that relationship, you can really start to see children making the right decisions and becoming invested in their academic progress.”

Studies have shown that hiring good principals is one of the most important things a district can do for its students, second only to hiring good teachers.

Studies have shown that hiring good principals is one of the most important things a district can do for its students, second only to hiring good teachers. Yet the process has too often been haphazard, a scramble to fill vacancies with whatever teachers have the right certificates and the most time in the classroom.

In 2011, the nonprofit Wallace Foundation decided to change that. It partnered with six large school districts to develop “principal pipelines” to cultivate and support up-and-coming principals. It backed their start-up efforts with up to $12.5 million each.

The idea was to make the districts more deliberate in how they selected, trained, placed, and supported new principals. They set new standards, provided more opportunities for mentorship and on-the-job training, and tracked candidates as they moved through the pipeline. One of the districts, for example—Prince George's County, Md., where Jessica Coley works—created what it calls baseball cards on its principal prospects, listing their key accomplishments and skills.

“Districts often haven't been this thoughtful about it,” Gates said. “In other sectors, I think people realize that just because you're a good doer, that doesn't mean you'll be a good manager of the doers. It's a different skill set. But in the education field, they hadn't really gotten to that.”

These six participating districts were all among the 50 largest school districts in the United States and had predominately minority student bodies. Each had demonstrated a commitment to school leadership improvement and had undertaken some pipeline efforts before.

Better Outcomes for Students and Schools

The Wallace Foundation brought in a team of researchers from RAND and Policy Studies Associates to evaluate the pipeline initiative. The researchers looked at data from more than 1,000 pipeline schools. Then they compared those schools with more than 6,000 others in the same states that also had new principals but were not part of the initiative.

That kind of progress is sometimes found in focused, classroom initiatives, like an intensive reading program, Gates said—but not in big, districtwide initiatives.

The study found that the pipelines had a positive and statistically meaningful impact on schools that needed it the most, those in the lowest quartile of student achievement. A more limited, exploratory analysis suggested the effects, while still positive, were somewhat smaller in schools with higher rates of poverty or students of color. And the overall averages masked some wide variations in district-by-district results. One of the districts underperformed its comparison schools in math, for example. On the other hand, one district outperformed its comparison schools by nearly 20 percentile points in reading.

The researchers also found that principals who went through the pipelines were nearly 8 percentage points more likely to stay at their schools for at least three years. That could be a significant money-saver; by some estimates, it can cost a district $75,000 every time it has to replace a principal.

A Promising Return on Investment

The findings add to a growing body of research that shows helping principals succeed can improve schools and raise student achievement. Another recent RAND study, for example, also found improvements in reading and math scores under a different principal initiative, the New Leaders Aspiring Principals program. Other studies have shown that schools led by high-quality principals tend to retain and recruit high-quality teachers, too.

“If you have a good leader, people will follow that leader,” said Richard Carranza, the chancellor of the New York City Department of Education, one of the districts in the pipeline initiative. “I mean, they'll travel across boroughs and pay tolls on bridges to go work in a school with a great leader.”

The costs of running a principal pipeline amounted to around one half of 1 percent of a district's budget, RAND's study found. Every one of the districts that participated in the initiative has continued to bring its principals up through the pipeline, long after the Wallace funding ran out.

Some now have a new problem: a surplus of highly qualified candidates coming through the pipeline, and not enough vacancies to place them. Some also worry that their rookie principals might be getting too much support, a “firehose” of instruction and advice. 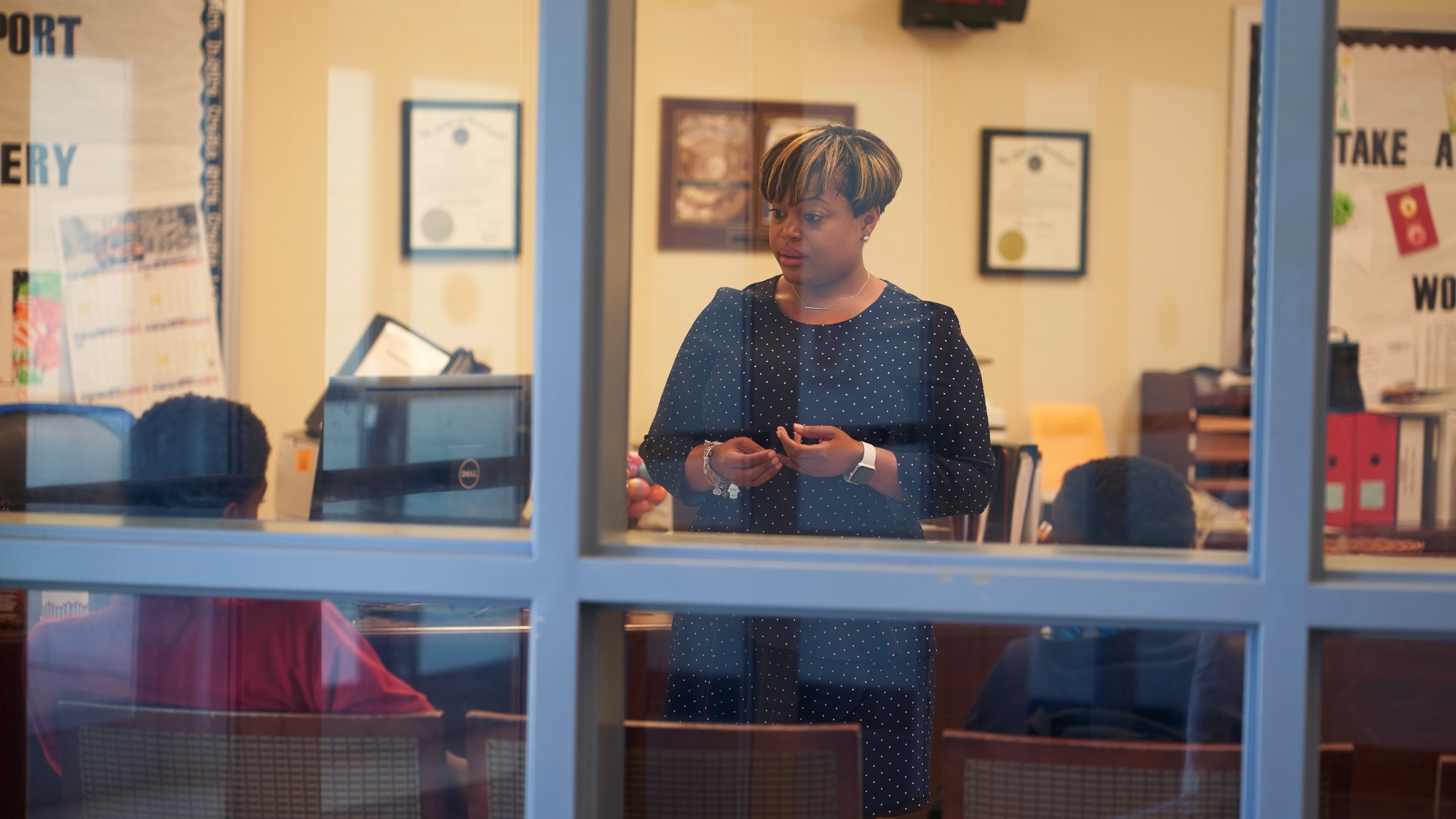 Jessica Coley will take it. As a resident principal, she might be monitoring the lunch room one minute, drawing up a budget the next, and sitting in a classroom as an instructional coach after that. Last year, when the district suddenly needed someone to register students and make classroom assignments just days before school started, she jumped in and did that, too.

“The principal position, it's one that sometimes people can think is about power. It can be glamorized,” she said. “I know that the responsibility is heavy. It's about moving a school, being able to move students and move teachers, in a way that we can see the progress that's being made.”

She's ready to do just that. She hopes to drop the “resident” from her title as early as this fall, and become a stand-alone school principal.