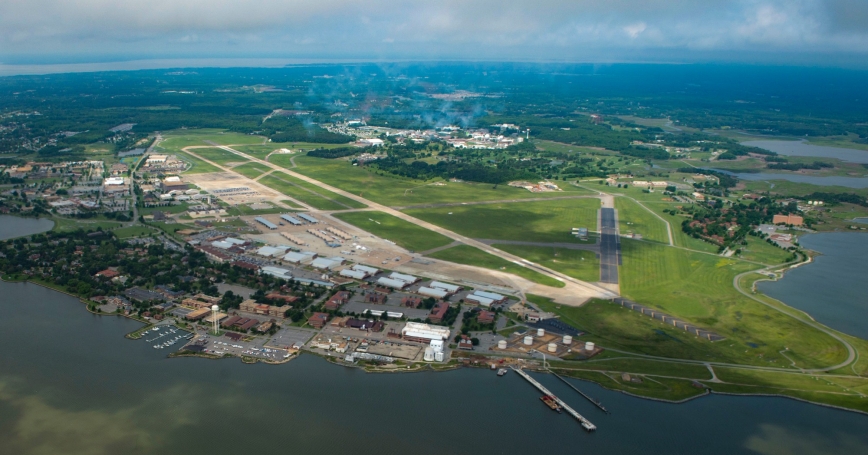 An aerial view of Joint Base Langley-Eustis and the Hampton Roads area, Virginia, May 20, 2018

The corner of Virginia known as Hampton Roads is home to more than 1.7 million people, a major port, and more military installations than anywhere else in America. So it's no small concern that the region is succumbing, inch by inch and year by year, to the Atlantic Ocean.

A new RAND report looks at how the community pulled together to prepare for rising sea levels, and the challenges it faced in working across civilian and military lines. It's a case study, with a note of caution, for other communities confronting the effects of climate change.

“Collaboration is difficult,” said Maria McCollester, an associate political scientist at RAND who led the study. “You think, 'This will be helpful; it should be a no-brainer.' But as we dug into it more, we realized how much effort it takes to collaborate, and how much you need to be able to put into it.”

Hampton Roads embraces one of the largest natural harbors in the world and has been a center of military activity since the 1600s. It gave its name to the famous first duel of ironclad warships during the Civil War, the Battle of Hampton Roads. Today, it hosts the largest naval station in the world, most of America's F-22 fighters, and more than 80,000 active-duty U.S. service members.

And it is steadily losing ground. Sea levels around Hampton Roads are now one to two feet higher than they were a century ago. Floods have become a part of life in some coastal neighborhoods; as one local complained to a reporter, residents have had to get their brakes changed because of all the salt water in them. Climate models suggest the sea level could rise by another 1.6 to 7.5 feet by the end of the century.

In 2014, the federal government launched the Hampton Roads Sea Level Rise Preparedness and Resilience Intergovernmental Pilot Project—better known as the IPP. Its purpose was to bring together civilian and military officials to plan for a future of rising water and worsening floods. The ocean won't stop at a base perimeter or city line, the thinking went—so neither should the planning effort.

For the next two years, city leaders and state planners, Air Force colonels and Navy commanders did something that doesn't come easy in government: They worked across their own jurisdictional boundaries. They looked at how rising sea levels could endanger roads, bridges, schools, businesses, and public health. And they did it on their own time.

To be effective, communities need to agree up front on the magnitude of the problem they're trying to solve, and what they're willing to do to solve it.

It wasn't easy. Security concerns prevented the military from sharing such basic information as what roads it needed to stay open. Officers sometimes transferred out of the area mid-project. Local governments used different scenarios of sea-level rise in their individual plans, making it difficult to agree on a single scenario, or set of scenarios, to plan for collectively. And a working group set up to consider future land use planning, the usual domain of local governments, disbanded halfway through the project.

Those challenges—even more than the successes—provide a good guide for other communities, RAND researchers found. That's especially true when it comes to working across civilian-military lines. “While collaborative planning is unobjectionable to promote,” they wrote, “it is surprisingly difficult to do and even more difficult to do well.”

To be effective, communities need to agree up front on the magnitude of the problem they're trying to solve, and what they're willing to do to solve it. They need institutional buy-in, so that the commitment doesn't end when an officer transfers or a local politician leaves office. They need to think through why they need a collaborative approach, and how they plan to make it work. A steady source of funding would help.

Big, collaborative approaches to a problem like climate change also need a center of gravity, the researchers concluded—a regional entity that can pull everyone together and oversee the different parts of the project. One of the best features of the Hampton Roads IPP, they found, was its use of Old Dominion University as an “impartial convener.” It provided a neutral location for meetings and prevented any one participant from having a greater voice in the project than others.

In their interviews with civilian and military participants in the IPP, the researchers found not a single person who thought the monthly meetings and daylong workshops were not worth the effort. It helped change the conversation in Hampton Roads and, despite the challenges, brought neighbors together for their own mutual defense. Last year, the Navy and the cities of Norfolk and Virginia Beach released a joint report that looked at steps needed to protect schools, roads, a hospital, and Naval Station Norfolk from the encroaching water.

“The way that we've done things in the past might not be enough in the future as we face more complex challenges,” McCollester said. “If I'm a city manager or I'm working in a military installation, I'm going to have to interact with people outside of my organization to plan for those challenges. It's difficult. But just something as simple as having meetings with other people can open you up to other ways of thinking about things.”

The need for that break-down-the-barriers approach is already apparent in military communities nationwide. Most military installations depend on their civilian neighbors to ensure the power stays on, the water is safe, and their employees can get to work. In a recent survey of more than 3,500 U.S. installations, half said they were already experiencing droughts, floods, extreme heat, and other effects of climate change.

Funding for this research was provided by the generous contributions of the RAND Center for Global Risk and Security Advisory Board. Support was also provided, in part, by the fees earned on client-funded research.