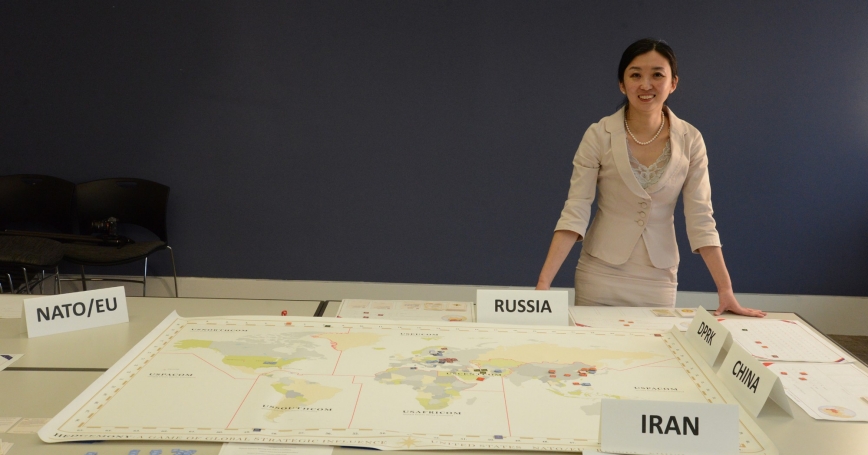 The Serious Side of Gaming: Q&A with Yuna Wong

Policy researcher Yuna Wong is serious about games. Recently named codirector of the Center for Gaming, she has designed and run wargames to study national defense policy, Marine Corps operations, and the dangers of putting too much trust in artificial intelligence. She wrote her Ph.D. dissertation at the Pardee RAND Graduate School on how to better model the behaviors of noncombatants when simulating urban military operations.

She didn't expect to make gaming a focus of her career. She studied political science, then worked as an operations research analyst for the Marines. She was at a conference when she saw what she describes as BOGGSATs—a Bunch of Guys and Gals Sitting Around Tables —playing a wargame. “They were a particular type of geek that I felt very comfortable with,” she says.

What was it that made you decide to focus on gaming?

It was the whole idea of living out a story and really surfacing different perceptions people can have. It was so different from a study or experts expounding on some topic in a static and impersonal way. With games, you can get experts shouting at each other. It was just fascinating to me, the human drama.

You recently looked at deterrence and artificial intelligence. Walk me through that game.

We had a future scenario where China was the dominant power in the region; the United States, Japan, and South Korea were all trying to balance against it; and everyone had autonomous systems and artificial intelligence. We asked the question, If you make decisions at machine speeds, can things escalate at machine speeds?

Did any moments stand out as the game unfolded?

We had speculated that maybe you could get a world where only robots destroy each other and nobody even cares or notices. But our game escalated to the point that there were human casualties. The first time humans were killed, that really raised the temperature. It was a different game after that.

Did you come away with any insights that you wouldn't have otherwise?

In our scenario, the machines escalated in ways that humans didn't expect and couldn't manage. We really need to think about that as we develop these systems and concepts. The United States and China both seem very committed to investing in artificial intelligence and autonomous systems, but we need to ask whether some of those systems are inherently more escalatory. We need to avoid a future where the first time we're asking those questions is after we've fielded these systems and we're in a crisis.

You also have a board game named Hedgemony coming out soon.

A good game really surfaces questions about what just happened and leads you to insights that you hadn't thought of.

It's a version of the game that we developed for the Pentagon that supported the 2018 National Defense Strategy. We thought a commercial, boxed version could help inform people who are trying to think strategically—graduate students, War College staff and students, people in the services. You play the Department of Defense and you make different choices about posture and modernization, force structure. Other players can be China, Russia, Iran, and North Korea. How do you balance your resources when you have living adversaries who are also trying to think about the strategies they want to pursue?

It sounds like the market would be professionals, not necessarily families playing on a Sunday afternoon?

Right—although we don't want to underestimate some families.

So what makes a good game?

It's got to be easy for participants to be active, to really get immersed in the game. A good game really surfaces questions about what just happened and leads you to insights that you hadn't thought of. Thomas Schelling, the famous RAND wargamer and Nobel laureate, once said no matter how intelligent people are, they can't make a list of the things that had not occurred to them. That's what games can be good for.

Do you have a favorite board game?

Quartermaster General, a World War II game. I really appreciate how elegant that game is in recreating some of the dynamics of World War II—not just the forces, but the geopolitical logic and some of the choices those countries had to make. Having done something like Hedgemony, creating a game of strategy for the entire world, I really appreciate how well that one is done.