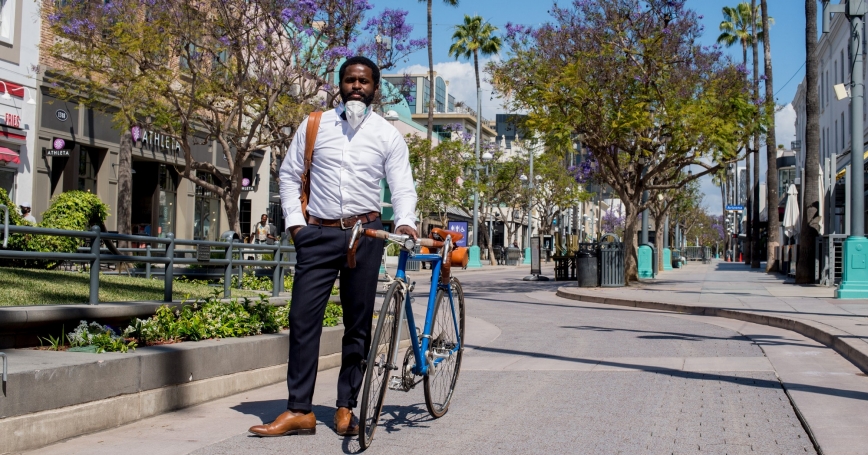 Jonathan Welburn has spent years studying how economic shocks ripple outward, from one company to another, like a contagion moving through the economy. As COVID-19 infections surged, jobs vanished, and companies shut down, his research helped underscore the economic costs of the crisis, and the grim choices facing policymakers.

He and a team of researchers from across RAND developed an online tool that shows what the future might look like under different physical-distancing scenarios. The tool provides a state-by-state look at how COVID-19 caseloads, fatalities, and hospital demand on one hand, and state gross income on the other, change over time as policymakers relax or stiffen the rules. It shows how deeply the crisis is cutting into state economies—but also the deadly cost of reopening too early.

Welburn, an operations researcher at RAND, has been working to model and manage economic risk since the last big economic shock, the Great Recession. The online tool can give policymakers a starting point, he said, as they confront challenges with no real precedent.

“Putting physical-distancing policies in place was the easy decision,” he said. “Taking them off is not.”

How do you hope policymakers use the COVID-19 Decision Support Tool?

The tool can help them navigate how they should be dialing up and dialing down physical-distancing policies and managing the trade-offs. It runs those policies through an epidemiological model to show how the spread of disease changes as a function of time and of what policies are in place. Then it uses an economic model that says, Here are the economic losses associated with those policies. We wanted to put those trade-offs in one place. As you put in place measures that are more strict, that obviously pulls down the case count, but the tool also lets you understand the economic costs.

We have a health crisis, we have an economic crisis, and together they're creating a national well-being crisis. Flattening the curve and not overwhelming the health system is something we've all really accepted, and this tool sheds light on different policies to do that. But we also have to try not to overwhelm the economic system. We're trying to balance these two absolutely catastrophic and simultaneous crises. The idea here is to help policymakers loosen physical-distancing measures as the crisis evolves, but also to help them reinstate such measures should cases tick up.

We have a health crisis, we have an economic crisis, and together they're creating a national well-being crisis.

Were there any surprises when you started running the numbers?

The variance in state losses is really stark. Some of the Midwestern states, just by the nature of their economies, have some of the largest economic losses due to physical-distancing policies. Indiana, Iowa, and Wisconsin especially had really significant losses. They produce a lot of final goods—finished products from, say, an assembly line—and the physical-distancing policies directly reduce demand for those.

You've done a lot of work on systemic risk in the economy. How did that factor into this crisis?

Before the crisis, we had come up with a way to model the economy at the level of individual firms. Once we did that, we were better able to see how truly and heavily interconnected the economy is.

In other words, some businesses are so central that when they get hit, the losses ripple through supply chains and spread through the economy. Since 2008, everybody has been looking at the financial sector, worried that a crisis there could spread and take down the world economy again. But we found that tech and telecom companies have become increasingly central to the economy. So have some manufacturing companies and insurance companies. We used to say that some banks are too big to fail, but it's become clear that there are many firms that are now too interconnected to fail.

What does that tell you about recovering from this crisis?

I'm mostly concerned about whether or not some of those firms that are too interconnected to fail, fail. But moving forward, there could be an upside that might play a role in the recovery as well. Some of these companies that are really central to the economy are the ones people are relying on to get through this. Many of the digital services we're using—from Zoom to Slack to Netflix—rely on Amazon Web Services. Certainly, there are systemic risks associated with firms like Amazon that are so central to economic activity. But in this unique crisis, they may also bring benefits in lifting up all of the firms that touch them.

The potential debt crisis. Many firms were highly indebted coming into this crisis—retail, oil and gas companies—and some of them are also very central to the economy, very interconnected. Those are pockets of very high risk. Corporate debt levels are very high; municipal debt levels are very high; federal levels are very high—not just in this country, but across the whole world. It will be a struggle for policymakers to figure out how we de-leverage moving forward. That could be a real constraint on growth. We need to find novel solutions, to figure out how to fix the problem in a nonchaotic and equitable way. That's the next project I'm working on.

Funding for The Health and Economic Impacts of Nonpharmaceutical Interventions to Address COVID-19 and Systemic Risk in the Broad Economy was provided by gifts from RAND supporters and income from operations.