A Voice for Veterans on Capitol Hill: Q&A with Terri Tanielian 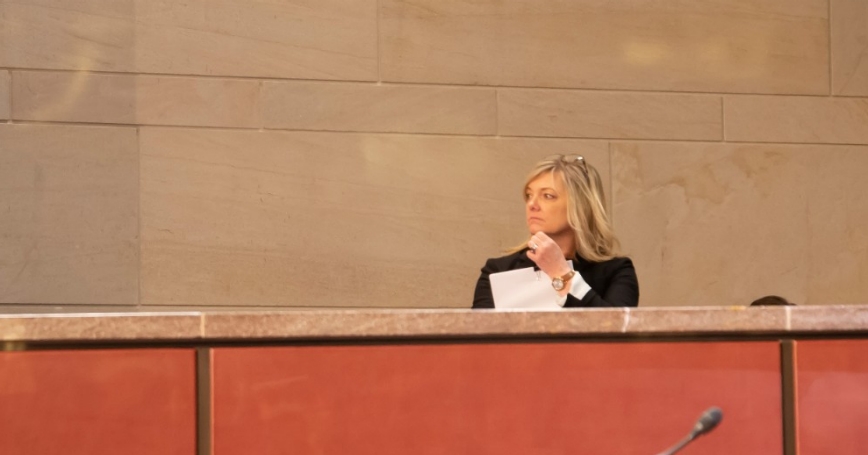 Terri Tanielian waits for a House Committee on Veterans' Affairs hearing to begin in the U.S. Capitol Visitor Center

Terri Tanielian's research has helped bring posttraumatic stress disorder and other “invisible wounds” of war out of the shadows. It has helped get military caregivers the support they so desperately need. And it has shown how the American health care system too often fails veterans, especially those in suicidal distress.

Tanielian is a senior behavioral scientist at RAND, an internationally recognized expert on military and veteran health, and a frequent witness at congressional hearings. Earlier this year, she completed an assignment that allowed her to more directly inform good policy. She embedded full-time with the House Committee on Veterans' Affairs as a six-month fellow.

She was there to provide nonpartisan support to the committee, to help it pursue policy ideas backed by evidence. She worked with staff to help inform the committee's agenda for the current congressional session, including the chairman's signature legislative proposal, the ACCESS Act. It would ensure all veterans get access to mental health care, regardless of their discharge status.

RAND funded the fellowship as a pilot project, with the help of philanthropic support, and is considering whether to expand the fellowship to more congressional committees, and more fields of research expertise, in the future.

How did this fellowship opportunity come about?

I had testified in May 2019 about some of RAND's research and analysis on suicide prevention for veterans and service members. I was in the audience for another hearing on suicide prevention, and a member of the House Veterans' Affairs Committee approached me. She said, “I saw your testimony. Our chair has actually made suicide his No. 1 priority for this session of Congress, and we're thinking of bringing in a fellow. Would you be interested?” So we teamed up with RAND's Congressional Relations team and RAND leadership to figure out how we could make something like this work.

What were you hoping to accomplish?

The original intent was to produce a report for the committee, with a framework and some recommendations for how it could consider evidence-based policy solutions. But the committee members and staff wanted to move more quickly. So I became very much involved in crafting a strategy for the committee, producing real-time guidance and educating the members.

How did that impact the committee's work?

I outlined what committee staff should be doing to gather more information, what policy solutions they should be considering based on the evidence. When I drafted the framework, the staff said, “This is excellent. We need to brief the chairman”—who quickly said, “We're going with it!” The committee sent out a press release about how the committee's activities would be organized around this framework and its commitment to push forward with comprehensive suicide prevention legislation.

Do any moments really stand out to you?

We need to lean further in if we're going to make strides in reducing the number of suicide deaths among veterans.

I helped name the Veterans' Acute Crisis Care for Emergent Suicide Symptoms—or ACCESS—Act, one of the main pieces of legislation the chairman introduced. I then went with staff to drop it in the “hopper” for new legislation in the U.S. Capitol. That was a memorable “pinch-me” moment. I also got to sit behind the members and write questions that hearing witnesses would have to answer. I was really humbled by the seriousness and the passion that the members of the committee and staff had for this topic, and their willingness to listen to what I could share about what would work, what the evidence says.

What happened with the legislation you worked on?

COVID hit during my fellowship, and that really slowed things down. The intent had been to push forward quickly on these bills on a bipartisan basis. But then work stopped for a couple of weeks, and when it resumed, the focus was really on the VA's role in response to the pandemic. The committee had a hearing in September 2020 to get formal feedback and discussion on the ACCESS Act, as well as 30 other pieces of legislation, all of them focused on suicide prevention and mental health.

What are you working on now that you're back at RAND?

I'm trying to get some more work off the ground around helping military caregivers. I've also been looking at how we can deepen and expand our work on reducing veteran suicide risk.

Has your fellowship experience inspired any of that work?

I'd say I'm emboldened by it, more greatly impassioned that we need to lean further in if we're going to make strides in reducing the number of suicide deaths. I've been doing mental health research for 25-plus years, but now I'm thinking about how we could be working in more interdisciplinary ways—not just through the lens of “get more people into mental health care.” We need to think about it through the lens of ending discrimination, promoting economic opportunities and access to health care, enacting smart gun policies. All of those things are essential components of comprehensive suicide prevention. So I want to make sure I'm focusing on research that's really going to propel those policy solutions.