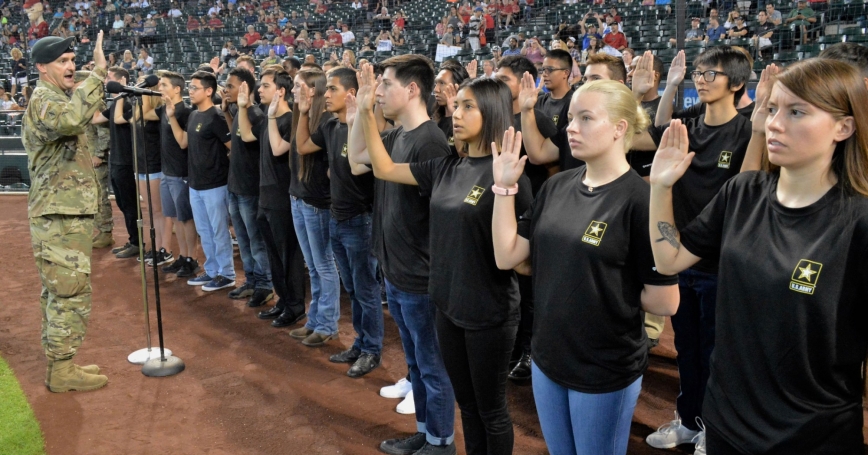 Recruits who make it into the U.S. Army despite low-level histories of marijuana use perform no worse, overall, than other soldiers. That should be welcome news in recruiting offices nationwide. More than half of all new recruits come from states where marijuana is now legal, at least for medicinal use.

The Army's rules have not changed. Marijuana use is still a disqualifying offense for anyone hoping to join up. But those who have left it in the past can ask for a waiver, just like recruits who have diabetes, chronic insomnia, or bunions on their feet. Researchers at RAND wanted to know, How do those waivered recruits actually perform once they get into uniform?

They looked at thousands of soldiers who enlisted despite past marijuana use and other disqualifying marks on their records, such as depression or anxiety disorders. They found no evidence that those recruits were riskier across the board than any others. The Army could tighten up its policy on waivers, they concluded—but, for the most part, it works.

“When people hear 'waivers,' they sometimes think the Army is letting people in who really shouldn't be there,” said Michael Hansen, the associate director of RAND Arroyo Center, the Army's sole federally funded research and development center for studies and analysis. “The strongest message of our report is that using waivers has nothing to do with changing quality standards.”

Without waivers, a failed drug test for marijuana would block the one-third of American 18-year-olds who say they have used marijuana at least once in the past year.

When waivers make the news, they're often portrayed as free passes handed out by an Army desperate to fill its ranks with anyone it can get. “Smoked pot? Want to go to war? No problem,” one news story quipped. Policymakers have worried that waivers will weaken the armed forces; studies have found that even fellow soldiers think waivered recruits are of lower quality.

But to get a waiver, recruits have to convince the Army that they're a good bet to succeed despite whatever checked box has held them up. That means more scrutiny, not less—a review process that often takes months to complete.

Without waivers, people with even mild depression or anxiety disorders—several million Americans between the ages of 18 and 25—could not join the Army. Nor could anyone treated as a teenager for attention-deficit/hyperactivity disorder (ADHD), which affects nearly 10 percent of children. A failed drug test for marijuana, or a single conviction for possession, would also screen people out. That would block the roughly one-third of American 18-year-olds who say they have used marijuana at least once in the past year.

Researchers looked at data from every recruit who joined the regular Army between 2001 and 2012. They could see which of those recruits needed waivers; they could also search the data for specific references to marijuana or behavioral health problems. Then they pulled in personnel records to see how those recruits performed through their first term in the Army.

They found that around 15 percent of recruits needed some kind of waiver to get in, most often for health reasons. Fewer than 1 percent had a history of marijuana use or possession, depression, anxiety, or ADHD. As a group, those recruits were not across-the-board riskier than any other recruits. By one key measure, reenlistment, they performed almost exactly the same.

When waivered recruits did get into trouble, it was often because of what they had been waivered for in the first place. Recruits who came in with a misdemeanor history of marijuana possession were somewhat more likely to go out on a drug charge. Recruits with a history of depression were more likely to get red-flagged for psychiatric limitations.

But those same recruits tended to perform better than average in other areas, often balancing out the negatives. Recruits with a history of marijuana were just as likely as other recruits to complete their first term and make sergeant, and they were less likely to leave the Army for health or performance reasons. Recruits with a history of ADHD were more likely to have health problems in the Army, but less likely to get court-martialed.

Recruits with a history of marijuana were just as likely as other recruits to complete their first term and make sergeant, and they were less likely to leave the Army for health or performance reasons.

“This is really an open area for more thinking about the military's approach to people with these issues in their backgrounds,” said Beth Asch, a senior economist at RAND who specializes in military recruiting and led the project. “It's gratifying that we can now start bringing to bear some analysis on a topic that needs much more investigation.”

RAND's study was the first to use the gigabytes of data the Army collects as it works through waiver requests, providing an unprecedented look at how waivered recruits perform across outcomes. It identified three recruit characteristics that seemed to protect against bad outcomes. Recruits who were older, scored higher on aptitude tests, and had at least a high school diploma did better on almost every outcome. Older recruits with a history of marijuana use, for example, were less likely than average to get kicked out for misconduct.

The Army has made good use of waivers to bring in well-qualified recruits who otherwise could not join, the researchers concluded. Even if the share of recruits who need waivers were to increase 100 times over, RAND's models predicted only small changes in the overall performance of any given accession cohort. But the Army could be more deliberate about using waivers to bring in recruits with the highest chances to succeed—those who are older, better educated, with higher aptitude scores.

In fact, one of the major findings in RAND's report has nothing to do with recruit quality. Where the Army really needs to improve is in how it talks about waivers to policymakers and the press. As social standards change—around marijuana use or mental health care, for example—the Army should do more to demonstrate that waivered recruits are not necessarily worse recruits.