A Tradition of Service: Q&A with Two Veterans 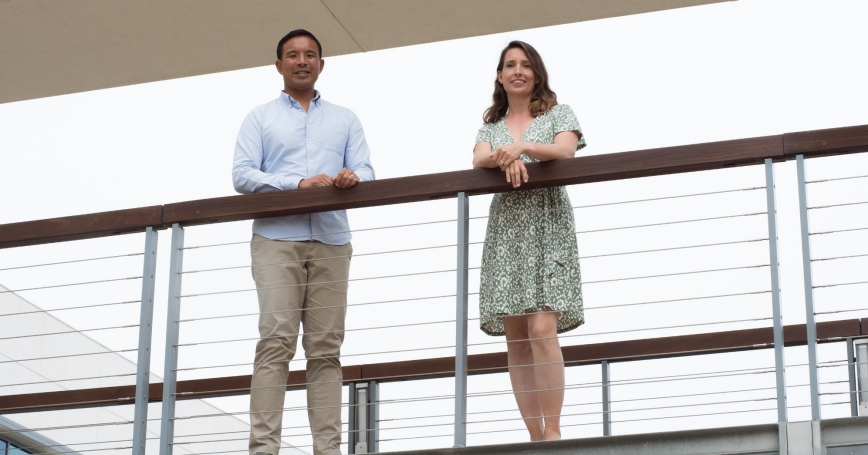 Jonathan Wong was about to graduate from boot camp as a U.S. Marine on the morning of Sept. 11, 2001. Joslyn Fleming was a midshipman at the U.S. Naval Academy.

In the years that followed, Wong deployed twice to Iraq—first as a reservist sent in with the initial invasion, later as an officer—and served another tour on a ship off Japan. Fleming also landed in Iraq with the Marines, where she led combat resupply missions, then served in Africa on the ship that rescued Richard Phillips, the captured mariner better known as Captain Phillips. She's now a lieutenant colonel in the Marine Corps Reserves.

Both later came to Washington, D.C.—Fleming as a legislative aide for the Marines, Wong as a workforce planner—and both came to see policy work as another way to serve. Fleming joined RAND as a defense policy researcher in 2014. That same year, Wong arrived as a student at the Pardee RAND Graduate School. He now also works as a researcher at RAND with a focus on defense policy.

What made you want to join the Marines?

Joslyn Fleming: I come from a long history of military service in my family. Both of my grandfathers retired as Navy captains; my dad retired as a Marine Corps colonel. So service has always been something that's very important in our family, and it just called to me.

Jonathan Wong: My dad's side of the family came to the United States in the 1950s, after China fell to the communists. My grandfather had been in the Chinese army and had worked with a lot of Americans. He came to Santa Monica and opened a restaurant; my father's generation had average, American, white-collar jobs. The country treated my family so well, and I wanted to give back—and, much like Joslyn, I thought military service was the way to do it.

So what inspired you to become a researcher? 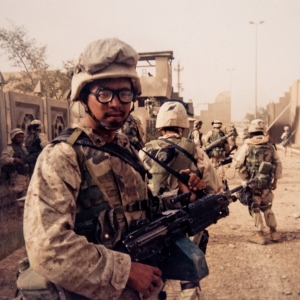 Wong: There were a few experiences I had that made me start to ask deeper questions, the kinds of questions that RAND works on. One was seeing the debate over weapons of mass destruction in Iraq go so sideways. In my first deployment, it was just a fact that we would be attacked with chemical weapons. We got an alert one time, and as I was pulling on my gas mask, I kept thinking, 'Yeah, there's a decent chance that I'm going to die a pretty miserable death in the next 30 minutes.' We all know now that wasn't the case.

And then, in my last tour in Iraq, I kept seeing all this equipment just being thrown into burn pits or crushed and destroyed. It cost less to destroy it in place than to send it home. This is hundreds of millions of dollars of equipment. I was really disquieted by that, by the amount of money that we were just torching in Iraq. I wanted to know whether there were better answers.

I saw these problems that the Marines were experiencing—that I experienced—and I saw RAND as a bridge between them and policymakers on Capitol Hill.

Fleming: I was working for the Marines on Capitol Hill, and my questions were similar to those that Jon referenced. I saw these problems that the Marines were experiencing—that I experienced—and I saw RAND as a bridge between them and the policymakers on Capitol Hill. I saw an opportunity to broaden my ability to take care of Marines and soldiers and sailors and airmen.

How has your military experience guided the work you do at RAND?

Fleming: I specialize in military logistics, but I always try to take on one or two projects that will have a direct impact on the lives of individual service members. I worked on a project to improve VA health care, and it just felt great to know we were really helping people. I had another project looking at what to do about ballistic glass that was delaminating from the windshields of military vehicles. I once had a driver at Camp Pendleton who had to look out the side window because he couldn't see through the windshield.

Wong: Some of the work I do now is assessing strategies the military is considering—so, for example, What might an armed conflict with China look like? I was one of those young Marines who is going to be implementing these things, so I have this very visceral sense that some poor lieutenant at the end of all this is going to have to put it all together and make it work. We have to do our best work up-front to give him or her the best chance of coming home alive. That really drives the work I do here.

Fleming: That's a great point, Jon. Marines like to say, once a Marine, always a Marine. I still feel this overwhelming commitment to get it right for those Marines and other service members, to always remember whom these policies are going to impact.

Do you have any examples where your experience is making a difference?

We have to do our best work up-front to give [service members] the best chance of coming home alive. That really drives the work I do here.

Wong: We did a study several years ago helping the Marines think through how they could integrate women into infantry units. A question came up: How would we know if it was working? There were no data, no metrics, that really captured that. I had served at every rank in those infantry units, from private to corporal; I had led them as a lieutenant. And so one particular metric I suggested was whether women were chosen to be fire team leaders. That's a very junior position; it isn't tracked on any kind of formal records. But it's a first indicator that this person is valued, this person is considered worthy of leadership. I think it signaled to the Marine Corps leadership that, hey, there's someone on this research team that knows what they're talking about.

Fleming: When I first got here, we were doing a study to help Marines in combat arms specialties—infantry, artillery—translate what they do onto a resume, to help them get post-service jobs. They brought me in, this brand-new analyst, because I could 'speak Marine.' There were just these very specific phraseologies that the Marines would use that they were trying to get across, and it was frustrating to them to not be understood.

Wong: Joslyn and I are coleading a project examining the Long Range Precision Fires program, which is the Army's big-ticket program. It's the same motivation: Looking at things and asking, 'Is this really going to work?'

We've talked about how our experiences drive us to help others in uniform or veterans, but I really also try to extend that to people more broadly. We do a lot of defense-related work at RAND, but we do a lot of other things as well. One of the things I've been thinking a lot about is how to connect the motivation I have, the skills I have, to other populations and groups. For instance, I volunteer at a nonprofit preschool. My kids are finishing up there, so it won't affect me going forward, but I see a line between that motivation to help others and volunteering at a preschool. 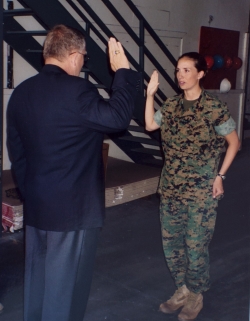 Fleming: I just finished a project with one of our other Marine Corps colleagues, Jeannette Haynie. We were looking at the Marine Corps' body composition requirements, and whether they can drive people toward disordered eating behaviors. I remember what it felt like to have to go stand in line at the scale.

There's a motto over the Naval Academy chapel, non sibi sed patriae, “not for self, but for country.” It's kind of the motto I try to live by. It's why I joined the service, it's why I continue to serve in the Reserves, and it's why I came here to RAND. If I had a little Post-it note above my computer, it would read, 'How does this impact the individual service member, and how can we make it better?'