The Lives of Veterans Experiencing Homelessness 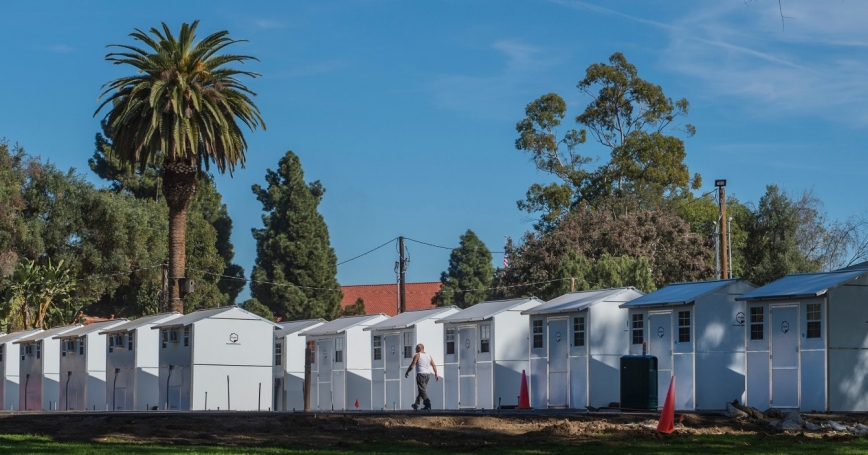 Jocelyn joined the U.S. Army with dreams of putting herself through college and becoming a lawyer. It's been a long and bitter journey from there to the streets of Los Angeles, where she scratches out a living selling handicrafts on the Venice Beach boardwalk. The closest thing she has to a bed at night is the front seat of a broken-down Mercury Mountaineer.

The United States pledged more than a decade ago to end veteran homelessness. “Those who have served this nation,” Secretary of Veterans Affairs Eric Shinseki said at the time, “should never find themselves on the streets, living without care and without hope.” The numbers have fallen by nearly half since then—but the latest count still found more than 37,000 veterans living in their cars, in temporary shelters, or in makeshift camps.

Researchers followed 26 of them for one year to see how they live and what keeps them on the streets. Their study provides a window into what it means to experience homelessness in the middle of a global pandemic. It found missed opportunities and needless barriers to helping veterans in need, all of it summed up in one glaring statistic. Of the 26 veterans in the study, only three managed to find a permanent place to live.

Jocelyn could feel that struggle in her bones. She had spent years living on the streets, and she was ready for a break to go her way. She was tired.

“The way people treat you when you're homeless gets exhausting,” she said. Her name has been changed to protect her identity. “It's like you're not a human being anymore. That's the worst part about being homeless. It's mentally, emotionally, and spiritually degrading. Everybody wants to spit on you when you're down.”

The latest count found more than 37,000 veterans living in their cars, in temporary shelters, or in makeshift camps.

Sarah Hunter lives not far from one of the largest VA centers in America, a sprawling campus set aside more than 100 years ago for needy veterans. She would bike past it and see the cluster of tents that locals called Veterans Row, spread across the sidewalk just outside the main gates. If there was a place that could symbolize America's broken promise to its veterans, Veterans Row was it.

Hunter directs the RAND Center on Housing and Homelessness in Los Angeles. She wrote out a proposal and teamed up with researchers from the University of Southern California to make it happen. For one year, they would follow veterans trying to survive on the streets of Los Angeles, checking in at least once a month to see how they were doing, where they were sleeping, and what they needed to get by. The Daniel Epstein Family Foundation funded the project with a $1 million gift.

Hunter and other researchers recruited veterans for the study at city parks and libraries, at food lines and VA outreach events, and outside the flag-draped tents of Veterans Row. They walked up and down the Venice Beach boardwalk as well—where they could have seen Jocelyn hustling for food money. A former Army clerk, she had fled a series of abusive relationships, moving from city to city, from a friend's couch to a church basement to the streets, never quite getting her feet back under her. Now she was selling poems she had burned into pieces of wood with sunlight through a magnifying glass:

Look into my mirror. What do you see? Do you see the person you wanted to be? Are you happy with the you, you are right now; or could you change your life somehow?

We can all improve some facet of ourselves. If it was worth it, only time will tell. Look into my mirror, and all will be well.

She had received an honorable discharge from the military—as had two-thirds of the veterans in RAND's study. That made them eligible for an array of health care, housing, and employment services. But some didn't know how to access those benefits, and others had given up trying. Community outreach workers who could help connect them to services were too often overworked and under-resourced, bailing out a ship that was already underwater. 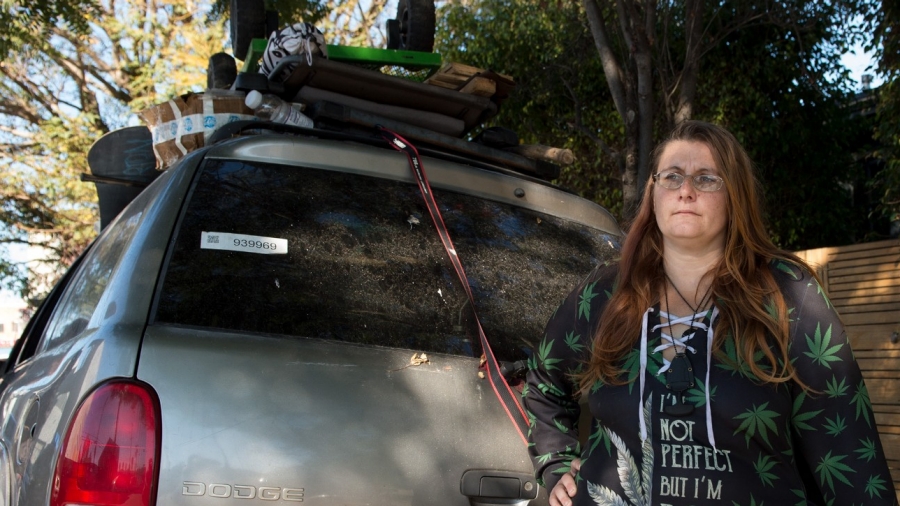 "Jocelyn," an Army veteran, stands by the car she uses as her home in Venice, California, January 2022

Most of the veterans in the study said finding a place to live was one of their top life goals. But housing vouchers were hard to find, and getting a landlord to accept them was harder still. Many of the veterans had resigned themselves to staying on the streets. “I'm hoping for a miracle,” one told the researchers. “It probably won't happen.”

“You sometimes hear people say that these folks are on the street because they're 'service resistant,'” Hunter said. “It's really that too many services are client resistant. If any one of us who are housed had to go through what a person experiencing homelessness has to go through, just to find housing, we might not make it either.”

The veterans in the study were often in poor health, fatigued, struggling with physical ailments like arthritis or high blood pressure, and mental conditions like anxiety or depression. One in four had some kind of substance-use problem. Most had been on the streets long enough to have been assaulted, robbed, or both.

Then COVID struck. Services they needed shut down or went online. The emergency rooms they used became places to fear. Like everyone else, they worried about their health and the safety of others. They wore masks and tried to stay six feet apart. But even as case counts soared, their housing status caused them more distress than the fear of disease.

“That really points to how all-consuming it is to not have access to housing,” said Benjamin Henwood, a USC researcher and expert on housing and homelessness, who helped lead the study. “It even trumps these larger concerns that the rest of us were having, the largest shock of our lives.”

The pandemic forced cities and states to get creative. Many, like California, rushed to get people off the streets and into hotel rooms, where they could at least isolate and keep their distance from others. Five of the 26 veterans in RAND's study found housing through that kind of initiative.

Twelve others also made it inside for at least part of the study year, most often in transitional housing programs. During the months they were housed, they reported fewer mental health symptoms, less fatigue and distress, and better health overall. They spent less time in the emergency room, more time on their medications—and many used the opportunity to pursue their VA benefits. One learned she had health insurance and an open bank account with a small amount of money in it. She had spent two years living in her car with her husband and young daughter.

For most of the veterans, though, the housing they found was only a temporary reprieve from the streets. Only three had moved into permanent housing by the end of the study year. And nine of the 26 veterans never even made it into stable housing for more than a week or two.

“Everyone says they're practicing 'housing first,' getting people off the streets quickly, into stable housing, and then addressing whatever health needs they have,” Hunter said. “That's not what we saw. People have to wait months, sometimes years, for a place to come open for them.”

Housing vouchers were hard to find, and getting a landlord to accept them was harder still. Many of the veterans had resigned themselves to staying on the streets.

The VA has since moved hundreds of veterans from the streets of Los Angeles into stable housing programs, including those who were living on Veterans Row. It handed out cell phones during the pandemic to keep homeless veterans connected to services inside and outside of its gates. But the work continues. The VA plans to build at least 1,200 units of supportive housing for homeless and at-risk veterans and their families on its West Los Angeles campus.

RAND's study underscored the need for cities like Los Angeles to make significant investments in creating more affordable housing, to get people off the streets and break their reliance on expensive safety-net services like hospital emergency rooms. Officials also need to stop repeating the myth that people experiencing homelessness don't want help, that not having a roof is just a trade they have made for the freedom of the streets. The veterans in RAND's study wanted to come inside.

For Jocelyn, that goal seemed so close she could almost reach it as 2021 rolled into 2022. She had a VA voucher for an apartment, a ticket off the streets. She talked about expanding her artwork into jewelry or leatherwork, maybe even finishing that college degree she always wanted. Then she caught herself.

“I don't… I just don't trust that it's going to last very long,” she said. “That's my biggest fear, that I'm going to end up back on the street. It happens every time. Every time I get comfortable, something drags the rug out from under my feet.”

Her move-in date came and went. The apartment wasn't ready. There were paperwork delays. A week went by, and then another, and then another. Just a process, she told herself as she pulled the blankets around her in the front seat of her car. Nothing she could do about it but wait.