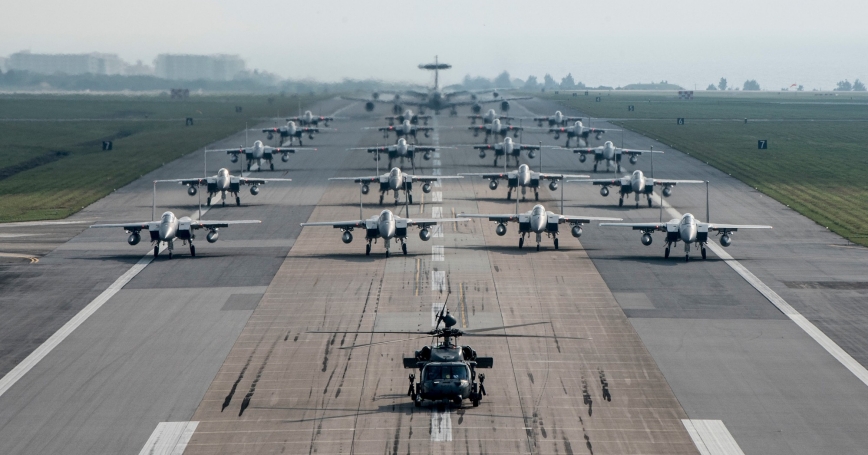 Fully armed aircraft from the 18th Wing conduct an elephant walk during an exercise at Kadena Air Base, Japan, April 12, 2017

William Shelton was a junior in high school when he got an unexpected call that set him on a path to RAND. The caller was an Air Force recruiter asking if he was interested in an ROTC scholarship. He was. One Air Force career later, having managed hundreds of millions of dollars in programs and initiatives, he retired as a colonel and went looking for new opportunities to serve.

He had spent a year at RAND as an Air Force fellow; one of the projects he worked on anticipated virtual air staff meetings 15 years before Zoom even existed. When researchers he had worked with encouraged him to return, he didn't need much prodding. He joined RAND as an engineer.

He specializes in improving the process—he would say the art—of government acquisition, from purchasing to program management to quality assurance. His work has helped the Air Force, the Navy, and the Department of Homeland Security analyze poorly performing programs, assess rising program costs, and strengthen their acquisition workforces. One of his most recent projects provided guidance for the U.S. Space Force as it builds its acquisition programs from the ground up.

How would you describe defense acquisition for a layperson?

People actually do acquisition and program management every day. If you're buying a house, for example, you've got a set of requirements, a budget, a timeline that you're working with. That's what I was doing, only for fighter airplanes or the command and control systems for a ballistic missile. 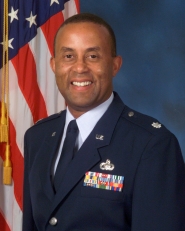 In 2001, for instance, I was the program director for the Link 16 program at Hanscom Air Force Base. Link 16 was a data link that allowed U.S. and NATO forces to share information. I was there on 9/11, and we got a directive from the Chief of Staff that we were going to put it in all of the combat air forces, and we needed to get it done quickly. I'm a lieutenant colonel at the time, I've got a $100 million–plus budget, and I've got about 100 folks that work for me—and we got it done. I had team members who were taking boxes out into the field and putting them in F-15s, F-16s. It was a tremendous feeling of accomplishment: Give people the opportunity and they can excel.

What's a lesson that you learned in the Air Force that you apply now at RAND?

At one point, I was working with a two-star general on the Joint Strike Fighter program. Instead of just calling me into her office, she came to mine, two buildings away, sat down at the desk with me, and we talked about the pros and cons of the program. What that really showed me was this: She went to where the information was. It doesn't matter what grade or rank a person has; you go to where the information is.

Are there any overarching problems you're trying to solve with your research?

“Acquisition reform” has long been a buzzword in Congress and the Pentagon and the newspapers. I've always thought the focus wasn't on the right part. They all look at the laws, the policies, and the regulations, and say, “Change this, change that,” and it just piles up. It's good, it's necessary, but it's not sufficient. You have to focus on what motivates people to behave the way they do. If you don't have a motivated, focused team, no matter how simple the rules and regulations are, they're not going to get it done. You can't just try to regulate that with more laws and policies.

If you don't have a motivated, focused team, no matter how simple the rules and regulations are, they're not going to get it done.

I was very fortunate to be part of a project looking at space acquisition in light of the stand-up of the U.S. Space Force. It has this clean slate, a unique opportunity to create a culture that will perform the way it wants it to. We looked at governance, we looked at how you build a motivated workforce, we looked at how you could break down some of the artificial walls that often separate the acquisitions community from the operations community. One of our recommendations was that all senior officers should do a tour in private industry. Just take a year or two, go work at a company, and then bring what you learn back to the Space Force.

I'm still working to help build the Space Force from an acquisitions perspective. But I'm also getting ready to go on a temporary assignment to support the Office of the Under Secretary of Defense for Research and Engineering. I've always had a few things I look for before I take a job, and this is what brought me to RAND, too. An opportunity to serve something bigger than myself—check. Being able to contribute to big solutions for big problems that are of national import—check. And being able to fit into the culture, to the ethos of the people there—check.