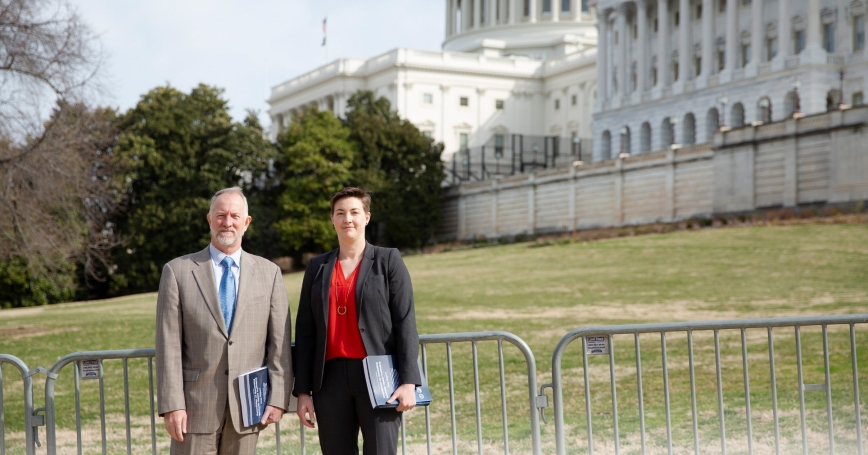 David Luckey, a senior international and defense researcher, and Jayme Fuglesten, director of Congressional Relations at RAND, on Capitol Hill

America's overdose crisis, driven by powerful synthetic opioids such as fentanyl, has become one of the “most pressing national security, law enforcement, and public health challenges” facing the nation. That's the consensus of a top-level commission, guided by RAND, that brought together Republicans and Democrats, members of Congress and White House advisers, to meet that challenge.

Around 100,000 Americans died of drug overdoses between April 2020 and April 2021. Nearly two-thirds of those deaths involved synthetic opioids. A dose the size of a few grains of salt is enough to kill. As little as 3 metric tons of synthetic opioids, smuggled across the U.S.–Mexico border in pills or packets, or shipped by mail from China, could satisfy American demand that in 2016 added up to 47 metric tons of heroin.

The Commission on Combating Synthetic Opioid Trafficking issued its final report earlier this year. It called for a whole-of-nation effort to shut off the flow of illicit opioids, expand access to treatment, and drive down the death toll with overdose-reversing drugs like naloxone and other harm-reduction efforts. It involved four sitting members of Congress; officials from seven executive-branch departments; four nongovernmental experts; and the support of more than 60 RAND researchers, analysts, and associates.

David Luckey, a senior international and defense researcher at RAND, helped lead the commission's research and draft its report. He came to RAND after nearly four decades of service in the federal government, most recently as director of homeland security for the Senate Committee on Homeland Security and Governmental Affairs. Jayme Fuglesten, RAND's director of Congressional Relations and a former Senate aide, served as a guide to help the project team navigate the different—and sometimes competing—political and policy agendas of the commission members.

What was RAND's role in the commission's work?

David Luckey: The short answer is that RAND, through the Homeland Security Operational Analysis Center, conducted the commission's research and analysis and drafted its report. But I would suggest that RAND's role, really, was to bring together the breadth and depth of our abilities to tackle this challenge that is so large and so daunting and so wicked. This isn't just about drug policy or drug law. This involves national security, homeland security, intelligence, diplomacy, supply chain issues, cryptocurrency. We were able to draw on RAND's expertise across all those areas.

What do people not understand, or misunderstand, about this challenge?

Luckey: This is a crisis that affects everyone in one way or another, and I'm speaking literally. You know someone who died from this, or you know someone who knows someone who died from this. Two degrees of separation is all you get. We had 15 commissioners. One had a son die of a fentanyl overdose, and another had a nephew who did. This is an indiscriminate poison. The folks who are making this stuff are not chemists, and more people are dying from this, and more people will die.

Jayme Fuglesten: That really added urgency to the commission's work. We've seen the consequences of synthetic opioids in the illegal drug supply; we've seen the consequences in our communities. During the course of the project, we hit this really grave milestone: 100,000 overdoses deaths in one 12-month period, approximately 65,000 of them from synthetic opioids. Everyone understood the urgency of our work.

What would you say is the main message of the commission's report?

Luckey: It's a call to action about what it's going to take to save American lives. This report is only the beginning of addressing the challenge and creating a consensus on the strategic approach to combating illegal synthetic opioids.

Fuglesten: When you talk about synthetic opioids, the challenge is harder and the consequences are much more lethal. On a positive note, the message from the report is that there is a bipartisan consensus on the seriousness of this problem, and there is a bipartisan road map to advance some real, credible solutions to dealing with it.

Are you optimistic that this is something toward which we can mount an effective response?

Luckey: We must. I look at this as a challenge like 9/11. On 9/11, roughly 3,000 Americans were killed, and in response to that, the United States came together and put forth a bipartisan, whole-of-government, whole-of-nation effort. Can you imagine if the 65,000 people who died from synthetic opioids in the past year were all killed on one day? The difference is that it happens day after day, and Americans get anesthetized to it. But even if this report has only a modest effect—let's just say we can reduce the number of those deaths by 10 percent, an extremely modest amount—that's more every year than died on 9/11.

Fuglesten: It was encouraging to see the level of bipartisanship and commitment to this single issue from across the aisle, across the political spectrum. Everyone had a different perspective, but what they ultimately wanted was a consensus plan around saving lives, and that's what they got. That's a positive message that the American people don't hear as often about Congress and the federal government writ large.

What made you personally want to be involved in this project?

Fuglesten: This is the kind of work we all come to RAND to do. We had 15 commission members, including from Congress, outside experts who are the big names in this area, executive-branch directors working together on this—these are the people who are going to be most responsible for the solutions that came from this report. This is such a serious problem, but we knew we could make a difference.

Luckey: I spent 33 years in the federal government, and the rest of my career supporting the federal government; this was an opportunity to be part of something that could have an immense impact on the welfare of the nation's most precious asset, our people. That's why I wanted to be part of it. There are few times in this life when I can look back and say, what an impact we had. This is definitely one of those occasions.