Russia's Ambitions and the War in Ukraine: Q&A with Dara Massicot 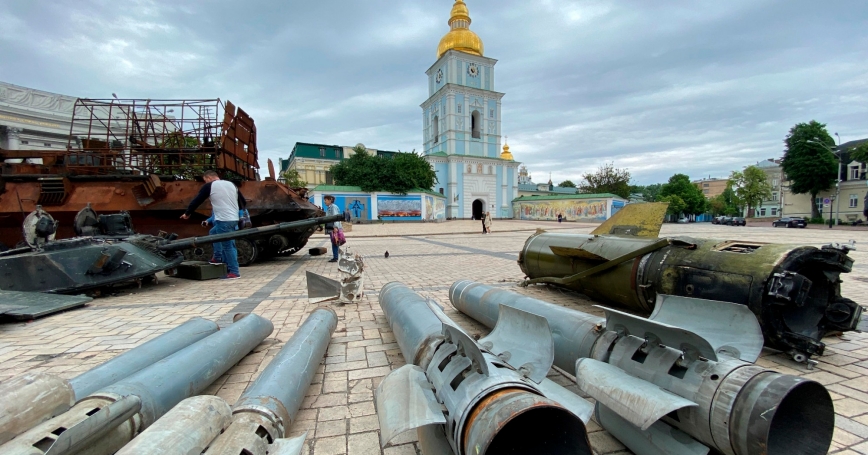 “I wanted to be wrong,” Dara Massicot tweeted on the evening of February 23. It was just before dawn on the following day in Moscow and Kyiv, and the Russian invasion of Ukraine had begun. “The next days and weeks will be dark times and a humanitarian catastrophe.”

Massicot is a senior policy researcher at RAND who specializes in Russian military strategy. Long before the war in Ukraine, she had documented a shift in Russian thinking and posture toward its neighbor, a focus on reining it back from the West at all costs. She had also detailed serious shortcomings in Russian ground forces, and an overall lack of preparation for a major ground war.

She came to RAND from the U.S. Department of Defense, where she served as a senior analyst for Russian military capabilities. But her interest goes back even further. As a teenager, she convinced her high school to let her take Russian language classes at a nearby university.

She had no illusions as Russian forces gathered on the Ukrainian border. “What unnerves me is how methodically they're going through this,” she told The New York Times weeks before the invasion began. “It's by the book. You know what's coming next and it shows up.”

What developments are you watching for as indicators of what comes next?

The Russians really downscaled their ambitions when they encountered such significant resistance and suffered such significant losses. I'm watching what they're doing with their offensives in eastern Ukraine, and whether they try to accelerate an end to this phase of the conflict by announcing the annexation of parts of Ukraine. On the Ukraine side, I'm keeping an eye on controlled withdrawals that we're starting to see in a few places.

Is there a word or phrase in Russian that could provide some insight into the war?

I have one, but it's curse word–adjacent in Russian, so I won't use it.

But there is a Soviet war poem from World War II that I keep thinking about. It was written by Yulia Drunina, a nurse, and the rough translation is: “I have seen hand-to-hand combat once in real life and a thousand times in dreams. Those who say that war isn't terrible know nothing about war.”

The war in Ukraine is such an ugly, high-casualty event. The way they're fighting it is so hard, and the scars that both sides are sustaining will outlast this conflict for generations to come.

The war in Ukraine is such an ugly, high-casualty event. The way they're fighting it is so hard, and the scars that both sides are sustaining will outlast this conflict for generations to come.

You wrote recently about Russia's 'culture of indifference' to its own soldiers. How do you see that shaping the future of the conflict?

Russia made a series of incorrect assumptions about Ukraine's will to fight and, as a result, they had insufficient planning around force protection. The Russian military has suffered significant casualties because of that, and that has really hurt unit cohesion and morale. What we're seeing now is small units just trying to execute their orders and survive.

The Ukrainians intercepted a message that seems to be a Russian soldier talking to his wife. He's telling her, 'The only way I'm getting out of Ukraine is if I'm killed or injured.' But then they drift to talking about their young son, and the soldier says, 'The last thing I want—I want you to make sure he does not join the army. Talk to my mom, get my uncle to do this.' He's walking through this administrative process to pull strings so his son won't have to serve when he turns 18.

If that's true, it's such a warning shot for Russian leaders about the damage they've done to their own professional enlisted group.

You've studied Russian grand strategy. What lessons do you think Russia takes from this conflict? Does it look or act any differently going forward?

My coauthors and I looked at official strategy documents, but also at how Russia has allocated its resources. We concluded that they don't have a force that is structured to do what they attempted to do—that is, a large land invasion of one of the biggest countries on the continent.

Now, with their expenditures in Ukraine and the sanctions starting to bite and their growing isolation, it's going to be extremely difficult for them to restore their military capabilities. We also found that Russia did not have tight control over other countries in its so-called sphere of influence, and that trend is going to continue now that its economic influence might be on shaky ground.

When future historians look back on this, what question do you most want to know the answer to?

I hope we'll understand the extent to which the Russian high command knew about all of the problems that were hidden at lower levels within their force. Did they know, and thought they could get away with this war because the Ukrainians wouldn't fight back? Or were they totally oblivious to what was happening on the ground in their own units?

What made you want to become an expert on Russia?

It's a land of such extreme contrasts. It has beautiful landscapes, incredibly warm friendships and family ties, a rich history of intellectual ideas—and yet, it can also be such a brutal and dangerous place. When I first started studying Russia in the late 1990s, the narrative was that the Cold War was over and Russia was beaten. But that's not how the Russians saw themselves.

Is there an overarching question that you're trying to answer with your research?

My goal is, and always has been, to accurately forecast what the Russian military is doing. They're not—they were never—weak or irrelevant. But nor are they the Soviet war machine anymore. So my goal is to forecast what they're doing, and what it means for the United States.