Improving Recruitment and Retention in the New Orleans Police Department 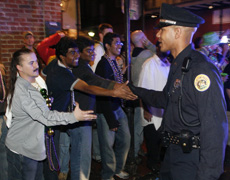 Presented by The RAND Safety and Justice Program in conjunction with the RAND Gulf States Policy Institute.

Hurricane Katrina and the flooding that followed largely disabled the New Orleans Police Department (NOPD) and other city first responders. At the request of the NOPD RAND Corporation took a quick look study to help address the NOPD’s recruiting and retention problems and found that some low-cost initiatives can address these problems.

Dr. Bernard Rostker rejoined RAND as a Senior Fellow in January 2001, after serving as the Under Secretary of Defense for Personnel and Readiness (2000-2001). Prior to that, he served Under Secretary of the Army (1998-2000), Assistant Secretary of the Navy for Manpower and Reserve Affairs (1994-1998), Special Assistant to the Deputy Secretary of Defense of Gulf War Illnesses. (1996-2001), and Director of Selective Service (1979-1981). He received the Distinguished Service Award five times for his service to the U.S. Government. He is also a Fellow of the National Academy of Public Administration. Since returning to RAND his research has focused on personnel issues for the DoD and several local police departments. He is the author of the critically acclaimed book, I Want You: The Evolution of the All-Volunteer Force.

Recruitment and Retention: Lessons for the New Orleans Police Department

Since Hurricane Katrina, resignations from the New Orleans Police Department (NOPD) have increased, and the department went more than a year without recruiting enough candidates to justify a police academy training course. This study presents practical recommendations for change that could help the NOPD improve recruiting and retention. Issues addressed include the lack of affordable post-Katrina housing, the fact that the families of many police officers no longer live in the New Orleans area, the destroyed departmental infrastructure, and a budget that does not provide enough resources to meet basic needs. The study focuses on compensation, including housing; the promotion process and the career management system; recruiting; the mix of officers and civilians; and ways to improve the morale of the NOPD. The recommendations, which are specifically tailored to the unique circumstances of the NOPD, include (1) using civilian employees, where appropriate, for jobs currently being performed by uniformed officers; (2) developing a proactive recruiting program; (3) offering some of the city's housing stock in-kind to police officers or selling the property and using the proceeds to improve compensation; (4) increasing the frequency of promotion examinations; (5) eliminating the backlog of promotions to higher levels in the department; (6) restructuring compensation to attract recruits and retain serving officers; (7) establishing a first-responders charter school; and (8) rebuilding the police infrastructure to improve morale.