War by Other Means—Building Complete and Balanced Capabilities for Counterinsurgency 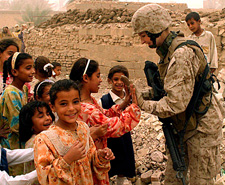 Insurgencies like those in Iraq and Afghanistan are likely to be a feature of the global security environment for the foreseeable future. In an upcoming major RAND report, RAND Senior Fellow David Gompert and Senior Policy Analyst John Gordon examine the challenge of insurgency in the 21st century, what capabilities are needed to meet this challenge, and what investments, multilateral initiatives, and other measures the U.S. government should undertake to create these capabilities.

Given the importance of nonmilitary measures to successful counterinsurgency, the report addresses civil instruments as well as military capabilities. The authors estimate that it would take $20-30 billion annually to give the United States the more complete and balanced counterinsurgency capabilities it needs to counter insurgencies like those in Iraq and Afghanistan. The necessary investments would be divided among:

David C. Gompert is a Senior Fellow at the RAND Corporation and a member of the faculty of the Pardee RAND Graduate School. Prior to this, he was Distinguished Research Professor at the Center for Technology and National Security Policy, National Defense University. His government positions have included Senior Advisor for National Security and Defense, Iraq (2003-2004); Special Assistant to President George H. W. Bush (1990-1993); and at the State Department, Deputy to the Under Secretary of State for Political Affairs, Deputy Assistant Secretary for European Affairs, Deputy Director for Political-Military Affairs, and Special Assistant to the Secretary of State (1975-1983). At RAND, he has been Vice President and Director of the National Defense Research Institute (1993 to 2000) and President of RAND Europe (2000-2003). He has published extensively in the field of national security policy, defense strategy, information technology, and world politics.

John Gordon is a Senior Policy Analyst at the RAND Corporation. Dr. Gordon joined RAND in 1997 following a 20-year U.S. Army career. Since joining RAND, he has participated in and led numerous studies for the Office of the Secretary of Defense and the Departments of the Army and Navy. Dr Gordon has authored or co-authored numerous RAND reports on various national security issues. He has led or participated in RAND research projects for the governments of the United Kingdom, Sweden, Italy, and Germany. He is also an adjunct faculty member at Georgetown and George Mason Universities.