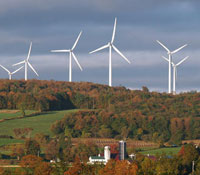 The RAND Corporation will present the findings of a study that assessed the potential impacts on U.S. consumer energy expenditures and CO2 emissions of producing 25 percent of U.S. electric power and motor-vehicle transportation fuels from renewable resources by the year 2025.

Michael Toman is a senior economist and director of the RAND Environment, Energy, and Economic Development Program, part of the RAND Infrastructure, Safety, and Environment Unit. Prior to joining RAND, Mike worked on sustainable energy, energy security and climate change at the Inter-American Development Bank and at Resources for the Future. From 1994-1996 Mike served as a senior staff economist for the Council of Economic Advisers, Executive Office of the President, handling energy and environmental issues for the Council. Mike is the author of numerous articles, journals, and other scholarly works. He is an adjunct faculty member at the Nitze School of International Studies, Johns Hopkins University and at the Bren School of the Environment, University of California at Santa Barbara.