Piracy and Armed Violence at Sea: How Can Policymakers Make the World’s Oceans Safer? 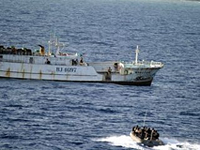 This year pirates have attacked almost 100 vessels off Somalia's coast. Clearly, piracy and armed violence at sea are on the rise. In the period 2000 to 2006, the incidence of piracy rose 68 percent compared to the previous six years.

These trends are the result of a range of phenomena, including a surge in commercial maritime traffic and a decline of coastal and port-side security (because of financial instability or government corruption). Maritime surveillance has proved challenging even for the United States because of the technical difficulties associated with inspecting incoming cargo and the need to balance sea- and land-based security requirements.

Peter Chalk, a Senior Analyst with the RAND Corporation recently published a study: "The Maritime Dimension of International Security: Terrorism, Piracy, and Challenges for the United States." This report, released several months ago, contains relevant insights which can be applied to the recent armed violence on the open seas. Chalk offers some valuable insights and recommendations for policymakers. He will present those insights and recommendations at a Congressional briefing on December 9, 2008.

Peter Chalk is a Senior Policy Analyst with the RAND Corporation. He has worked on a range of projects, including studies examining unconventional security threats in Southeast and South Asia; new strategic challenges for the US Airforce (USAF) in Latin America, Africa and South Asia; evolving trends in national and international terrorism; Australian defense and foreign policy; international organized crime; the transnational spread of disease; U.S. military links in the Asia-Pacific; and internal security reform in Pakistan. Prior to joining RAND, Dr. Chalk was an Assistant Professor of Politics at the University of Queensland, Brisbane, and a Postdoctoral Fellow in the Strategic and Defense Studies Centre of the Australian National University, Canberra.