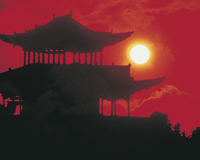 The rise of China's economic, military, and diplomatic power in Asia has prompted worries that it is nudging aside U.S. influence in the Asia- Pacific region. The authors examined six specific U.S. allies and partners—Australia, Japan, the Philippines, Singapore, South Korea, and Thailand—assessing the responses of each nation to China and the implications for U.S. regional security interests. While all six nations see China primarily as a source of economic opportunity, many have concerns about China's regional goals. U.S. security commitments are reassuring, bolstering their ability to engage China with confidence. Each wants U.S. involvement in the region to continue—but sometimes only in certain ways, at certain times, and on particular issues Thus, they are pulling China closer for the economic opportunities it offers and the United States closer for the general reassurance its long standing power and influence provide.

This book is part of a substantial and growing body of RAND Corporation research—now spanning over a decade— examining the changing regional security environment in Asia and, specifically, China's improving diplomatic and military capabilities. It should be of interest to policymakers focused on ensuring that the United States maintains maximum access to the region and maximum freedom of maneuver in conducting U.S. diplomacy and military affairs. It should also be of interest to specialists and students of Pacific Affairs and China.

Evan S. Medeiros (Ph.D., London School of Economics and Political Science) is a senior political scientist with the RAND Corporation. He specializes in research on the international politics of East Asia, China's foreign and national security policy, U.S.-China relations and Chinese defense industrial issues. He recently returned from a year of service with the Treasury Department. Dr. Medeiros served as Policy Advisor to the Special Envoy for China and the Strategic Economic Dialogue and was sponsored by the prestigious Council on Foreign Relations International Affairs Fellowship.