Revitalizing the Transatlantic Security Partnership: An Agenda For Action 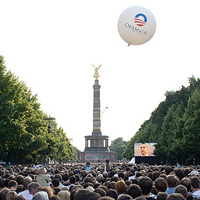 In the coming decade, the United States and Europe face a daunting array of challenges that are so complex and demanding that neither the United States nor Europe can manage them on their own. The election of President Barack Obama provides an opportunity to overcome many of the divisions that have bedeviled U.S.–European relations in recent years and to give the transatlantic partnership new dynamism and vision.

To successfully address upcoming challenges, a new transatlantic security partnership must be crafted that reflects both global and political realities. This will require not only closer cooperation between the United States and its European allies but a new vision and mind-set on both sides of the Atlantic.

The panel will discuss key conclusions and policy recommendations of the new report by the RAND Corporation and the Bertelsmann Stiftung Revitalizing the Transatlantic Security Partnership: An Agenda for Action.

The Panelists will include:

The Moderators will be:

For more than 60 years, RAND has provided policymakers with independent, objective research and analysis on key national security, domestic and international issues. RAND work helps members of Congress and their staffs make better-informed decisions on the nation's pressing challenges. The Office of Congressional Relations offers a number of products and services to educate, inform, and facilitate congressional policymakers' access to RAND work, including coordinating congressional testimony by RAND experts, organizing briefings and meetings, synthesizing RAND work into topical e-newsletters and providing reports and publications to congressional offices. For more information, visit the Office of Congressional Relations webpage, contact ocr@rand.org or call (703) 413-1100 x5395.