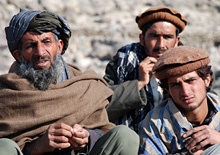 As NATO and U.S. forces plan to withdraw from Afghanistan, the question arises as to whether projected increases of Afghan National Security Forces (ANSF) will suffice. Some argue that civilian defense forces to complement ANSF will be needed to improve counterinsurgency prospects and help impede Taliban efforts to expand their "shadow government." Others argue that establishing civilian defense forces will actually facilitate the resurgence of warlord militias, weaken the central government, and promote violence in the countryside.

This briefing will consider successful programs that have been used in other parts of the world in which local residents have helped provide security to their own communities, and the viability of emulating such counterinsurgency efforts in Afghanistan over the short and long term.

Prior to joining RAND in February 2009, Arturo Munoz served 29 years at the Central Intelligence Agency, both in the Directorate of Operations and in the Directorate of Intelligence. He created successful counterterrorism, counterinsurgency, and counternarcotics programs, from initial planning to full implementation in the field. As an analyst, he wrote groundbreaking intelligence assessments on insurgent movements in Latin America, which pioneered the application of anthropology to intelligence. In various supervisory positions, both at headquarters and in the field, he managed campaigns with verifiable impact in Latin America, Southwest Asia, the Balkans, the Middle East, and North Africa.