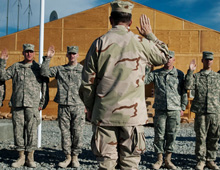 This briefing will describe, among other things

James Hosek's research focuses on national security manpower in the areas of recruiting, retention, compensation, deployment, personnel quality, and the science and engineering workforce. He is a professor at the Pardee RAND Graduate School and editor-in-chief of the RAND Journal of Economics, a leading peer-reviewed journal on industrial organization and microeconomics. He chaired the Economic Advisory Council of the California Institute for Federal Policy Research and served on several Quadrennial Reviews of Military Compensation. He received his Ph.D. in economics from the University of Chicago.

Beth Asch has been involved in and led many RAND studies on the recruitment, retention, compensation, retirement, and performance incentives of personnel in the U.S. military and federal civil service. Her recent research projects include analyzing retirement system alternatives for the active and reserve components, analyzing compensation alternatives to retain officers, the recruitment of minorities in the military, the effect of cash incentives on recruiting and attrition, and increasing the supply of personnel with language capability in the Intelligence Community. She is a professor at the Pardee RAND Graduate School. She received her Ph.D. in economics from the University of Chicago.