Nurturing the Arab Spring: What Can Be Done to Remove Existing Barriers to Freedom of Expression in the Arab World? 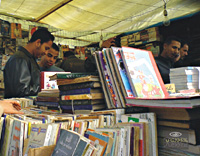 This briefing will discuss historical barriers to dissemination of books, film, and media that promote tolerance and critical thinking in the Arab world; examine a selection of creative works and how those barriers affected their distribution; and present policy recommendations to help these countries develop widely available and diverse media content.

Lowell H. Schwartz is a political scientist at the RAND Corporation. In 2009 and 2010, Schwartz worked for the Office of the Secretary of Defense, International Security Affairs (OSD/ISA) as an adviser on arms control and European security. His RAND research falls primarily into three areas: the evolution of strategic warfare from a bipolar to a multipolar world, including nuclear strategy and arms control; how public diplomacy/strategic communications can help shape public opinion abroad; and the potential impact of future security environments on U.S. national security strategy and defense planning.

Jeffrey Martini is a project associate at the RAND Corporation where he specializes in Middle East political and security issues. He has coauthored numerous studies including an assessment of the impact of Arab media on political reform in the region and the communications strategies of al-Qa'ida and associated groups. In addition to RAND research, Martini has also written for outside publications on Islamist movements and challenges to state authority in the Middle East and North Africa.