Maintaining Accountability and Nurturing Innovation through a Reauthorized ESEA 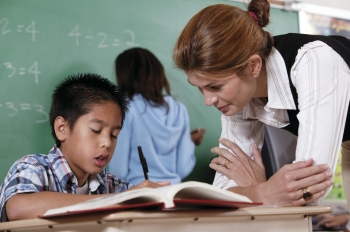 More than four years have passed since the expiration of the Elementary and Secondary Education Act (ESEA) of 2001—more popularly known as The No Child Left Behind Act (or NCLB). This past year has seen a renewed push for reauthorization, with the Senate HELP Committee introducing a bipartisan reauthorization bill and the House Education & Workforce Committee holding several hearings. Despite broad agreement that the law needs amending, Congress is still struggling to develop the specifics of that consensus.

The reauthorization of ESEA will require several critical decisions about standards, assessments, reporting requirements, and school improvement initiatives. Some degree of consistency in standards and assessments across states will be necessary for enabling policymakers and the public to compare outcomes among states, and high-quality assessments are an indispensible ingredient in an accountability system that promotes beneficial responses. It will also be important to encourage states to adopt reporting strategies that enable stakeholders to make effective decisions, and to adopt an approach to school improvement that balances accountability and autonomy at the school and district levels. Researchers at the RAND Corporation will offer recommendations for how best to create conditions for these vital elements.

Darleen Opfer is director of RAND Education and holds the Distinguished Chair in Education Policy at the RAND Corporation. Before joining RAND in April 2011, Opfer served on the faculty of education at the University of Cambridge in England, where she was director of research and senior lecturer in research methods and school improvement. Prior to her work in Cambridge, she served as director of the Ohio Collaborative, a policy research center at Ohio State University, where she was also an associate professor of research methods. Opfer was also an assistant professor at Georgia State University and research director for the Virginia Institute of Government at the University of Virginia. Opfer holds a Ph.D. in education policy studies from the University of Virginia.

Susan M. Gates is a senior economist specializing in the economics of organizations, political economy, and applications of economic management principles to public-sector organizations, with a special interest in public-sector leadership and entrepreneurship. She is also a professor at the Pardee RAND Graduate School. Gates has led projects on a wide range of topics including whether the U.S. health insurance system is a barrier to entrepreneurship, the career paths of school principals and superintendents, the impact of DoD outsourcing efforts on the civil service workforce, civilian workforce requirements in the DoD, and intern programs as a recruiting tool for the DoD. Gates received her Ph.D. in economic analysis and policy from the Stanford Graduate School of Business, Stanford University.

Laura Hamilton is a senior behavioral scientist at the RAND Corporation, a professor at the Pardee RAND Graduate School, and an adjunct associate professor in the University of Pittsburgh's Learning Sciences and Policy program. Her research focuses on educational assessment, accountability, instructional practices, and school reform. She has directed several large studies, including an investigation of the implementation of standards-based accountability in response to No Child Left Behind, an investigation of relationships between student achievement and teachers instructional practices in mathematics and science, and an evaluation of a leadership development program for principals in urban school districts. She has served on a number of national and state panels, including the Brookings National Commission on Choice in K-12 Education, the Center on Education Policy's Advisory Panel on Student Achievement Under No Child Left Behind and its Panel on High School Exit Exams, and the APA/AERA/NCME Joint Committee to Revise the Standards for Educational and Psychological Testing. Hamilton received her Ph.D. from Stanford University.

Jennifer L. Steele is a policy researcher at the RAND Corporation, where she studies teacher quality, school reform, and data-based decisionmaking in schools. She recently led a multi-state study of veterans' access to education benefits on college campuses, as well as an examination of how states and districts are incorporating student performance into teacher evaluation systems, a project to develop educational technology usage indicators for the Lenovo Corporation, and an examination of the impact of financial incentives on the distribution of academically talented teachers in California. She also recently co-led a U.S. Department of Education-funded study of the policies of charter and traditional schools in post-Katrina New Orleans. Her other projects have included estimating implementation effects for a randomized field trial of a computer-based mathematics curriculum. She received an Ed.D. and Ed.M. in administration, planning, and social policy from Harvard University.