What Are the Prospects for Democratization in the Arab World? 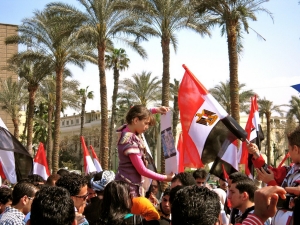 Revolutionary protests in 2011 up-ended long-standing authoritarian regimes in the Arab world. What lies ahead for Egypt, Tunisia, and other countries undergoing political change? How can the challenges of moving from regime change to democratic governance be overcome?

In the recent book Democratization in the Arab World, RAND researchers examined the changes underway as a result of the Arab Spring as well as four decades of democratization successes and setbacks elsewhere around the globe. This report aims to help decisionmakers in Congress and elsewhere understand the challenges ahead, form well-founded expectations, and take practical steps to foster positive change.

Please join us for a briefing and discussion that examines:

Laurel Miller is a senior policy analyst at the RAND Corporation, focusing on national security and foreign policy issues. She has been an adjunct professor at Georgetown University's School of Foreign Service and an adjunct professor of law at Georgetown. She was a senior expert at the U.S. Institute of Peace, where she focused on constitutional issues and rule of law development in countries emerging from conflict, and on international justice issues. During previous government service, she was involved in conflict resolution and post-conflict stabilization, including as senior advisor to the U.S. special envoy for the Balkans, senior advisor to the assistant secretary of state for European affairs, and deputy to the ambassador-at-large for war crimes issues. Miller was involved in peace negotiations in Macedonia, Kosovo, and Bosnia. She also served as director for western hemisphere affairs at the National Security Council. Miller was an International Affairs Fellow of the Council on Foreign Relations; practiced law with the firm of Covington & Burling in Washington, D.C., and Brussels; and clerked for a federal judge of the Ninth Circuit Court of Appeals. Earlier, she was a graduate fellow in India and worked as a reporter in Japan. Miller received her A.B. from the Woodrow Wilson School of Public and International Affairs, Princeton University; and her J.D. from the University of Chicago Law School, where she was an editor of the Law Review.

Jeffrey Martini is a Middle East analyst at the RAND Corporation, where he works on political reform in the Arab world with a specific focus on North Africa. Martini has published on civil-military relations in Egypt, generational divides within the Muslim Brotherhood, changes in the regional security environment, and prospects for democratization in the "Arab Spring" countries. He has spent spent four years living in the Arab world, including three as a Peace Corps volunteer in Morocco and one in Cairo, Egypt, where he was a 2007–08 fellow in the CASA Arabic language program. He speaks, reads, and writes modern standard Arabic and speaks Moroccan and Egyptian colloquial. Martini received his B.A. in political science and economics from Middlebury College and his M.A. in Arab studies from Georgetown University.