Adapting to Climate Change on the Coast: Lessons from Louisiana for Federal Policy 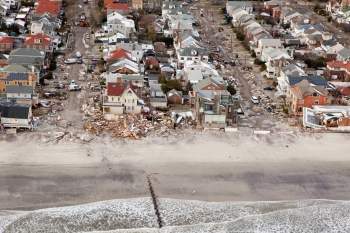 What can be done to reduce the chances of widespread disaster when the next "Sandy" hits?

"Super Storm" Sandy is estimated to have caused upwards of $50 billion in property damage to the mid-Atlantic states, in addition to loss of life and massive disruption to infrastructure systems in New York, New Jersey, and Connecticut. In the next few weeks, the House and Senate will debate whether and how to allocate billions in funds for future flood mitigation in those areas.

Sandy is only the most recent example of the massive damage and disruption caused by storms to coastal areas, however, and these consequences will grow worse as coastal populations continue to grow and sea levels rise. The increasing risks have caused policymakers to rethink how to plan for the coasts: rather than provide assistance only after the event, how can policymakers invest proactively to become more resilient and reduce the potential negative effects of coastal storms?

Given the upcoming House and Senate consideration of flood mitigation efforts, other states and the federal government can learn from Louisiana's post-Katrina planning to better protect coastal populations and restore or rebuild coastal lands. The RAND Corporation assisted Louisiana in developing its 2012 Coastal Master Plan to guide the state's coastal investments and help residents plan for the future. The projects in the plan strike a balance between providing near term benefits to coastal communities and long-term sustainability to Louisiana's coastal landscape.

Jordan Fischbach is an associate policy researcher at RAND and a professor at the Pardee RAND Graduate School. His research focuses on water resources and infrastructure planning, flood risk analysis, climate change adaptation, and developing and applying exploratory modeling and robust decision methods to better manage long term uncertainty. Fischbach led a two-year storm surge and damage assessment for the State of Louisiana to support the development of Louisiana's 2012 Coastal Master Plan, for which he was awarded a President's Choice award at RAND in 2012. He also evaluated the potential for nonstructural investments to reduce future flood risk in New Orleans. Fischbach is currently working with federal agencies, including the Bureau of Reclamation and Environmental Protection Agency, to better incorporate deep uncertainty into their long-term water resources planning efforts. Fischbach earned a B.A. in history from Columbia University in 2001 and a Ph.D. in policy analysis from the Pardee RAND Graduate School in 2010, where he was awarded the Herbert Goldhamer Memorial Award.