Egypt and the Question of U.S. Assistance 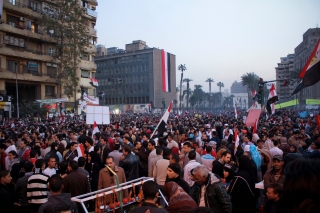 Where is Egypt headed and what role should U.S. aid play right now?

With the ouster of former President Morsi by the Egyptian military, there is a renewed debate over the status of U.S. assistance to Egypt. Some in Congress assert that there is a clear legal requirement that the United States cut off military aid to Egypt. Others say that an exception should be made since the assistance serves important U.S. national security interests.

Should the United States cut off aid? What leverage does the U.S. actually gain from the roughly $1.5 billion in aid it provides Egypt annually? Would cutting it off promote or impair American interests in the region? These questions will be addressed in a moderated discussion designed to inform Congress' approach as it reevaluates assistance to Egypt.

Steven A. Cook is Hasib J. Sabbagh senior fellow for Middle Eastern studies at the Council on Foreign Relations (CFR). He is an expert on Arab and Turkish politics as well as U.S.-Middle East policy. Cook is the author of The Struggle for Egypt: From Nasser to Tahrir Square (Oxford University Press, Fall 2011), which won the Washington Institute for Near East Policy's gold medal for best book on the Middle East in 2012, and Ruling But Not Governing: The Military and Political Development in Egypt, Algeria, and Turkey (Johns Hopkins University Press, 2007). He has published widely in a variety of foreign policy journals, opinion magazines, and newspapers. He currently writes the blog, "From the Potomac to the Euphrates." Prior to joining CFR, Cook was a research fellow at the Brookings Institution (2001–2002) and a Soref research fellow at the Washington Institute for Near East Policy (1995–96). He holds a B.A. in international studies from Vassar College, an M.A. in international relations from the Johns Hopkins School of Advanced International Studies, and both an M.A. and Ph.D. in political science from the University of Pennsylvania.

Michele Dunne is an Atlantic Council vice president and director of the Atlantic Council's Rafik Hariri Center for the Middle East. She has served in the White House on the National Security Council staff, on the State Department's Policy Planning Staff and in its Bureau of Intelligence and Research, and as a diplomat in Cairo and Jerusalem. Prior to joining the Atlantic Council, Dunne was a senior associate at the Carnegie Endowment for International Peace, where she edited the Arab Reform Bulletin and carried out research on Arab politics and U.S. policies. She holds a doctorate in Arabic language and linguistics from Georgetown University, where she has served as a visiting professor of Arabic and Arab studies. Her research interests include Arab politics, political transitions, economic reform, Egypt, Israeli-Palestinian issues, and U.S. and European policies in the Middle East. She co-chairs the Working Group on Egypt, a bipartisan group of experts established in February 2010 to mobilize U.S. government attention to the forces of change in that country.

Jeff Martini is a Middle East analyst for the RAND Corporation who focuses on political and security challenges in the region. He has carried out extensive fieldwork in Egypt since the 2011 Revolution. Those efforts have culminated in reports on the evolution of Egypt's civil-military relations and the challenge of generational divides within the Muslim Brotherhood. Earlier this year he published his groundbreaking Voting Patterns in Post-Mubarak Egypt, which analyzed electoral returns from all four of the post-Mubarak elections in order to glean insights as to the levels of support for various parties across Egypt's regions.